In the first half of the 20th century, during unsuccessful attempts to gain independence and create a state from the territories of the Russian Empire, Poland, and Austria-Hungary, the song was the national anthem of the Ukrainian People's Republic, West Ukrainian People's Republic, and Carpatho-Ukraine, and was once again adopted by independent Ukraine following its secession from the Soviet Union. Before its re-adaptation, a competition for a national anthem among three patriotic songs took place with one of the other songs being "Za Ukrajinu" (English: "For Ukraine") by Mykola Voronyi.

The lyrics constitute a slightly modified original first stanza of the patriotic poem written in 1862 by Pavlo Chubynsky, a prominent ethnographer from the region of Ukraine's capital, Kyiv.[4] In 1863, Mykhailo Verbytsky, a western Ukrainian composer and Greek-Catholic priest composed music to accompany Chubynsky's text.[5] The first choral performance of the piece was at the Ukraine Theatre in Lviv, in 1864.[6] 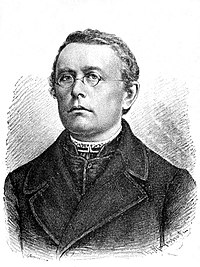 Mykhailo Verbytsky, the composer of the Ukrainian national anthem.

Pavlo Chubynsky, the author of the Ukrainian national anthem's lyrics.

Creation of the Ukrainian national anthem started in the autumn of 1862 during one of Pavlo Chubynsky's parties. Some researchers believe that the Polish national song "Poland Is Not Yet Lost" (Polish: Jeszcze Polska nie zginęła), which later became the national anthem of Poland but dating back to 1797 and the Polish Legions, also had an influence on Chubynsky's lyrics.[7] At the time, the Polish national song was very popular among East European nations of the former Commonwealth of Poland, that were fighting for their independence: a few months after Chubynsky had written his lyrics, the January Uprising began. Likewise influenced by the Polish national song, Slovak poet Samo Tomášik wrote the song "Hey, Slavs", which later became Yugoslavia's anthem in 1944–2003.

The widespread use of Chubynsky's lyrics among Ukrainophiles was very rapid. On October 20 of the same year that Chubynsky wrote the lyrics, the head gendarm Prince Vasily Dolgorukov gave an order to banish Chubynsky for the "dangerous influence on the minds of commoners"[8] and sent him in exile to Arkhangelsk Governorate.[9]

Chubynsky's poem was first officially published in 1863 when it appeared in the fourth issue of Lviv's journal Meta. Soon after the poem became popular in the territories corresponding to today's Western Ukraine, it was noticed by the Ukrainian clergy. Inspired by Pavlo Chubynsky's poem, one of them, Fr. Mykhailo Verbytsky of the Greek-Catholic Church, a prominent Ukrainian composer of his times, decided to write music for it.[5] In 1865 Chubynsky's poem was first published together with Verbytsky's sheet music. The first choral performance of the piece was in 1864 at the Ukraine Theatre in Lviv.[6]

The first recording of this anthem (then spelled "Szcze ne wmerła Ukrajiny ni sława ni wola") in Ukrainian was released on a vinyl record by Columbia Phonograph Company during World War I in 1916.[10][11] As a folk song it was performed by a Ukrainian emigrant from Lviv and New York resident Mychajlo Zazulak in 1915.[12]

However, Chubynsky's poem wasn't used as a state anthem until 1917, when it was adopted by the Ukrainian Republic. Still, even between 1917 and 1921, this anthem was not legislatively adopted as an exclusive state anthem as other anthems were also used at the time.

During the period between 1918 and 1919, Chubynsky's poem was also used as a state anthem of the short-lived West Ukrainian People's Republic.

When the Ukrainian SSR signed the Treaty on the Creation of the USSR with the Russian SFSR, Transcaucasian SFSR and Byelorussian SSR in 1922, the Ukrainian Soviet Socialist Republic was formed, the anthem was immediately banned by the Soviet regime. At the dawn of the Soviet Union, when it was decided that each separate Soviet republic could have its own anthem, the poem Shche ne vmerla Ukraina was rejected in order to suppress separatism amongst Ukrainians. Soviet rulers wanted a text that would state that Ukraine is a country inside the USSR which is "equal among equals, free among the free" and it necessarily had to mention the communist party that lead Ukraine towards communism. This task was accomplished by Pavlo Tychyna, whose version of "Zhyvy, Ukraino, prekrasna i syľna" was the official anthem of the Ukrainian SSR from 1949 to 1991. Composer Anton Lebedynez' wrote the music for it. This anthem never became popular among Ukrainians and in Soviet times, the anthem of the USSR was played during nearly all official events in Ukraine.

On 15 January 1992, the music for the State Anthem of Ukraine was adopted by Ukraine's parliament, the Verkhovna Rada, and was later instituted in the Ukrainian constitution. However, the lyrics for the anthem were not officially adopted until 6 March 2003, when the Verkhovna Rada passed a law on the state anthem of Ukraine (Закон "Про Державний гімн України"), proposed by then president Leonid Kuchma.[3] The law proposed Mykhailo Verbytsky's music and Pavlo Chubynsky's first verse and refrain of his poem "Šče ne vmerla Ukrajina". However, the first stanza of the anthem was to be changed from "Shche ne vmerla Ukraina, ni slava ni volia" to "Shche ne vmerla Ukrainy, i slava i volia".

The law was passed with an overwhelming majority of 334 votes out of 450, with only 46 MPs opposing. Only the members of Socialist Party of Ukraine and Communist Party of Ukraine refrained from the voting. The passing of this law finalised Article 20 of the Constitution of Ukraine. The national anthem that up until then had only officially consisted of Mykhailo Verbytsky's music, would henceforth also include the modified lyrics of Pavlo Chubynsky.

The Ukrainian anthem is amazing. At first it doesn't impress you at all, but that's only at first glance. Indeed, this anthem was created by Mykhailo Verbytsky, clerical composer of the mid-19th century. He lived under the Austrian monarchy, probably was fond of Schubert; he had an euphonic gift – it's clear from his liturgical compositions. He was a church composer. And this patriotic song, he created as a church composer. This chant is a Halleluiah. No other anthem has this! It's a unique piece: the anthem of Ukraine, which at the same time has all characteristic features of a liturgy's beginning. Some memory of a liturgy, of an all-night vigil, has submerged in this anthem. It seems as if wind blows in this simple chant, as if tree branches are singing.

In August 2014, Eurovision singer Zlata Ognevich (Inna Bordyuh) released her own version of "Šče ne vmerla Ukrajina".[14] In May 2016, soldiers from the Band of the 44th Artillery Brigade based in Ternopil performed "Shche ne vmerla Ukraina" from nearly 300 metres underground, breaking a world record.[15]

During the Euromaidan protests, the anthem of Ukraine became a revolutionary anthem for the protesters. In the early weeks of the protests, protesters would sing the national anthem once an hour, led by singer Ruslana.[16]

On 25 March 2014, Mykyta Rubchenko of Kharkiv created an instrumental rock version of the anthem.[17][18]

Šče ne vmerla Ukrajiny, ni slava ni voľa was sung as the de facto national anthem at the inauguration of the first President Leonid Kravchuk on 5 December 1991, but it was not until 6 March 2003 that Chubynsky's poem officially became a part of Ukrainian national anthem.

On 6 March 2003, the Verkhovna Rada of Ukraine adopted anthem's official lyrics, opting to use only the first verse and chorus from Chubynsky's poem, while slightly modifying its first stanza. Instead of stating "Ukraine has not yet died, neither her glory, nor her freedom" (Ще не вмерла Україна, ні слава, ні воля), the concept of Ukraine perishing as a nation has been removed: the opening line now states "Ukraine's glory has not yet died, nor her freedom" (Ще не вмерла України, і слава, і воля).[3]

Article 20 of the Constitution of Ukraine (28 June 1996) designates Verbytsky's music for the national anthem:

The State Anthem of Ukraine is the national anthem set to the music of M. Verbytsky, with words that are confirmed by the law adopted by no less than two-thirds of the constitutional composition of the Verkhovna Rada of Ukraine.