The Sharpeville massacre occurred on 21 March 1960, at the police station in the South African township of Sharpeville in Transvaal (today part of Gauteng).

After a day of demonstrations against pass laws, a crowd of about 7,000 protesters went to the police station. The South African Police opened fire on the crowd, killing 69 people and injuring 180 others. Sources disagree as to the behaviour of the crowd; some state that the crowd was peaceful, while others state that the crowd had been hurling stones at the police, and that the shooting started when the crowd started advancing toward the fence around the police station. There were 249 casualties in total, including 29 children. Many were shot in the back as they fled.[1]

The massacre was photographed by photographer Ian Berry, who initially believed the police were firing blanks.[2] In present-day South Africa, 21 March is celebrated as a public holiday in honour of human rights and to commemorate the Sharpeville massacre.

Life in Sharpeville before the massacre

Sharpeville was first built in 1943 to replace Topville, a nearby township that suffered overcrowding where illnesses like pneumonia were widespread. Due to the illness, removals from Topville began in 1958. Approximately 10,000 Africans were forcibly removed to Sharpeville. Sharpeville had a high rate of unemployment as well as high crime rates. There were also youth problems because many children joined gangs and were affiliated with crimes instead of schools. Furthermore, a new police station was created, from which the police were energetic to check passes, deporting illegal residents, and raiding illegal shebeens.[3] 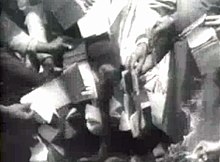 South African governments since the eighteenth century had enacted measures to restrict the flow of black South Africans into cities. Pass laws intended to control and direct their movement and employment were updated in the 1950s. Under the country's National Party government, black residents in urban districts were subject to influx control measures. Individuals over sixteen were required to carry passbooks, which contained an identity card, employment and influx authorisation from a labour bureau, name of employer and address, and details of personal history.[4] Leading up to the Sharpeville massacre, the National Party administration under the leadership of Dr. Hendrik Verwoerd used these laws to enforce greater racial segregation[5] and, in 1959–1960, extended them to include women.[6]:pp.14,528 From the 1960s, the pass laws were the primary instrument used by the state to detain and harass its political opponents.[6]:p.163

The African National Congress (ANC) prepared to initiate a campaign of protests against pass laws. These protests were to begin on 31 March 1960, but the rival Pan-Africanist Congress (PAC), led by Robert Sobukwe, decided to pre-empt the ANC by launching its own campaign ten days earlier, on 21 March, because they believed that the ANC could not win the campaign.[7][8]

On 21 March, a group of between 5,000 and 10,000 people converged on the local police station, offering themselves up for arrest for not carrying their passbooks.[9] The Sharpeville police were not completely unprepared for the demonstration, as they had already driven smaller groups of more militant activists away the previous night.[10]

PAC actively organized to increase turnout to the demonstration, distributing pamphlets and appearing in person to urge people not to go to work on the day of the protest. Many of the civilians present attended voluntarily to support the protest, but there is evidence that the PAC also used coercive means to draw the crowd there, including the cutting of telephone lines into Sharpeville, and preventing bus drivers from driving their routes.[6]:p.534

By 10:00, a large crowd had gathered, and the atmosphere was initially peaceful and festive. Fewer than 20 police officers were present in the station at the start of the protest. Later the crowd grew to about 20,000,[5] and the mood was described as "ugly",[5] prompting about 130 police reinforcements, supported by four Saracen armoured personnel carriers, to be rushed in. The police were armed with firearms, including Sten submachine guns and Lee–Enfield rifles. There was no evidence that anyone in the gathering was armed with anything other than stones.[5]

F-86 Sabre jets and Harvard Trainers approached to within a hundred feet of the ground, flying low over the crowd in an attempt to scatter it. The protesters responded by hurling stones (striking three policemen) and rushing the police barricades. Police officers attempted to use tear gas to repel these advances, but it proved ineffectual, and the police fell back on the use of their batons.[10] At about 13:00 the police tried to arrest a protester, and the crowd surged forward.[5] The shooting began shortly thereafter.[5]

The official figure is that 69 people were killed, including 8 women and 10 children, and 180 injured, including 31 women and 19 children. Many were shot in the back as they turned to flee, causing some to be paralyzed.[1]

Police reports in 1960 claimed that young and inexperienced police officers panicked and opened fire spontaneously, setting off a chain reaction that lasted about forty seconds. It is likely that the police were quick to fire as two months before the massacre, nine constables had been assaulted and killed, some disembowelled, during a raid at Cato Manor.[10] Few of the policemen present had received public order training. Some of them had been on duty for over twenty-four hours without respite.[10] Some insight into the mindset of those on the police force was provided by Lieutenant Colonel Pienaar, the commanding officer of the police reinforcements at Sharpeville, who said in his statement that "the native mentality does not allow them to gather for a peaceful demonstration. For them to gather means violence."[1] He also denied giving any order to fire and stated that he would not have done so.

Other evidence given to the Truth and Reconciliation Commission "the evidence of Commission deponents reveals a degree of deliberation in the decision to open fire at Sharpeville and indicates that the shooting was more than the result of inexperienced and frightened police officers losing their nerve."[6]:p.538 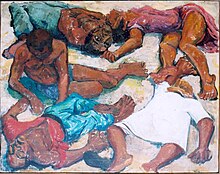 Painting depicting victims of the massacre

The uproar among South Africa's black population was immediate, and the following week saw demonstrations, protest marches, strikes, and riots around the country. On 30 March 1960, the government declared a state of emergency, detaining more than 18,000 people, including prominent anti-apartheid activists who were known as members of the Congress Alliance including Nelson Mandela and some still enmeshed in the Treason Trial.[11]

Many White South Africans were also horrified by the massacre. The poet Duncan Livingstone, a Scottish immigrant from the Isle of Mull who lived in Pretoria, wrote in response to the Massacre the Scottish Gaelic poem Bean Dubh a' Caoidh a Fir a Chaidh a Marbhadh leis a' Phoileas ("A Black Woman Mourns her Husband Killed by the Police").[12]

The Afrikaner poet Ingrid Jonker also mentioned the Sharpeville Massacre in her verse.

A storm of international protest followed the Sharpeville shootings, including sympathetic demonstrations in many countries[13][14] and condemnation by the United Nations. On 1 April 1960, the United Nations Security Council passed Resolution 134. Sharpeville marked a turning point in South Africa's history; the country found itself increasingly isolated in the international community. The event also played a role in South Africa's departure from the Commonwealth of Nations in 1961.[citation needed]

Not all reactions were negative: embroiled in the Civil Rights Movement, the Mississippi House of Representatives voted a resolution supporting the South African government "for its steadfast policy of segregation and the [staunch] adherence to their traditions in the face of overwhelming external agitation."[15][16]

Sharpeville was the site selected by President Nelson Mandela for the signing into law of the Constitution of South Africa on 10 December 1996.[18]

In 1998, the Truth and Reconciliation Commission (TRC) found that the police actions constituted "gross human rights violations in that excessive force was unnecessarily used to stop a gathering of unarmed people."[6]:p.537

On 21 March 2002, the 42nd anniversary of the massacre, a memorial was opened by former President Nelson Mandela as part of the Sharpeville Human Rights Precinct.[19]

International Day for the Elimination of Racial Discrimination

UNESCO marks 21 March as the yearly International Day for the Elimination of Racial Discrimination, in memory of the massacre.