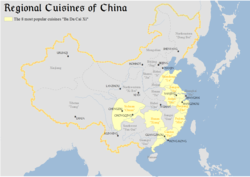 Shandong cuisine (simplified Chinese: 山东菜; traditional Chinese: 山東菜; pinyin: Shāndōngcài), more commonly known in Chinese as Lu cuisine, is one of the Eight Culinary Traditions of Chinese cuisine and one of the Four Great Traditions (四大菜系). It is derived from the native cooking style of Shandong Province, a northern coastal province of China.

Although less available in overseas Chinese restaurants (usually operated by migrants from southern China),[citation needed] Shandong cuisine is considered one of the most influential schools in Chinese cuisine;[3] most of the country's culinary styles have developed from it. Modern cuisines in North China (Beijing, Tianjin and the northeastern regions) are branches of Shandong cuisine, and meals in most Northern Chinese households are typically prepared using simplified Shandong methods.[2]

During the Spring and Autumn period (770-221 BCE), Shandong was a territory of the Qi and Lu states. Both states, with mountains and fertile plains, were economically and culturally developed and had abundant aquatic products, grains and sea salt. Some of the earliest known descriptions of Chinese culinary methods come from the states. Yi Ya, a retainer of Duke Huan of Qi, was renowned for his culinary skill. Confucius (who was born in the Lu state) was quoted in the Analects as saying, "One should not indulge overly in fine flour, or in kuai (a dish akin to carpaccio) that is sliced too thinly". About food, he recommended: "Do not consume food which looks spoiled, smells spoiled, is out of season, is improperly butchered, or is not made with its proper seasoning"; this indicated a level of refinement in food preparation in Shandong at the time.

The cuisine as it is known today was created during the Yuan dynasty. It gradually spread to northern and northeastern China, Beijing and Tianjin, where it influenced Imperial cuisine. Shandong cuisine is primarily made up of eastern Shandong and Jinan dishes.[3]

Although modern transportation has increased the availability of ingredients China, Shandong cuisine remains rooted in tradition. It is noted for its variety of seafood, including scallop, prawn/shrimp, clam, sea cucumber and squid.

In addition to seafood, Shandong is unique for its use of maize[dubious – discuss], a local cash crop not widely cultivated in northern China. Unlike the sweet corn of North America, Shandong maize is chewy, starchy and often has a grassy aroma. It is served as steamed (or boiled) cobs, or the kernels are removed from the cob and lightly fried.

Shandong is noted for its peanuts, which are fragrant and naturally sweet. Large dishes of peanuts (roasted in the shell or shelled and stir-fried with salt) are common at meals, and they are served raw in a number of cold dishes from the region.

Shandong uses a variety of small grains. Millet, wheat, oats and barley can be found in the local diet, often eaten as congee or milled and cooked into a variety of steamed and fried breads. People in Shandong tend to prefer steamed breads rather than rice as a staple food.

Despite its agricultural output, Shandong has not traditionally used the variety of vegetables seen in southern Chinese cooking. Potatoes, tomatoes, cabbages, mushrooms, onions, garlic and eggplant are staple vegetables, with grassy greens, sea grasses and bell peppers also common. The large, sweet cabbages grown in central Shandong are known for their delicate flavour and hardiness; a staple of the winter diet in much of the province, they appear in many dishes.[4]

Shandong's greatest contribution to Chinese cuisine is arguably its vinegar. Hundreds of years of experience and unique local methods have led to the region's prominence in Chinese vinegar production. Unlike the lighter, sharper types of vinegar popular in the south, Shandong vinegar has a complexity which some consider fine enough to stand alone.[5]