Combined sewer Enlarge Sanitary sewer
Infrastructure that conveys sewage or surface runoff using sewers
Not to be confused with Sewage.

Sewerage is the infrastructure that conveys sewage or surface runoff (stormwater, meltwater, rainwater) using sewers. It encompasses components such as receiving drains, manholes, pumping stations, storm overflows, and screening chambers of the combined sewer or sanitary sewer. Sewerage ends at the entry to a sewage treatment plant or at the point of discharge into the environment. It is the system of pipes, chambers, manholes, etc. that conveys the sewage or storm water.

In American colloquial English, "sewer system" is applied more frequently to the large infrastructure of sewers that British speakers more often refer to as "sewerage". 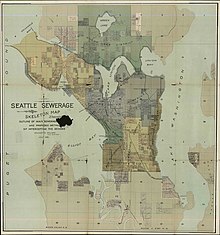 The main part of such a system is made up of large pipes (i.e. the sewers, or "sanitary sewers") that convey the sewage from the point of production to the point of treatment or discharge.

Sewers under construction in Ystad, Sweden

Types of sanitary sewer systems that all usually are gravity sewers include:

Sanitary sewers not relying solely on gravity include:

Severe constraints are applied to sewerage, which may result in premature deterioration. These include root intrusion, joint displacement, cracks, and hole formations that lead to a significant volume of leakage with an overall risk for the environment and public health. For example, it is estimated that 500 million m3 of contaminated water per year can leak into soil and ground-water in Germany.[1] The rehabilitation and replacement of damaged sewers is very costly. Annual rehabilitation costs for Los Angeles County are about €400 million,[2] and in Germany, these costs are estimated to be €100 million.[3]

Vacuuming debris from a sewer line

Hydrogen sulfide (H2S) is indirectly responsible for biogenic sulfide corrosion and consequently, sewers need rehabilitation work. Various repair options are available to owners over a large range of costs and potential durability. One option is the application of a cementitious material based on calcium aluminate cement, after a cleaning of the corroded structure to remove loose material and contaminants in order to expose a sound, rough and clean substrate. Depending on the concrete condition and contamination, the cleaning can range from simple high pressure jet water cleaning (200 bar) up to real hydro-demolition (2000 bars).

One method to ensure sound concrete is exposed is to verify that the surface pH is superior to 10.

As for any concrete repair, the state-of-the-art rules must be followed. After this cleaning step, the cementitious material is applied to the saturated-surface-dry substrate using either:

Building a sewer in newly filled land on former tideflats in Seattle, 1910.

In areas where this is a concern, vacuum sewers may be used instead, due to the shallow excavation that is possible for them.

In many European countries, citizens are obliged to connect their home sanitation to the national sewerage where possible. This has resulted in large percentages of the population being connected. For example, the Netherlands have 99% of the population connected to the system, and 1% has an individual sewage disposal system or treatment system, e.g., septic tank. Others have slightly lower (although still substantial) percentages; e.g., 96% for Germany.