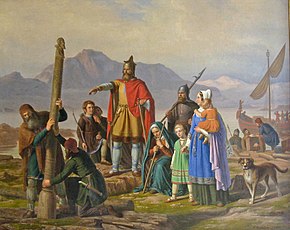 An (1850) depiction of the first medieval settlers arriving in Iceland

A settler is a person who has migrated to an area and established a permanent residence there, often to colonize the area. It is also used to describe people whose ancestors migrated to a new area, or who were born into an already established settler colony.

A settler who migrates to an area previously uninhabited or sparsely inhabited may be described as a pioneer.

Settlers are generally from a sedentary culture, as opposed to nomadic peoples who may move settlements seasonally, within traditional territories. Settlement usually relies on dispossession of already established populations within the contested area, and because of this it can be a very violent process.[1] Many times settlers are backed by governments or large countries.

One can witness how settlers very often occupied land previously residents to long-established peoples, designated as Indigenous (also called "natives", "Aborigines" or, in the Americas, "Indians").

The process by which Indigenous territories are settled by foreign peoples is usually called settler colonialism.[2] It relies upon a process of often violent dispossession.[3] Settler colonialism is an ongoing process which continues to structure the present lived experiences of Indigenous peoples in many parts of the world. As settler colonialism is ongoing, the word 'settler' is also used in the present - settlers are not simply the first physical arrivals to a place, but those who participate in the settlement of a territory that belongs to somebody else.[4]

In some cases (such as Australia), as colonialist mentalities and laws change, the legal ownership of some lands is contested by Indigenous people, who either claim or seek restoration of traditional usage, land rights, native title and related forms of legal ownership or partial control.

The word "settler" was not originally usually used in relation to a variety of peoples who became a part of settler societies, such as enslaved Africans (e.g. in the United States), indentured labourers (such as in Colonial America),[5] or convicts (such as in British America, c. 1615–1775; Australia 1788-1868).

In the figurative usage, a "person who goes first or does something first" also applies to the American English use of "pioneer" to refer to a settler—a person who has migrated to a less occupied area and established permanent residence there, often to colonize the area; as first recorded in English in 1605.[6] In United States history it refers to Europeans who were part of settling new lands on Indigenous territories. In Canada, the term 'settler' is currently used to describe people of non-Indigenous descent. It is not a personal or individual value judgment, but a description of a particular social position.[7]

In this usage, pioneers are usually among the first to an area, whereas settlers can arrive after first settlement and join others in the process of human settlement.[citation needed] This correlates with the work of military pioneers who were tasked with construction of camps before the main body of troops would arrive at the designated campsite. 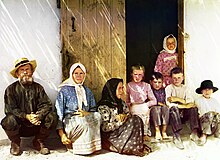 A family of Russian settlers in the Caucasus region, circa 1910

Although they are often thought of as traveling by sea—the dominant form of travel in the early modern era—significant waves of settlement could also use long overland routes, such as the Great Trek by the Boer-Afrikaners in South Africa, or the Oregon Trail in the United States.

Anthropologists record tribal displacement of native settlers who drive another tribe from the lands it held, such as the settlement of lands in the area now called Carmel-by-the-Sea, California where Ohlone peoples settled in areas previously inhabited by the Esselen tribe (Bainbridge, 1977).[9]

In the Middle East, there are a number of references to various squatter and specific policies referred as "settler". Among those:[citation needed]

Women and children experience violence in these highly dangerous areas because of the conflict. Many natives face displacement when new settlements are established. During 1948 Palestine war, in which Israel was created, over 750,000 Palestinians were displaced from their homes and not allowed to return.[11]

Settlements can prevent native people from continuing their work. For example, if the settlers take part of the land which the olive trees grow on then the natives no longer have access to those olive trees and their livelihood is compromised.[11]

The reasons for the emigration of settlers vary, but often they include the following factors and incentives: the desire to start a new and better life in a foreign land, personal financial hardship, social, cultural, ethnic, or religious persecution (e.g., the Pilgrims and Mormons), penal deportation (e.g. of convicted criminals from England to Australia) political oppression, and government incentive policies aimed at encouraging foreign settlement.[citation needed]

The colony concerned is sometimes controlled by the government of a settler's home country, and emigration is sometimes approved by an imperial government.[citation needed]