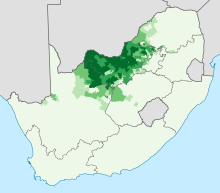 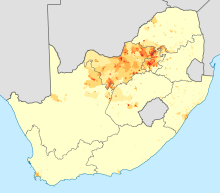 Setswana is an official language and lingua franca of Botswana and South Africa. Tswana-speakers are found in the north-west of South Africa, where four million people speak the language. An urbanised variety, which is part slang and not the formal Setswana, known as Pretoria Sotho, is the principal unique language of city of Pretoria. Which is a mixture of all Sotho languages. The three South African provinces with the most speakers are Gauteng (circa 11%), Northern Cape, and North West (over 70%). Until 1994, South African Tswana people were notionally citizens of Bophuthatswana, one of the bantustans of the apartheid regime. The Setswana language in the Northwest Province has variations in which it is spoken according to the tribes found in the Tswana culture (Bakgatla, Barolong, Bakwena, Batlhaping, Bahurutshe, Bafokeng, Batlokwa, Bataung, Bakgatla, Bapo, to name a few); the written language remains the same. A small number of speakers are also found in Zimbabwe (unknown number) and Namibia (about 10,000 people).[1]

The first European to describe the language was the German traveller Hinrich Lichtenstein, who lived among the Tswana people Batlhaping in 1806 although his work was not published until 1930. He mistakenly regarded Tswana as a dialect of the Xhosa, and the name that he used for the language "Beetjuana" may also have covered the Northern and Southern Sotho languages.

The first major work on Tswana was carried out by the British missionary Robert Moffat, who had also lived among the Batlhaping, and published Bechuana Spelling Book and A Bechuana Catechism in 1826. In the following years, he published several other books of the Bible, and in 1857, he was able to publish a complete translation of the Bible[citation needed].[5]

Solomon Plaatje, a South African intellectual and linguist, was one of the first writers to extensively write in and about the Tswana language.[5]

The vowel inventory of Tswana can be seen below.[7]

Some dialects have two additional vowels, the close-mid vowels /e/ and /o/.[8]

The consonant inventory of Tswana can be seen below.[9]

There are some minor dialectal variations among the consonants between speakers of Tswana. For instance, /χ/ is realised as either /x/ or /h/ by many speakers; /f/ is realised as /h/ in most dialects; and /tɬ/ and /tɬʰ/ are realised as /t/ and /tʰ/ in northern dialects.[12]

Stress is fixed in Tswana and thus always falls on the penult of a word, although some compounds may receive a secondary stress in the first part of the word. The syllable on which the stress falls is lengthened. Thus, mosadi (woman) is realised as [mʊ̀ˈsáːdì].[13]

Tswana has two tones, high and low, but the latter has a much wider distribution in words than the former. Tones are not marked orthographically, which may lead to ambiguity.[14]

An important feature of the tones is the so-called spreading of the high tone. If a syllable bears a high tone, the following two syllables will have high tones unless they are at the end of the word.[15]

Nouns in Tswana are grouped into nine noun classes and one subclass, each having different prefixes. The nine classes and their respective prefixes can be seen below, along with a short note regarding the common characteristics of most nouns within their respective classes.[16]

Some nouns may be found in several classes. For instance, many class 1 nouns are also found in class 1a, class 3, class 4, and class 5.[17]