Tertiary sector of the economy 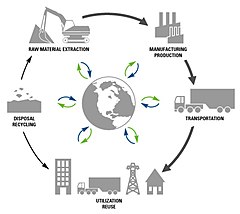 The service sector is the third of the three economic sectors of the three-sector theory. The others are the secondary sector (approximately the same as manufacturing), and the primary sector (raw materials).

The service sector consists of the production of services instead of end products. Services (also known as "intangible goods") include attention, advice, access, experience, and affective labor. The production of information has been long regarded as a service, but some economists now attribute it to a fourth sector, the quaternary sector.

The tertiary sector of industry involves the provision of services to other businesses as well as final consumers. Services may involve the transport, distribution and sale of goods from producer to a consumer, as may happen in wholesaling and retailing, pest control or entertainment. The goods may be transformed in the process of providing the service, as happens in the restaurant industry. However, the focus is on people by interacting with people and serving the customer rather than transforming the physical goods

It is sometimes hard to define whether a given company is part and parcel of the secondary or tertiary sector. And it is not only companies that have been classified as part of that sector in some schemes; government and its services such as police or military, and non-profit organizations such as charities and research associations can also be seen as part of that sector.[1]

For the last 100 years, there has been a substantial shift from the primary and secondary sectors to the tertiary sector in industrialized countries. This shift is called tertiarisation.[2] The tertiary sector is now the largest sector of the economy in the Western world, and is also the fastest-growing sector. In examining the growth of the service sector in the early Nineties, the globalist Kenichi Ohmae noted that:

"In the United States 70 percent of the workforce works in the service sector; in Japan, 60 percent, and in Taiwan, 50 percent. These are not necessarily busboys and live-in maids. Many of them are in the professional category. They are earning as much as manufacturing workers, and often more.”[3]

Economies tend to follow a developmental progression that takes them from a heavy reliance on agriculture and mining, toward the development of manufacturing (e.g. automobiles, textiles, shipbuilding, steel) and finally toward a more service-based structure. The first economy to follow this path in the modern world was the United Kingdom. The speed at which other economies have made the transition to service-based (or "post-industrial") economies has increased over time.

Historically, manufacturing tended to be more open to international trade and competition than services. However, with dramatic cost reduction and speed and reliability improvements in the transportation of people and the communication of information, the service sector now includes some of the most intensive international competition, despite residual protectionism. 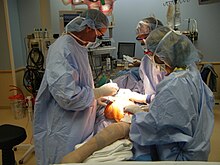 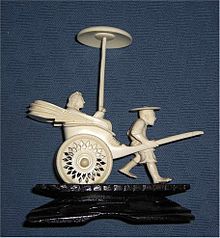 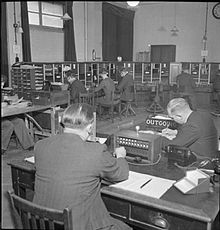 Testing telephone lines in London in 1945.

Service providers face obstacles selling services that goods-sellers rarely face. Services are intangible, making it difficult for potential customers to understand what they will receive and what value it will hold for them. Indeed, some, such as consultants and providers of investment services, offer no guarantees of the value for price paid.

Since the quality of most services depends largely on the quality of the individuals providing the services, "people costs" are usually a high fraction of service costs. Whereas a manufacturer may use technology, simplification, and other techniques to lower the cost of goods sold, the service provider often faces an unrelenting pattern of increasing costs.

Product differentiation is often difficult. For example, how does one choose one investment adviser over another, since they are often seen to provide identical services? Charging a premium for services is usually an option only for the most established firms, who charge extra based upon brand recognition.[4][self-published source?]

Examples of tertiary industries may include:

Below is a list of countries by service output at market exchange rates in 2016: