listen), French for "Seven Islands") is a city in the Côte-Nord region of eastern Quebec, Canada. It is among the northernmost locales with a paved connection to the rest of Quebec's road network. The population was 25,686 as of the Canada 2011 Census. The town is called Uashau, meaning "bay," in the Innu language.[6]

The only settlements on the paved road network that are farther north are Fermont, Radisson and Chisasibi, the latter two of which are in the extreme western part of the province at the north end of the James Bay Road. The only other settlements at higher latitudes in the province are mostly isolated Cree, Innu, or Inuit villages, with access limited to seasonal gravel roads.

Sept-Îles is the seat of the judicial district of Mingan.[8] The city is also home to the most highly attended recreational sport events in the province: the Tournoi Orange volleyball tournament, which consists of 405 teams and close to 800 volleyball games.[9]

The first inhabitants of the area were varying cultures of indigenous peoples. The historic Montagnais or Innu people, who called it Uashat ("Great Bay"), lived there at the time of European encounter. Jacques Cartier sailed by the islands in 1535 and made the first written record of them, calling them the Ysles Rondes ("Round Islands"). He was not the first European in the area, as he encountered Basque fishermen who came annually from Europe for whaling and cod fishing.

Early European economic activity in Sept-Îles was based on fishing and the fur trade. Louis Joliet established trading posts by 1679. Great Britain took over Canada from France in 1763 after its victory in the Seven Years' War. In 1842 the Hudson's Bay Company founded another post at this location. The village was incorporated into a municipality in 1885.

Lacking road access at the time, the town got its first pier in 1908. The City of Sept-Îles was incorporated in 1951, on the 300th anniversary of the first Catholic Mass held in the village.

The modern Sept-Îles was built rapidly during the construction of the Quebec North Shore and Labrador Railway, the 357-mile (575 km) railway link to the northern town of Schefferville. The railway was built between 1950 and 1954 by the Iron Ore Company of Canada. Iron ore mined near Schefferville and Wabush, Labrador, was transported on this railway and shipped from the Port of Sept-Îles. Shipment of the important new commodity resulted in investments that turned this into a major port.[10] 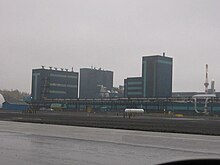 With the iron ore business, the Sept-Îles deep-water seaport was second in Canada only to Vancouver in terms of yearly tonnage. The huge engineering project led to a major increase in population, and housing was quickly built to accommodate them. The town grew from 2,000 inhabitants in 1951 to 14,000 in 1961, and 31,000 in 1981. The decline in worldwide iron ore prices in recent decades has since caused employment and population to decrease.

The Sept-Îles Airport has connections all over Quebec and Labrador. General aviation seaplanes are served by Sept-Îles/Lac Rapides Water Aerodrome. Air Gaspé was based in Sept-Îles, but acquired by Quebecair in 1973. In the 1980s, continued airline restructuring led to Quebecair's being acquired by CP Air in 1986, which in turn was taken over by Canadian Airlines in 1987.

Located on the north shore of the Saint Lawrence River, between the Sainte-Marguerite and Moisie rivers, Sept-Îles lies on the shore of a deep-water bay fronted by a seven-island archipelago, about 230 kilometres east of Baie-Comeau. The bay constitutes a 45 km² natural harbour.

The seven islands are named:

The archipelago is under provincial jurisdiction, with some parts administered by the federal government or by individuals.

There are two First Nations reserves in the area: Uashat in the western city proper, and Maliotenam in the east near the Moisie River.

Sept-Îles has a subarctic climate (Köppen climate classification Dfc) bordering on a humid continental climate (Dfb) despite being located at around only 50 degrees latitude. The two main seasons are summer and winter, as spring and autumn are very short transition seasons lasting only a few weeks. Winters are long, cold, and snowy, lasting from late October to late April, but milder than more inland locations, with a January high of −9.8 °C (14.4 °F) and a January low of −20.9 °C (−5.6 °F). Overall precipitation is unusually high for a subarctic climate, and snow totals correspondingly heavy, averaging 385 centimetres (152 in) per season with an average maximum depth of 0.5 metres (1.6 ft). Summers are mild, with a July high of 19.6 °C (67.3 °F); summers thus display stronger maritime influence than do winters. Precipitation is significant year-round, but it is lowest from January to March.

All terrestrial television stations in the Sept-Îles area are repeaters of stations and networks that originate elsewhere. These stations are available on the Cogeco cable system, which also offer a local cable channel, TVCogeco. The local Cogeco system also carries CBMT-DT (CBC) Montreal and CJBR-DT (Ici Radio-Canada Télé) Rimouski.

Sept-Îles is not designated as a mandatory market for digital television conversion; only CFTF-TV and Télé-Québec announced their intentions to convert all their transmitters to digital, regardless of location.

Iron ore concentrate from IOC activities in Labrador City are transported by the Quebec North Shore and Labrador Railway and are shipped to many markets around the world from Sept-Îles port facilities. Iron ore from Wabush and Bloom Lake is also shipped at Point Noire port facilities. The Aluminerie Alouette, in activity since 1992 has a large part in the local employment since his construction started in 1989. Since its major expansion that started in 2005, it is now the largest primary aluminum smelter in the Americas. As a service centre for northeastern Québec, Sept-Îles economy is also powered by many jobs in the services sector.

Prior to its disestablishment, Air Gaspé was headquartered in Sept-Îles.[23]