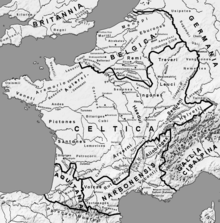 A map of Gaul in the 1st century BC, showing the relative positions of the Celtic tribes.

The Senones or Senonii (Gaulish: "the ancient ones"; Ancient Greek: Σήνωνες) were an ancient Gallic tribe that dwelled in the Seine basin, around present-day Sens, in Caesar's time.

Part of the Senones settled in the Italian peninsula, where they ousted the Umbrians between Ariminum (modern-day Rimini) and Ancona. They are described in classical sources as the leaders of the Gallic war-band that captured Rome during the Battle of the Allia in 390 BCE. They remained a constant threat until Rome eventually subjugated them in 283 BCE, after which they disappeared from Italy.[1]

The city of Sens, attested as Senonas oppidum in the 4th century CE ('oppidum of the Senones'), is named after the Gallic tribe.[10][11]

The Senones of Gauls dwelled around their capital Agedincum (present-day Sens).[10]

In 400 BCE, they crossed the Alps and, driving out the Umbrians, settled on the east coast of Italy. Their territory spanned from Forlì to Ancona and Terni, in the Ager Gallicus. They founded the town of Sena Gallica (Senigallia), which became their capital. In 391 BCE, under the chieftain Brennus, they invaded Etruria and besieged Clusium. The Clusines appealed to Rome for aid. The Romans provided support, which constituted a violation of the law of nations. The ensuing war resulted in the defeat of the Romans at the Battle of the Allia (18 July 390 BCE) and the sacking of Rome.[14]

For more than 100 years the Senones were engaged in hostilities with the Romans, until they were finally subdued (283 BCE) by P. Cornelius Dolabella and driven out of their territory. Nothing more was heard of them in Italy. It is possible that they joined with Gallic tribes who spread themselves throughout the lands of the Danube, Macedonia, and Asia Minor. A Roman colony was established at Sena, called Sena Gallica (currently Senigallia) to distinguish it from Sena Julia (Siena) in Etruria.[14]

A branch of the Senones (or a different tribe of the same name) settling the district which now includes the departments of Seine-et-Marne, Loiret and Yonne from 53–51 BCE were engaged in hostilities with Julius Caesar brought about by their expulsion of Cavarinus, whom he had appointed their king. In 51 BCE, a Senonian named Drappes threatened the Provincia, but was captured and starved himself to death. From this time the Gallic Senones disappear from history. In later times, they were included in Gallia Lugdunensis. Their chief towns were Agedincum (later Senones, whence Sens), Metiosedum [fr] (Melun; according to A. Holder, Meudon), and Vellaunodunum (site uncertain).[14]