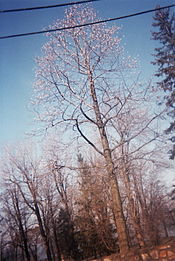 Non-native plant species of borderline hardiness, such as this tuliptree, thrive in Senneville's most favoured microclimate near Lac des Deux Montagnes

Senneville (French pronunciation: ​[sɛnvil]) is an affluent on-island suburban village on the western tip of the Island of Montreal. It is the wealthiest town in the West Island.[5]

Situated close to the city of Montreal, it was historically a popular location for the country houses of wealthy Montrealers.[6] Attractions include multiple golf clubs, a yacht club, and La Ferme du Fort Senneville,[7] an organic demonstration farm.[8] The Morgan Arboretum was founded here in 1953, and is today managed by Macdonald College; an important bird sanctuary, it is open to the public year-round.[9] Fort Senneville was constructed here in 1671, but its ruins are on private land and are not accessible to the public. The historic core of the village was designated a National Historic Site of Canada in 2002.[10]

On January 1, 2002, as part of the 2002–2006 municipal reorganization of Montreal, Senneville was merged into the city of Montreal and became part of the borough of Pierrefonds-Senneville. However, after a change of government and a 2004 referendum, it was re-constituted as an independent village municipality on January 1, 2006.

All of Senneville lies over dolomite. In contrast to the monotony of this bedrock, there are many types of soil in the municipality. Clay is common near the northeastern corner and part of the western shores. Sand dominates many inland areas; it is rapidly drained in places but often has impeded drainage due to the type of hardpan which develops in podzols. Near-shore areas along the northern margin have extensive areas of glacial till which forms a calcareous well-drained loam.

The loamy slopes overlooking Lac des Deux Montagnes are excellent for fruit trees and tender plants due to fertile soils, good drainage, and the moderating effect on microclimate provided by the lake.

Meaning “Born under the lily [of France], flourishes under the maple [of Canada]”, this phrase captures the history of Senneville.[11]

The current mayor of the Village of Senneville is Julie Brisebois.[12]

In addition, there are six municipal councillors:

There were 360 households, out of which 34.7% had children living with them, 70.8% were married couples living together, 0.0% had a female lone-parent as a householder, and 18.1% of all households were made up of individuals. The average married-couple family size was 3.0.

The Lester B. Pearson School Board (LBPSB) operates Anglophone public schools in the area.

Notable past and present residents include: