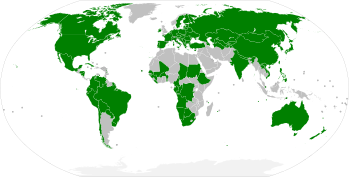 Secularity can occur in degrees and can be hard to define, but as a minimum, secular states do not have a state religion. Countries with a state religion are shown in grey on the map. Those without are coloured.

A secular state is an idea pertaining to secularity, whereby a state is or purports to be officially neutral in matters of religion, supporting neither religion nor irreligion.[1] A secular state claims to treat all its citizens equally regardless of religion, and claims to avoid preferential treatment for a citizen based on their religious beliefs, affiliation or lack of either over those with other profiles.

Secular states do not have a state religion (e.g., an established religion) or an equivalent, although the absence of an established state religion does not necessarily imply that a state is fully secular or egalitarian in all respects. For example, some states that describe themselves as secular have religious references in their national anthems and flags, or laws which advantage one religion or another.

Secularity can be established at a state's creation (e.g., the Soviet Union, the United States of America) or by it later secularizing (e.g., France or Nepal). Movements for laïcité in France and separation of church and state in the United States have defined modern concepts of secularism, the United States of America being the first explicitly secular nation both in Western and world history.[2] Historically, the process of secularizing typically involves granting religious freedom, de-establishing state religions, stopping public funds being used for a religion, freeing the legal system from religious control, freeing up the education system, tolerating citizens who change religion or abstain from religion, and allowing political leadership to come to power regardless of their religious beliefs.[3]

In France, Italy and Spain, for example, official holidays for the public administration tend to be Christian feast days. Any private school in France that contracts with Education Nationale means its teachers are salaried by the state—most of the Catholic schools are in this situation and, because of history, they are the majority; however, any other religious or non-religious schools also contract this way.[4] In some European states where secularism confronts monoculturalist philanthropy, some of the main Christian sects and sects of other religions depend on the state for some of the financial resources for their religious charities.[5] It is common in corporate law and charity law to prohibit organized religion from using those funds to organize religious worship in a separate place of worship or for conversion; the religious body itself must provide the religious content, educated clergy and laypersons to exercise its own functions and may choose to devote part of their time to the separate charities. To that effect some of those charities establish secular organizations that manage part of or all of the donations from the main religious bodies.

Religious and non-religious organizations can apply for equivalent funding from the government and receive subsidies based on either assessed social results[clarification needed] where there is indirect religious state funding, or simply the number of beneficiaries of those organisations.[6] This resembles charitable choice in the United States. It is doubtful whether overt direct state funding of religions is in accordance with the European Convention on Human Rights. Apparently this issue has not yet been decided at supranational level in ECtHR case law stemming from the rights in the International Covenant on Civil and Political Rights, which mandates non-discrimination in affording its co-listed basic social rights.[clarification needed][gobbledegook] Specifically, funding certain services would not accord with non-discriminatory state action.[7]

Many states that are nowadays secular in practice may have legal vestiges of an earlier established religion. Secularism also has various guises that may coincide with some degree of official religiosity. In the United Kingdom, the head of state is still required to take the Coronation Oath enacted in 1688, swearing to maintain the Protestant Reformed religion and to preserve the established Church of England.[8] The UK also maintains seats in the House of Lords for 26 senior clergymen of the Church of England, known as the Lords Spiritual.[9] In Canada the Charter of Rights and Freedoms affords secular freedoms of conscience and religion, thought, belief, opinion and expression, including communication, assembly and association yet the Charter's preamble maintains the concept of "the supremacy of God" which would appear to disadvantage those who hold nontheistic or polytheistic beliefs, including atheism and Buddhism.[10] [11] Italy has been a secular state since 1985 but still recognizes a special status for the Catholic Church. The reverse progression can also occur, however; a state can go from being secular to being a religious state, as in the case of Iran where the secularized Imperial State of Iran was replaced by an Islamic Republic (list below). Nonetheless, the last 250 years has seen a trend towards secularism.[12][13][14]