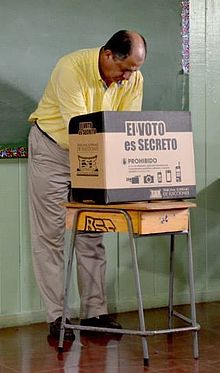 The secret ballot, also known as the Australian ballot or Massachusetts ballot,[1] is a voting method in which a voter's choices in an election or a referendum are anonymous. This forestalls attempts to influence the voter by intimidation, blackmailing, and potential vote buying. This system is one means of achieving the goal of political privacy.

Secret ballots are used in conjunction with various voting systems. The most basic form of a secret ballot utilizes blank pieces of paper upon which each voter writes his or her choice. Without revealing the votes to anyone, the voter folds the ballot paper in half and place it in a sealed box. This box is later emptied for counting. An aspect of secret voting is the provision of a voting booth to enable the voter to write on the ballot paper without others being able to see what is being written. Today, printed ballot papers are usually provided, with the names of the candidates or questions and respective check boxes. Provisions are made at the polling place for the voters to record their preferences in secret, and the ballots are designed to eliminate bias and to prevent anyone from linking voter to ballot.

A privacy problem arises with moves to improve efficiency of voting by the introduction of postal voting and electronic voting. Some countries permit proxy voting but some people argue that this is inconsistent with voting privacy.

In ancient Greece, secret ballots were used in several situations[2] like ostracism and also to remain hidden from people seeking favors.

In ancient Rome, the laws regulating elections were collectively known as Tabellariae Leges, the first of which was introduced in 139 BC (lex Gabinia tabellaria).[3]

Today, the practice of casting secret ballots is commonplace. Many voters would not consider that any other method might be used, however other methods which had been used and which are still used in some places and contexts include "oral votes", as well as open ballot systems which involve the public display of votes or roll calls. Other public voting methods include raising a hand to indicate a vote or using coloured marbles or cards to indicate a voting choice.

Article 31 of the Constitution of the Year III of the Revolution (1795)[4] states that "All elections are to be held by secret ballot". The same goes with the constitution of 1848:[5] voters could hand-write the name of their preferred candidate on their ballot at home (the only condition was to write on white paper[6]) or receive one distributed on the street.[7] The ballot was folded in order to prevent other people from reading its contents.[7]

Louis-Napoléon Bonaparte attempted to abolish the secret ballot for the 1851 plebiscite with an electoral decree requesting electors to write down "yes" or "no" (in French: "oui" or "non") under the eyes of everyone. But he faced strong opposition and finally changed his mind, allowing the secret ballot to take place.[8]

According to the official web site of the Assemblée nationale (the lower house of the French parliament), the voting booth was permanently adopted only in 1913.[9]

The Polling by William Hogarth (1755). Before the secret ballot was introduced, voter intimidation was commonplace.

The London School Board election of 1870 was the first large-scale election by secret ballot in Britain.

After several failed attempts (several of them spearheaded by George Grote[11]), the secret ballot was eventually extended generally in the Ballot Act 1872, substantially reducing the cost of campaigning (as treating was no longer realistically possible) and was first used on 15 August 1872 to re-elect Hugh Childers as MP for Pontefract in a ministerial by-election following his appointment as Chancellor of the Duchy of Lancaster. The original ballot box, sealed in wax with a licorice stamp, is held at Pontefract museum.[12]

However, the UK uses numbered ballots in order to allow courts to intervene, under rare circumstances, to identify which candidate voters voted for.

In Australia, secret balloting appears to have been first implemented in Tasmania on 7 February 1856.

Until the original Tasmanian Electoral Act 1856 was "re-discovered" recently, credit for the first implementation of the secret ballot often went to Victoria, where it was pioneered by the former mayor of Melbourne, William Nicholson,[13] and simultaneously South Australia.[14] Victoria enacted legislation for secret ballots on 19 March 1856,[15] and South Australian Electoral Commissioner William Boothby generally gets credit for creating the system finally enacted into law in South Australia on 2 April of that same year (a fortnight later). The other Australian colonies followed: New South Wales (1858), Queensland (1859), and Western Australia (1877). New Zealand implemented secret voting in 1870.

State electoral laws, including the secret ballot, applied for the first election of the Australian Parliament in 1901, and the system has continued to be a feature of federal elections and referenda. The Commonwealth Electoral Act 1918 does not explicitly set out the secret ballot but a reading of sections 206, 207, 325, 327 of the Act would imply its assumption. Sections 323 and 226(4) do however, apply the principle of a secret ballot to polling staff and would also support the assumption.

Before 1890, partisan newspapers printed filled-out ballots which party workers distributed on election day so voters could drop them directly into the boxes. All of the states replaced these with secret ballots around 1890, popularly called "Australian ballots." They were printed by the local government and listed all the candidates impartially.[16]

The "Australian ballot" is defined as having four parts:[17]

In the United States, most states had moved to secret ballots soon after the presidential election of 1884. Kentucky was the last state to do so in 1891, when it quit using an oral ballot. But seven states did not have government-printed ballots until the 20th century. South Carolina created them in 1950 and Georgia in 1922.[18]

The first city to start using the Australian ballot in the United States was Louisville, Kentucky. They used a ballot drafted by Lewis Naphtali Dembitz, the uncle of and inspiration for future Supreme Court associate justice Louis Brandeis. The first state to adopt the Australian ballot was Massachusetts. For this reason it is also known as the "Massachusetts ballot". In the U.S., voting by secret ballot was universal by 1892 but criminal prohibitions against paying people to vote were only instituted in 1925.[19]

Elections in the United States are mostly held by secret ballot,[20] although some states use mail ballots instead, which violate requirements 3 and 4 of the "Australian ballot", as it is distributed to the home, and potentially marked in the presence of other people. The states of Colorado, Oregon, and Washington conduct all elections by mailed ballots.[21] The Constitution for the state of West Virginia still allows voters to cast "open ballots".[22]

The right to hold elections by secret ballot is included in numerous treaties and international agreements that obligate their signatory states: 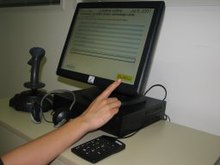 ISG TopVoter, a voting machine which assures secret ballot for voters with disabilities.

Ballot design and polling place architecture often denies the disabled the possibility to cast a vote in secret. In many democracies disabled persons may vote by appointing another person who is allowed to join them in the voting booth and fill the ballot in their name.[27] This does not assure secrecy of the ballot.

The United Nations Convention on the Rights of Persons with Disabilities which entered into force in 2008 assures secret ballot for disabled voters. Article 29 of the Convention requires that all Contracting States protect "the right of the person with disabilities to vote by secret ballot in elections and public referendums". According to this provision, each Contracting State should provide for voting equipment which would enable disabled voters to vote independently and secretly. Some democracies, e.g. the United States, the Netherlands, Slovenia, Albania or India allow disabled voters to use electronic voting machines. In others, among them Azerbaijan, Canada, Ghana, the United Kingdom, and most African and Asian countries, visually impaired voters can use ballots in Braille or paper ballot templates. Article 29 also requires that Contracting States ensure "that voting procedures, facilities and materials are appropriate, accessible and easy to understand and use." In some democracies, e.g. United Kingdom, Sweden and the United States, all the polling places already are fully accessible for disabled voters.

The United Kingdom secret ballot arrangements are sometimes criticised because it is possible to link a ballot paper to the voter who cast it. Each ballot paper is individually numbered and each elector also has a number. When an elector is given a ballot paper, their number is noted down on the counterfoil of the ballot paper (which also carries the ballot paper number). This means, of course, that the secrecy of the ballot is not guaranteed, if anyone can gain access to the counterfoils, which are locked away securely before the ballot boxes are opened at the count. Polling station officials colluding with election scrutineers may therefore determine how individual electors have voted.

This measure is thought to be justified as a security arrangement so that if there was an allegation of fraud, false ballot papers could be identified. The process of matching ballot papers to voters is formally permissible only if an Election Court requires it; in fact the Election Court has rarely made such an order since the secret ballot was introduced in 1872. One example was in a close local election contest in Richmond-upon-Thames in the late 1970s with three disputed ballots and a declared majority of two votes. Reportedly prisoners in a UK prison were observed identifying voters' ballot votes on a list in 2008.[28] The legal authority for this system is set out in the Parliamentary Elections Rules in Schedule 1 of the Representation of the People Act 1983.[29]

In the United States, most states guarantee a secret ballot. But some states, including Indiana and North Carolina, require the ability to link some ballots to voters. This may for example be used with absentee voting to retain the ability to cancel a vote if the voter dies before election day.[30][31] Sometimes the number on the ballot is printed on a perforated stub which is torn off and placed on a ring (like a shower curtain ring) before the ballot is cast into the ballot box. The stubs prove that an elector has voted and ensure that they can only vote once, but the ballots themselves are both secret and anonymous. At the end of voting day, the number of ballots inside the box should match the number of stubs on the ring, certifying that every ballot was cast by a registered elector, and that none of them were lost or fabricated. Sometimes the ballots themselves are numbered, making the vote trackable. In 2012 in Colorado, this procedure was ruled legal by Federal District Judge Christine Arguello, who determined that the U.S. Constitution does not grant a right to a secret ballot.[32]

Some people believe that the secret ballot enables election fraud and so should be eliminated[33] or supplemented with other ways of verifying voting, such as cryptographically secure receipts.[34][35]