The Second Franco-Dahomean War, which raged from 1892 to 1894, was a major conflict between the French Third Republic, led by General Alfred-Amédée Dodds, and the Kingdom of Dahomey under King Béhanzin. The French emerged triumphant and incorporated Dahomey into their growing colonial territory of French West Africa.

In 1890, the Fon kingdom of Dahomey and the French Third Republic had gone to war in what was remembered as the First Franco-Dahomean War over the former's rights to certain territories, specifically those in the Ouémé Valley.[1] The Fon ceased hostilities with the French after two military defeats, withdrawing their forces and signing a treaty conceding to all of France's demands.[2] However, Dahomey remained a potent force in the area and quickly re-armed with modern weapons in anticipation of a second, decisive conflict. 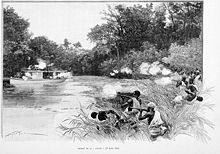 After re-arming and regrouping, the Fon returned to raiding the Ouémé Valley,[3] the same valley fought over in the first war with France. Victor Ballot, the French Resident at Porto-Novo, was sent via gunboat upriver to investigate.[4] His ship was attacked and forced to depart with five men wounded in the incident.[4] King Benhanzin rejected complaints by the French, and war was declared immediately by the French.[4]

The French entrusted the war effort against Dahomey to Alfred-Amédée Dodds, an octoroon colonel of the Troupes de marine from Senegal.[4] Colonel Dodds arrived with a force of 2,164 men including Foreign Legionnaires, marines, engineers, artillery and Senegalese cavalry known as spahis plus the trusted tirailleurs.[4] These forces were armed with the new Lebel rifles, which would prove decisive in the coming battle.[5] The French protectorate kingdom of Porto-Novo also added some 2,600 porters to aid in the fight.[6]

The Fon, prior to the outbreak of the second war, had stockpiled between 4,000 and 6,000 rifles including Mannlicher and Winchester carbines.[7] These were purchased from German merchants via the port of Whydah.[7] King Béhanzin also bought some machine-guns and Krupp cannons, but it is unknown (and unlikely) that these were ever put to use.[7]

On the 15 June 1892, the French blockaded Dahomey's coast to prevent any further arms sales.[6] Then, on the 4 July the first shots of the war were fired from French gunboats with the shelling of several villages along the lower Ouémé Valley.[6] The carefully organized French army began moving inland in mid-August toward their final destination of the Dahomey capital of Abomey.[6]

The French invasion force assembled at the village of Dogba on the 14 September some 80 kilometres (50 mi) upriver on the border of Dahomey and Porto-Novo.[6] At around 5:00am on the 19 September the French force was attacked by the army of Dahomey.[6] The Fon broke off the attack after three to four hours of relentless fighting, characterized by repeated attempts by the Fon for melee combat.[8] Hundreds of Fon were left dead on the field with the French forces suffering only five dead.[8]

The French forces moved another 24 km (15 mi) upriver before turning west in the direction of Abomey.[5] On the 4 October the French column was attacked at Poguessa (also known as Pokissa or Kpokissa) by Fon forces under the command of King Béhanzin himself.[5] The Fon staged several fierce charges over two to three hours that all failed against the 20-inch bayonets of the French.[5] The Dahomey army left the field in defeat losing some 200 soldiers.[9] The French carried the day with only 42 casualties.[9] The Dahomey Amazons were also conspicuous in the battle. 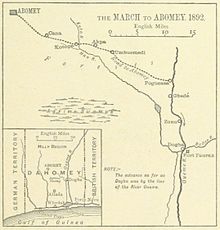 The French route to Abomey

After the defeat at Poguessa, the Fon resorted to guerilla tactics rather than set-piece engagements. It took the French invasion force a month to march the 40 km (25 mi) between Poguessa and the last major battle at Cana just outside Abomey.[9] The Fon fought from foxholes and trenches to slow the French invasion.[9]

On 6 October, the French had another major encounter with the Fon, at the village of Adégon.[10] The Fon fared badly again, losing 86 Dahomey Regulars and 417 Dahomey Amazons.[10] The French suffered six dead and 32 wounded.[10] The French bayonet charge inflicted the lion's share of Dahomey casualties.[10] The Battle was a turning point for Dahomey: the royal court lost hope.[10] The battle was also significant in that much of Dahomey's Amazon corps was lost.[10]

The French column was able to cross another 24 km (15 mi) toward Abomey after Adégon, bivouacking at the village of Akpa.[10] From the moment they arrived, they were attacked daily.[10] From the French arrival until 14 October, Dahomey's Amazons were conspicuously absent. Then, on 15 October, they reappeared an were present in nearly every subsequent engagement, inflicting significant losses, especially against officers.[10] Once resupplied, the French departed Akpa on 26 October, heading toward the village of Cotopa.[11] 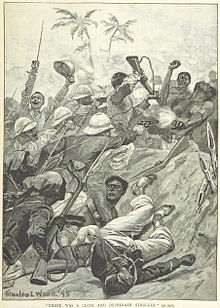 Hand-to-hand fighting at Cotopa (from a British book)

From the 26 to 27 October the French fought through the Dahomey forces at Cotopa and elsewhere, crossing lines of enemy trenches.[11] Bayonet charges were the deciding factor in nearly all engagements. The Fon penchant for hand-to-hand fighting left them at a disadvantage against French bayonets, which easily outreached Dahomey's swords and machetes.[11] The Amazons are reported by the French to have fought the hardest, charging out of their trenches but to no avail.[11]

From the 2 November until the 4 November the French and Fon armies fought on the outskirts of Cana.[11] By this time, Béhanzin's army numbered no more than 1,500 including slaves and pardoned convicts.[11] On the 3 November the king directed the attack on the French bivouac.[11] Amazons seemed to have made up much of the force. After four hours of desperate combat, the Fon army withdrew.[11] The fighting continued until the next day.

The last engagement at Cana, which took place at the village of Diokoué, site of a royal palace, was the last time Amazons were used.[12] Special units of the Amazons were assigned specifically to target French officers.[12] After a full day of fighting, the French overran the Dahomey army with another bayonet charge.[12]

End of the war 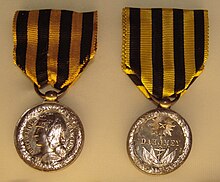 On the 5 November Dahomey sent a truce mission to the French, and the next day saw the French enter Cana.[12] The peace mission failed, however, and on the 16 November, the French army marched on Abomey.[12] King Béhanzin, refusing to let the capital fall into enemy hands, burned and evacuated the city.[12] He and the remnants of the Dahomey army fled north as the French entered the capital on the 17 November.[12] The French tricolor was hoisted over the Singboji palace, which survived the fire and remains in modern Benin to this day.[13]

The king of Dahomey fled to Atcheribé, 48 km (30 mi) north of the capital.[13] Attempts were initiated to rebuild the army and its Amazon Corps until the French chose Béhanzin's brother, Goutchili, as the new king.[13] King Béhanzin surrendered to the French on the 15 January 1894 and was exiled to Martinique.[13] The war had officially ended.