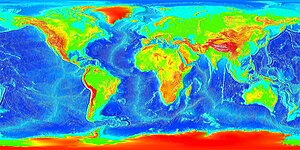 The seabed (also known as the seafloor, sea floor, or ocean floor) is the bottom of the ocean, no matter how deep. All floors of the ocean are known as 'seabeds'. 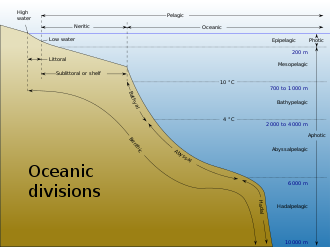 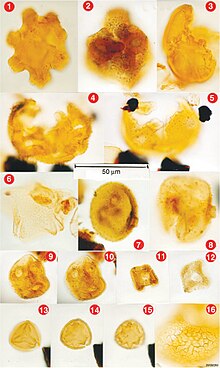 The mid-ocean ridge, as its name implies, is a mountainous rise through the middle of all the oceans, between the continents. Typically a rift runs along the edge of this ridge. Along tectonic plate edges there are typically oceanic trenches – deep valleys, created by the mantle circulation movement from the mid-ocean mountain ridge to the oceanic trench.

Hotspot volcanic island ridges are created by volcanic activity, erupting periodically, as the tectonic plates pass over a hotspot. In areas with volcanic activity and in the oceanic trenches there are hydrothermal vents – releasing high pressure and extremely hot water and chemicals into the typically freezing water around it.

Deep ocean water is divided into layers or zones, each with typical features of salinity, pressure, temperature and marine life, according to their depth. Lying along the top of the abyssal plain is the abyssal zone, whose lower boundary lies at about 6,000 m (20,000 ft). The hadal zone – which includes the oceanic trenches, lies between 6,000–11,000 metres (20,000–36,000 ft) and is the deepest oceanic zone.

Depth below seafloor is a vertical coordinate used in geology, paleontology, oceanography, and petrology (see ocean drilling). The acronym "mbsf" (meaning "meters below the seafloor") is a common convention used for depths below the seafloor.[1][2]

Sediments in the seabed vary diversely in their origin, from eroded land materials carried into the ocean by rivers or wind flow, waste and decompositions of sea animals, and precipitation of chemicals within the sea water itself, including some from outer space.[3] There are four basic types of sediment of the sea floor: 1.) "Terrigenous" describes the sediment derived from the materials eroded by rain, rivers, glaciers and that which is blown into the ocean by the wind, such as volcanic ash. 2.) Biogenous material is the sediment made up of the hard parts of sea animals that accumulate on the bottom of the ocean. 3.) Hydrogenous sediment is the dissolved material that precipitates in the ocean when oceanic conditions change, and 4.) cosmogenous sediment comes from extraterrestrial sources. These are the components that make up the seafloor under their genetic classifications.

Terrigenous sediment is the most abundant sediment found on the seafloor, followed by biogenous sediment. The sediment in areas of the ocean floor which is at least 30% biogenous materials is labeled as an ooze. There are two types of oozes: Calcareous oozes and Siliceous oozes. Plankton is the contributor of oozes. Calcareous oozes are predominantly composed of calcium shells found in phytoplankton such as coccolithophores and zooplankton like the foraminiferans. These calcareous oozes are never found deeper than about 4,000 to 5,000 meters because at further depths the calcium dissolves.[4] Similarly, Siliceous oozes are dominated by the siliceous shells of phytoplankton like diatoms and zooplankton such as radiolarians. Depending on the productivity of these planktonic organisms, the shell material that collects when these organisms die may build up at a rate anywhere from 1mm to 1 cm every 1000 years.[4]

Hydrogenous sediments are uncommon. They only occur with changes in oceanic conditions such as temperature and pressure. Rarer still are cosmogenous sediments. Hydrogenous sediments are formed from dissolved chemicals that precipitate from the ocean water, or along the mid-ocean ridges, they can form by metallic elements binding onto rocks that have water of more than 300 °C circulating around them. When these elements mix with the cold sea water they precipitate from the cooling water.[4] Known as manganese nodules, they are composed of layers of different metals like manganese, iron, nickel, cobalt, and copper, and they are always found on the surface of the ocean floor.[4] Cosmogenous sediments are the remains of space debris such as comets and asteroids, made up of silicates and various metals that have impacted the Earth.[5]

Another way that sediments are described is through their descriptive classification. These sediments vary in size, anywhere from 1/4096 of a mm to greater than 256 mm. The different types are: boulder, cobble, pebble, granule, sand, silt, and clay, each type becoming finer in grain. The grain size indicates the type of sediment and the environment in which it was created. Larger grains sink faster and can only be pushed by rapid flowing water (high energy environment) whereas small grains sink very slowly and can be suspended by slight water movement, accumulating in conditions where water is not moving so quickly.[6] This means that larger grains of sediment may come together in higher energy conditions and smaller grains in lower energy conditions.

Benthos is the community of organisms which live on, in, or near the seabed, the area known as the benthic zone.[7] This community lives in or near marine sedimentary environments, from tidal pools along the foreshore, out to the continental shelf, and then down to the abyssal depths. The benthic zone is the ecological region on, in and immediately above the seabed, including the sediment surface and some sub-surface layers. Benthos generally live in close relationship with the substrate bottom, and many such organisms are permanently attached to the bottom. The superficial layer of the soil lining the given body of water, the benthic boundary layer, is an integral part of the benthic zone, and greatly influences the biological activity which takes place there. Examples of contact soil layers include sand bottoms, rocky outcrops, coral, and bay mud.

Layers of the pelagic zone

Each area of the seabed has typical features such as common soil composition, typical topography, salinity of water layers above it, marine life, magnetic direction of rocks, and sedimentation.

Seabed topography is flat where sedimentation is heavy and covers the tectonic features. Sediments comes from various sources:

Where sedimentation is very light, such as in the Atlantic ocean, especially in the northern and eastern Atlantic, the original tectonic activity can be clearly seen as straight line "cracks" or "vents" thousands of kilometers long.[original research?]

Marine life is abundant in the deep sea, especially around hydrothermal vents. Large deep sea communities of marine life have been discovered around black and white smokers—vents emitting chemicals toxic to humans and most vertebrates. This marine life receives its energy both from the extreme temperature difference (typically a drop of 150 degrees) and from chemosynthesis by bacteria.

The seabed has been explored by submersibles such as Alvin and, to some extent, scuba divers with special equipment. The process that continually adds new material to the ocean floor is seafloor spreading and the continental slope. In recent years satellite images show a very clear mapping of the seabed, and are used extensively in the study and exploration of the ocean floor.

In art and culture

On and under the seabed are archaeological sites of historic interest, such as shipwrecks and sunken towns. This underwater cultural heritage is protected by the UNESCO Convention on the Protection of the Underwater Cultural Heritage. The convention aims at preventing looting and the destruction or loss of historic and cultural information by providing an international legal framework.[10]