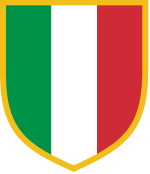 The scudetto (Italian for: "little shield") is a decoration worn by Italian sports clubs that won the annual championship of their respective sport in the previous season.

The scudetto was created in the 1920s to honour the winner of the national association football league (in 1929 rebranded as Serie A) and the first-ever team to wear it was Genoa C.F.C. in 1924.

Later, it was adopted by the teams of other sports. 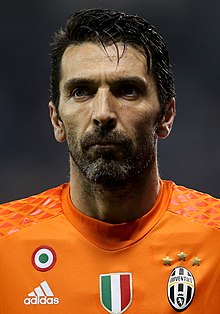 Gianluigi Buffon in 2016, wearing the scudetto won with Juventus F.C. the season prior. Also present in the image is the Coccarda, worn by the current holders of the Coppa Italia

Sources generally agree that the inventor of the scudetto was the Italian poet and playwright Gabriele D'Annunzio. In his youth, D'Annunzio was a keen follower of football and in 1887 he bought in London a leather ball from the same manufacturer that supplied the Football League[1] and would play football with his friends on the beach of his native Pescara.[1]

In 1920, the former Austro-Hungarian city of Fiume (now the Croatian Rijeka) was annexed to Italy, D'Annunzio proposed that the local football team acknowledge supporting the Italian sovereignty over the city with a tricolored shield on its jerseys of green, white and red.[1][2]

The Italian rugby union championship which started in 1928 adopted the scudetto on a team's jersey to indicate a title holding team.