Scorporo (Italian: [ˈskɔrporo], "parceling out") is a mixed-member electoral system (sometimes referred to as an additional member system) whereby a portion of members are elected in single-member districts (SMDs) and a portion are elected from a list. It may be fully defined as a parallel voting system which excludes a portion (up to 100%) of the SMD winners' votes in electing the proportional tier, to result in a more proportional outcome. The exclusion of a portion of the SMD winners' votes is what makes scorporo fundamentally different from parallel voting and somewhat closer to mixed member proportional representation, and thereby between the two in terms of proportionality. The system is only known to have been used in Italy and for a portion of the compensatory tier of the National Assembly of Hungary.

Scorporo was in force for elections to the bicameral Parliament of Italy based on Law 277/1993 from 1993 to 2005. Under this system, members could be elected in two ways:

The system was subject to the following specific rules for each chamber:

Abuse in the 2001 Italian Chamber of Deputies election

Symbols of the two liste civette 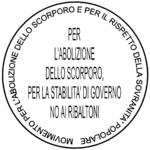 In the 2001 Italian general election, one of the two main coalitions (the House of Freedoms, which opposed the Scorporo system), linked many of their constituency candidates to a decoy list (liste civetta) for the proportional component, under the name Abolizione Scorporo (Abolish Scorporo). This list was not designed to win proportional seats, but only to soak up constituency votes for House of Freedoms, enabling them to win a larger share of the proportional list seats than they would be entitled to if all candidates were linked other House of Freedoms parties. This intentionally undermined the compensatory nature of the electoral system. As a defensive move, the other coalition, The Olive Tree, created their own decoy list under the name Paese Nuovo (New Country).

The decoy lists were extremely successful. Between them, candidates linked to the decoy lists won 360 of the 475 constituency seats, more than half of the total of 630 seats in the Chamber of Deputies. Meanwhile, the decoy lists won a combined total of less than 0.2% of the proportional part of the vote. For the two main coalitions, their vote totals in the proportional component were essentially unaffected by the constituency votes, enabling them to win far more proportional seats than the system was designed for. In the case of Forza Italia (a party within House of Freedoms), the tactic was so successful that it did not have enough candidates in the proportional component, and its list exhausted before it could be awarded all the seats it had won, ultimately missing out on 12 additional seats.

This was facilitated by the fact that this particular scorporo system allowed the single-member constituency vote and the proportional list vote not to be linked. Decoy lists are a common issue in all compensatory and pseudo-compensatory systems, and this was not a unique problem for scorporo.

Due to Silvio Berlusconi's opposition to the system, Italy reverted to list semi-proportional representation in 2005.[clarification needed][citation needed]

The compensatory tier of the National Assembly of Hungary (which follows a type of parallel voting with an additional compensatory systems) is allocated to parties crossing a national 5% threshold based on losing candidates' votes in the first round of single district voting. However, each party's totals are further augmented by "any wasted" votes from the regional list-tier elections (see below).

Several systems using regional list proportional representation contain a compensatory element similar to scorporo for wasted votes at the district or regional level. Because list PR systems may have more than one candidate elected in a district, typically these systems use "wasted votes" rather than the votes of losing candidates.

Countries that make use of such tiers are: