Saudia (Arabic: السعودية‎ as-Suʿūdiyyah), also known as Saudi Arabian Airlines (الخطوط الجوية العربية السعودية), is the national carrier[2] airline of Saudi Arabia, based in Jeddah.[3] The airline's main operational base is at King Abdulaziz International Airport in Jeddah. King Khalid International Airport in Riyadh and King Fahd International Airport in Dammam are secondary hubs. The airline is the third largest in the Middle East in terms of revenue, behind Emirates and Qatar Airways.[4] It operates domestic and international scheduled flights to over 85 destinations in the Middle East, Africa, Asia, Europe and North America. Domestic and international charter flights are operated, mostly during the Ramadan and the Hajj season. Saudia is a member of the Arab Air Carriers Organization and joined the SkyTeam airline alliance on 29 May 2012. 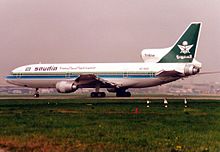 When U.S. President Franklin Delano Roosevelt presented a Douglas DC-3 as a gift to King Abdul Aziz Ibn Saud in 1945, the event marked the kingdom's gradual development of civil aviation. The nation's flag carrier, Saudia, was founded as Saudi Arabian Airlines in September 1945[5] as a fully owned government agency under the control of the Ministry of Defense, with TWA (Trans World Airlines) running the airline under a management contract.

The now-demolished Kandara Airport, which was close to Jeddah, served as the flag carrier's main base. Among the airline's early operations was a special flight from Lydda (Lod) in Palestine (today in Israel, site of Ben-Gurion International Airport), a British Mandate at that time, to carry Hajj pilgrims to Jeddah. The airline used five DC-3 aircraft to launch scheduled operations on the Jeddah-Riyadh-Hofuf-Dhahran route in March 1947, followed by its first international service between Jeddah and Cairo in the same month. Service to Damascus and Beirut followed in early 1948. The following year the first of five Bristol 170s was received. These aircraft offered the airline the flexibility of carrying both passengers and cargo.[citation needed]

In 1962, the airline took delivery of two Boeing 720s, becoming the fourth Middle Eastern airline to fly jet aircraft, after Middle East Airlines and Cyprus Airways with the de Havilland Comet in 1960 and El Al with the Boeing 707 in 1961.[6] On 19 February 1963, the airline became a registered company, with King Faisal of Saudi Arabia signing the papers that declared Saudia a fully independent company. DC-6s and Boeing 707s were later bought, and the airline joined the AACO, the Arab Air Carriers Organization. Services were started to Sharjah, Tehran, Khartoum, Mumbai, Tripoli, Tunis, Rabat, Geneva, Frankfurt, and London.

In the 1970s, a new livery was introduced. The carrier's name was changed to Saudia on 1 April 1972. Boeing 737s and Fokker F-28s were bought, with the 737s replacing the Douglas DC-9. The airline operated their first Boeing 747s service in 1977 when three Jumbo Jets were leased from Middle East Airlines and deployed on the London sector. The first all-cargo flights between Saudi Arabia and Europe were started, and Lockheed L-1011s and Fairchild FH-27s were introduced. New services, including the Arabian Express 'no reservation shuttle flights' between Jeddah and Riyadh. The Special Flight Services (SFS) was set up as a special unit of Saudia, and operates special flights for the royal family and government agencies. Service was also started to Rome, Paris, Muscat, Kano, and Stockholm. The Pan Am/Saudia joint service between Dhahran and New York City started on 3 February 1979.[citation needed]

In the 1990s, services to Orlando, Chennai, Asmara, Washington, D.C., Johannesburg, Alexandria, Milan, Málaga (seasonal), and Sanaa (resumption) were introduced. Boeing 777s, MD-90s and MD-11s were introduced. New female flight attendant uniforms designed by Adnan Akbar were introduced. A new corporate identity was launched on 16 July 1996, featuring a sand colored fuselage with contrasting dark blue tailfin, the center of which featured a stylized representation of the House of Saud crest. The Saudia name was dropped in the identity revamp, with Saudi Arabian Airlines name used.

Development since the 2000s

On 8 October 2000, Prince Sultan bin Abdulaziz Al Saud, the Saudi Minister of Defense and Aviation, signed a contract to conduct studies for the privatization of Saudi Arabian Airlines. In preparation for this, the airline was restructured to allow non-core units—including Saudia catering, ground handling services and maintenance as well as the Prince Sultan Aviation Academy in Jeddah—to be transformed into commercial units and profit centers. In April 2005, the Saudi government indicated that the airline may also lose its monopoly on domestic services.[7]

In 2006, Saudia began the process of dividing itself into Strategic Business Units (SBU); the catering unit was the first to be privatized.[8] In August 2007, Saudi Arabia's Council of Ministers approved the conversion of strategic units into companies. It is planned that ground services, technical services, air cargo and the Prince Sultan Aviation Academy, medical division, as well as the catering unit, will become subsidiaries of a holding company.[9]

The airline reverted to its abbreviated English brand name Saudia (used from 1972 to 1996) from Saudi Arabian Airlines (historic name in use until 1971 and reintroduced in 1997) on 29 May 2012; the name was changed to celebrate the company's entry into the SkyTeam airline alliance on that day, and it was a part of a larger rebranding initiative.[10]

In April 2016, Saudia announced the creation of a low-cost subsidiary, Flyadeal. The airline was launched as part of Saudia Group's SV2020 Transformation Strategy, which intends to transform the group's units into world-class organisations by 2020. Flyadeal serves domestic and regional destinations, began flights in mid-2017.[12]

World’s Most Improved Airline' in 2017 by SkyTrax

Saudia sponsored the Williams Formula One team from 1977 till 1984. In this period Williams would win two Constructors Championships and two Drivers Championships with Alan Jones and Keke Rosberg.

Saudia has codeshare agreements with SkyTeam partners and with the following airlines:[13]

As of September 2020[update], the Saudia fleet consists of the following aircraft including its passenger and cargo fleet:[19][20] 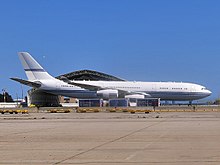 Saudi Royal Flight Airbus A340-200 that is the lone exception to Royal Flight aircraft in Saudia livery at JFK Airport, 2017. 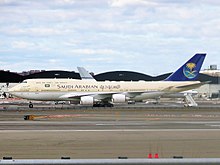 Saudia Special Flight Services, VIP flights, and Private Aviation operate the following, a number of which sport the airline's livery

Additionally Saudia Royal Flight division operates larger aircraft of government and the royal family under Saudia flight code and colour scheme (except for a single aircraft), these include

Some military C-130s are also painted with the Saudia colors and are flown by Royal Saudi Air Force crews to support Saudi official activities in the region and Europe. Since 2017 two mobile escalators (TEC Hünert MFT 500-01[29]) travel with the King and transported by separate aircraft.[30]

The inflight magazine of Saudia is called Ahlan Wasahlan (أهلاً وسهلاً "Hello and Welcome"). No alcoholic beverages[31] or pork are served on board in accordance with Islamic dietary laws. Its selected Airbus A330-300 and Boeing 777-300ER aircraft are equipped with Wi-Fi and mobile network portability on board. Most aircraft also offer onboard specialized prayer areas and a recorded prayer is played prior to takeoff.[32]