The Saudi Railways Organization (SRO) (Arabic: المؤسسة العامة للخطوط الحديدية‎) is one of two state-owned companies that operates Saudi Arabia's rail network along with Saudi Railway Company. The SRO operates a network of railways with a total length of approximately 1,380 kilometers. The network consists of two main lines. A 449 km passenger line that links Dammam with Riyadh, and a 556 km freight line that connects the King Abdul Aziz Port in Dammam with Riyadh. In addition, about 373 km of auxiliary lines branch from SRO's main lines and connect some industrial and agricultural areas, and military sites, with export ports and residential areas.

There are plans to extend the network to the Red Sea port of Jeddah and, eventually to the borders of Jordan, Yemen, and perhaps all the way to Egypt.[2]

Modern railways were introduced in Saudi Arabia after World War II, to facilitate the transport of goods for the Arabian American Oil Company, or Aramco (now Saudi Aramco), from ports located on the coast of the Persian Gulf to warehouses in Dhahran. Construction began in September 1947, and the first line was inaugurated on 20 October 1951. It was initially run by Aramco, but subsequently transferred to the Ministry of Finance, during which time it was known as the Railway Department. On 13 May 1966, the Saudi government issued a royal decree establishing the Saudi Railways Organization (SRO) to operate the railway system. Several development projects have been completed since then, including an extension of the line to Riyadh, construction of several passenger terminals and the opening of a dry port in Riyadh.[3] 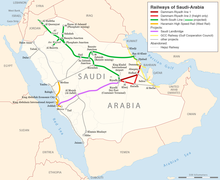 The SRO operates a network of railways with a total length of approximately 1,380 kilometers. Two main lines connect King Abdul Aziz Port in Dammam with Riyadh, while the other connects the city of Dammam with Riyadh. In addition, some auxiliary lines branch from SRO's main lines connect some industrial and agricultural areas and military sites with export ports and residential areas.[4] The network consists of the following lines:

The Dammam–Riyadh line is a 449 kilometer passenger line that connects Dammam with Riyadh, via Al-Ahsa and Abqaiq.

Haramain HSR is a high speed rail line linking Mecca and Medina, and connecting with the rest of the network at Jeddah. This will provide a safe and comfortable means of transport for Hajj pilgrims arriving via Jeddah. Construction works began in 2009, service started in October 2018. 320 km/h electric trains are planned.[5]

The cargo line is a 556 kilometer line that begins at the King Abdul Aziz Port in Dammam and passes through Al-Ahsa, Abqaiq, Al-Kharj, Haradh and Al-Tawdhihiyah, before terminating in Riyadh.

Planning for the line started in 1947 with an agreement between King Ibn Saud and ARAMCO to lay a 547 km (about 340 mi) freight line. Bechtel Construction Company was chosen to build the rail line and a sea port at the eastern end of the rail line at Dammam. Construction of the line began in September 1947. In 1948, veteran American railroad engineer James H. Gildea was hired to oversee the project. The most serious obstacle to building the rail line was the Persian Gulf shallows at Dammam. To allow deep draft vessels to unload, a rail causeway of approximately seven miles was built out into the Persian Gulf with the first five miles a rock causeway and the last couple of miles a section made of a steel trestle. One of the first vessels to unload was a Dutch freighter, in 1950, with a load of rails for construction of the line. The first trains started moving between Dammam and Riyadh in the early 1950s.[6]

Branch lines have a total length of 373 kilometers, and connect some industrial and agricultural production sites, and some military sites, with export ports and some residential areas.

Spanish manufacturer CAF delivered eight fast diesel locomotives in 2012, with one driving van trailer passenger car and four other passenger cars, with a leading power car unit; plus two spare power cars. They are used on the Dammam–Riyadh Line. During 2013 the travel time is 4:15 but there is a target of 3:00 for the future.

The SRO has several plans to expand the network as part of the Saudi Railway Master Plan 2010-2040 (SRMP). Some of the projects under the plan are: