Prior to the establishment of the Saudi Monetary Authority, the Saudi Hollandi Bank, a branch of the Netherlands Trading Society from 1926 acted as a de facto central bank. It kept the Kingdom's gold reserves and received oil revenues on behalf of the Saudi Arabian government.[3] In 1928 it assisted in the establishment of a new Saudi silver coin, commissioned by King Abdulaziz which became the Kingdom's first independent currency. The Saudi Hollandia Bank handed over its responsibilities to the SAMA when it was established in 1952[4] and became a model for other foreign banks in the kingdom.[5] The modern authority operates through regulatory infrastructure developed by Irish firm Vizor.[6]

SAMA is the Central Bank of Saudi Arabia, the functions of the SAMA include issuing the national currency, the Saudi Riyal, supervising commercial banks, managing foreign exchange reserves, promoting price and exchange rate stability, and ensuring the growth and soundness of the financial system, operating a number of cross-bank electronic financial systems such as MADA (previously SPAN), SARIE, and SADAD.[8]

The SAMA senior management comprises the governor, the vice-governor and five deputy governors.[9] 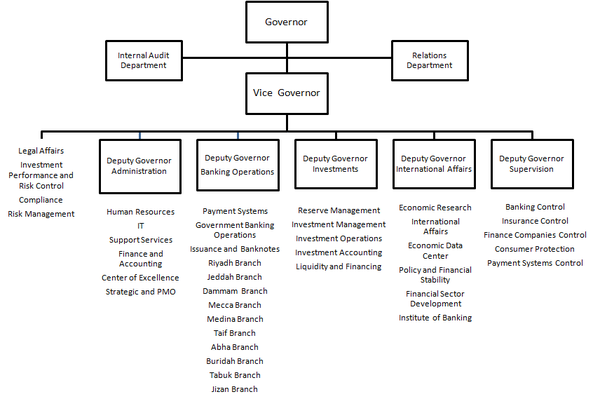 Organisational structure of SAMA as at May 2013.

The SAMA balance sheet is denominated in Saudi Riyals, which is pegged at an official rate of 3.75 against the US dollar. All currency notes issued by SAMA are fully backed by equivalent gold deposits.

In October 2015, Governor Fahad Abdullah Al-Mubarak of the Saudi Arabian Monetary Authority was ranked #2 on the Public Investor 100.[13]