His career in public service began in 1940 when he was made a deputy to then Riyadh governor or emir, Prince Nasser.[6] In 1947, Prince Sultan replaced Prince Nasser as governor of Riyadh.[8][9][10] Prince Sultan also assisted King Abdulaziz's attempts to establish a national administrative system based on the Islamic Sharia law during this period.[8] In 1947, Prince Sultan oversaw ARAMCO's construction of the Kingdom's rail link between Dammam and Riyadh. He was appointed as the kingdom’s first minister of agriculture in 1953[8] and minister of transport in 1955.[11]

Although the direct military experience of Prince Sultan was brief, heading the Royal Guard in Riyadh in the early 1950s, he felt a lifelong connection to the military and the cause of Saudi independence from an early age.[13] Major General Carl von Horn, Swedish commander of the UN observer mission during the Yemeni civil war, described the Prince Sultan as "a volatile and emotional young man" in the early days.[13]

Minister of Defense and Aviation

Sultan purchased U.S. tanks, fighter planes, missiles and AWACS (airborne warning and control systems). However, as a result of problems assimilating technology within its armed forces, a relatively high proportion of the military equipment is stored or under maintenance, despite a large portion of Saudi's $34 billion defense budget being spent on maintaining military equipment. Sultan allegedly became extraordinarily wealthy from kickbacks by Western businesses that handled multibillion-dollar defense contracts.[16] He was involved in many scandals, including the Al Yamamah deal.[17] However, his influence remained unhindered until his health began to deteriorate.[17] During his tenure, Saudi Arabia became the largest importer of U.S. arms. He was a strong proponent of U.S.-Saudi partnership.[18]

As well, Sultan authorized a deal with the British Aircraft Corporation (BAC) in 1965. His program, called Operation Magic Carpet, traded £16 million for six second-hand Lightnings, six Hawker Hunters, and a set of missile launchers going to Royal Saudi Air Force. Geoffrey Edwards served as the official intermediary. British pilots also came over, privately contracted.[13] Prince Sultan was an expert on the Yemen civil war and Soviet involvement in the Horn of Africa in 1985.[19]

In 1996, Prince Sultan opposed Pentagon plans to relocate U.S. troops to safer locations after the Dhahran complex bombings.[20] He visited Iran in May 1999 that was the first official visit of a Saudi minister since 1979.[21] 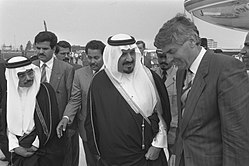 On 13 June 1982, after the death of King Khalid and Crown Prince Fahd became the King, Prince Sultan was appointed second deputy prime minister.[9][22] Opposition to his appointment as second deputy prime minister came in particular from two half brothers, Musaid and Bandar, both of whom, like Abdullah, were born in 1923 and therefore, were older than Prince Sultan, who was born in 1931. The objection of Prince Musaid was easily ignored since his son, Faisal bin Musaid, had assassinated King Faisal. However, the interests of Bandar bin Abdulaziz were much harder to ignore. Thus, he was compensated and the dispute was resolved.[23]

Prince Sultan, in December 1995, attempted to seize power through the support of the Ulema when Crown Prince Abdullah was in Oman for a summit of the Gulf Cooperation Council.[24] However, his attempted coup failed.[24]

Prince Sultan was one of the members of Al Saud Family Council established by Crown Prince Abdullah in June 2000 to discuss private issues such as business activities of princes and marriages of princess to individuals who were not member of House of Saud.[23]

On 1 August 2005, Sultan bin Abdulaziz was designated heir apparent despite having a discord with King Abdullah.[26] During the same period he led the group called Sudairi Seven, being the eldest of the group after King Fahd's demise.[27]

A non-profit charity organization, Sultan bin Abdulaziz Al Saud Foundation, was set up and funded by Prince Sultan in 1995 for social objectives. The foundation includes the following centers in different countries:

He inaugurated and served as the patron of Prince Sultan University in Riyadh. It was named in his honor by the university's parent institution, Al-Riyadh Philanthropic Society, which was founded by the prince's brother, Salman of Saudi Arabia, who would later become king. This is the first private/non-profit university established in the kingdom.

In 2002, families of the victims of the September 11 attacks in the United States sued Prince Sultan and other senior Saudi officials for their alleged contributions to al-Qaeda linked charities.[36] The lawsuits were thrown out by a US federal judge due to insufficient evidence submitted.[36]

In April 2005, Sultan donated £2 million to the Ashmolean Museum. This is regarded[by whom?] as one of the most controversial donations Oxford University received. A year after his donations to establish an art museum, Oxford University agreed to 'expedite' the scholarship application process for Saudi students, and identify colleges for ten Saudi students from Prince Sultan University (PSU). When this arrangement became public, it led to criticism from both academics and students stating that it was no academic worth to the university, bypassing Oxford’s governing council, and breaching the admissions process for prospective students.[37]

A press release issued by Oxford University on 20 April 2005 said that:

HRH Prince Sultan bin Abdulaziz Al Saud has given the Ashmolean Museum a substantial donation to provide a fitting home for the Museum's internationally renowned collection of Islamic art. The total value of the gift is £2 million, which will also provide for ten scholarships at the University of Oxford for Saudi Arabian students.

The press release added further that ‘the new gallery, part of the ambitious redevelopment of one of the world’s oldest museums, will be named the “Prince Sultan bin Abdulaziz al Saud Gallery”’. Arab News on 21 April 2005 reported that Sultan’s donation was a ‘move to promote understanding between Islam and the West’, adding that ‘Saudi and British officials’ had said that the new gallery ‘will help to portray Islamic culture and civilization in right perspectives.’[37]

Prince Sultan had thirty-two children by his multiple wives. His eldest son Khalid bin Sultan, after Prince Sultan's death, was appointed deputy minister of defense and served in the post until 20 April 2013.[38] Bandar bin Sultan was the former ambassador to the USA. He was also the secretary general of the national security council between 2005 and January 2015, and the former head of the general intelligency directorate. Fahd bin Sultan is the governor of the Tabuk province. Salman bin Sultan, another son, is the former deputy defense minister.[39] Faisal bin Sultan (born 1951) is the secretary general of Sultan bin Abdulaziz Al Saud Foundation.[40][41]

Prince Sultan was regarded[by whom?] as a workaholic .He doled out money at banquets in keeping with tribal custom. A conservative, it was expected that he would have put a brake on Abdullah's timid reforms, if he had become king, he was considered to be pro-American.[49]

Sultan took a lifetime anti-communist and anti-Soviet view, based on his dislike of Soviet state atheism as well as Soviet interest in Gulf oil and access to ports that he felt risked Saudi independence. He rebuked U.S. President Jimmy Carter for what he saw as "pusillanimity" in the face of the Soviet invasion of Afghanistan.[13]

In a 23 October 2001 interview in Kuwaiti newspaper As Seyassa, concerning 9/11 attacks, Sultan stated “Who stands behind this terrorism and who carried out this complicated and carefully planned terrorist operation? Osama bin Laden and those with him have said what indicates that they stand behind this carefully planned act. We, in turn, ask: Are bin Laden and his supporters the only ones behind what happened or is there another power with advanced technical expertise that acted with them?”.[50]

Prince Sultan’s wealth in 1990 was reported to be $1.2 billion.[51] Later, his fortune was estimated at $270 billion, which he distributed between his sons prior to his death in October 2011 in order to support their political position in the competitive princely arena.[52][53] Prince Sultan owned 2–8a Rutland Gate, the former London residence of the Lebanese politician and businessman Rafic Hariri. Prince Sultan had been given the property after Hariri's assassination in 2005.[54]

Documents in the Paradise Papers release show Prince Sultan used the law firm Appleby at the center of the use of offshore businesses and trusts by world leaders.[55]

Prince Sultan was rumored to have had colon cancer in 2003. A foreign correspondent was forced to leave the country after reporting his health problems.[56]

In 2004, Prince Sultan was diagnosed with colon cancer and underwent several corrective surgeries. He underwent an operation to remove an intestinal polyp in Jeddah in 2005.[8][57] Prince Sultan visited a Swiss clinic in late April 2008.[57] In April 2009, he began to suffer from Alzheimer's disease.[58][59]

A leaked March 2009 diplomatic cable from WikiLeaks stated that U.S. diplomats viewed Prince Sultan as "for all intents and purposes incapacitated".[60] He was possibly suffering dementia, specifically Alzheimer's disease.[61]

In February 2009, Sultan spent several months in New York City at New York–Presbyterian Hospital and underwent surgery in New York. He then convalesced at Agadir, Morocco. He went back to Saudi Arabia, but soon returned to Morocco in August 2009. During his vacation, the Saudi cabinet increased officer salaries, a traditional domain of Sultan.[62]

In 2009, King Abdullah took charge of all defense purchases and reduced the power of the Defense Ministry. In October 2010, Abdullah personally conducted much of the negotiations for the U.S. arms package worth over $60 billion.[63]

In November 2010, Sultan received in Agadir Lebanese Prime Minister Saad Al-Hariri to discuss the future of Lebanon's government.[64] He had been receiving treatment since 2009 for what analysts and diplomats believed to be cancer.[65] At the end of November 2010, he returned to Saudi Arabia because King Abdullah had left for the United States for surgery. His return was seen as a legal formality necessary under Saudi law, which stipulates that only one of the kingdom's top two officials can be abroad at a given time.[66]

The Saudi Royal court announced on 22 October 2011 that Prince Sultan died at dawn of an unspecified illness.[67][68] According to media reports, Prince Sultan had been battling cancer and had been seeking medical treatment in the United States since mid-June 2011.[69][70] He had a surgical operation in New York in July 2011.[71] Unnamed U.S. officials cited by The New York Times stated that he died at New York-Presbyterian Hospital in Manhattan.[72]

His body was taken from New York City to Riyadh on 24 October 2011.[71] His funeral was held at the Imam Turki bin Abdullah mosque in Riyadh on 25 October 2011 in the presence of King Abdullah bin Abdulaziz.[69] He was buried in Al Oud cemetery in Riyadh.[73]

Various leaders, including the president of Afghanistan, Farouk Al Sharaa, the then vice-president of Syria, the Iranian foreign minister and the head of Egypt's ruling military council, participated in the funeral.[71] Additionally, other statesmen went to Riyadh to offer their condolences, such as the US Vice President Joe Biden, Pakistani President Asif Ali Zardari and Malaysian Prime Minister Najib Razak.[74]

Among others, Prince Sultan was the recipient of the following honours and medals:

He was also posthumously given the King Khalid award in 2011.[76]