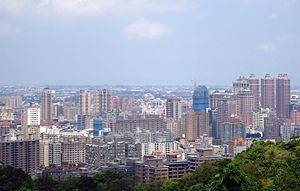 Taoyuan (pictured above; 2.3 million) is the satellite city of Taipei (7 million). Many of the former's residents work in and commute to the latter.

Satellite cities or satellite towns are smaller municipalities that are adjacent to a major city which is the core of a metropolitan area.[1][2] They differ from mere suburbs, subdivisions and especially bedroom communities in that they have municipal governments distinct from that of the core metropolis and employment bases sufficient to support their residential populations. Conceptually, satellite cities could be self-sufficient communities outside of their larger metropolitan areas. However, functioning as part of a metropolis, a satellite city experiences cross-commuting (that is, residents commuting out of and employees commuting into the city).

Satellite cities versus other types of settlement

Satellite cities are different from and are sometimes confused with the following related patterns of development.

Satellite cities differ from suburbs in that they have distinct employment bases, commutersheds, and cultural offerings from the central metropolis, as well as an independent municipal government. Satellite cities are not bedroom communities.

Satellite cities differ from edge cities, which are suburbs with large employment bases and cultural offerings, in that satellite cities must have a true historic downtown, a distinct independent municipal government, existed as a city prior to becoming interconnected with the larger metropolitan core, and are surrounded by a belt of rural land between themselves and the central city.[citation needed]

Conceptually, both satellite cities and some types of edge city could be (and once were) self-sufficient communities outside of their larger metropolitan areas, but have become interconnected due to the suburban expansion of the larger metropolis. However, while edge cities may have their own government and share many characteristics with satellite cities, they are much more physically integrated with the core city and would not exist in anything like their present form if not for the suburban expansion of their larger neighbor. Edge cities are activity nodes within a metro area, not miniature metro areas themselves.

Some satellite cities that are particularly close or well connected to their larger neighbors and/or have their own historic downtown may also qualify as the uptown variety of edge cities, but the terms are not synonymous.

In some cases large metropolitan areas have multiple centers of close to equal importance. These multi-polar cities are often referred to as twin cities. Multi-polar cities differ from satellite cities in such cases :

For example, Fort Worth, Texas is a twin of Dallas, Texas because though Fort Worth is somewhat smaller, it is proportionally close enough and physically integrated enough with Dallas to be considered a twin rather than a satellite. However, Waco, Texas is a satellite town of both cities. Generally speaking, cities that are listed as being part of the same urbanized area should be considered twins, rather than one having a satellite relationship to the other. 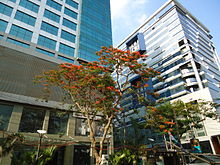 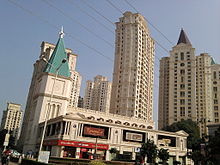 Statistics New Zealand defines a satellite urban community as one where 20 percent or more of the resident population's work in a main urban area (30,000 or more). The following towns meet this criterion:[6]