Italy Porto Torres Sardinian language
This article is about the city. For the province, see Province of Sassari.
Comune in Sardinia, Italy

listen); Sassarese: Sàssari; Sardinian: Tàtari) is an Italian city and the second-largest of Sardinia in terms of population with 127,525[6] inhabitants, and a Functional Urban Area of about 222,000 inhabitants.[7] One of the oldest cities on the island, it contains a considerable collection of art.

Since its origins at the turn of the 12th century, Sassari has been ruled by the Giudicato of Torres, the Pisans, as an independent republic in alliance with Genoa, by the Aragonese and the Spanish, all of whom have contributed to Sassari's historical and artistic heritage. Sassari is a city rich in art, culture and history, and is well known for its palazzi, the Fountain of the Rosello, and its elegant neoclassical architecture, such as Piazza d'Italia (Italy Square) and the Teatro Civico (Civic Theatre).[8]

As Sardinia's second most populated city, and the fifth largest municipality in Italy (547 km2), it has a considerable amount of cultural, touristic, commercial and political importance in the island.[9] The city's economy mainly relies on tourism and services, however also partially on research, construction, pharmaceuticals and the petroleum industry.[9]

Sassari is located in north-western Sardinia, at 225 metres (738 ft) above sea level. The area rises up on a wide karstic plateau that slopes gently down towards the Gulf of Asinara and the Nurra plain. The city is surrounded by a green belt of thousands of hectares of olive plantations, which from the 19th century have partly replaced the mixed woodlands of oak and other Mediterranean trees as well as the maquis shrubland. The thinly populated Nurra Plain, located to the west, occupies the main part of the region of Sassari, while the urban agglomeration, with a population of about 275,000 inhabitants, is located to the south east. The abundance of water, with about 400 springs and artesian wells, has made for much development of horticulture over the centuries.

According to a survey by Weatherwise, Sassari is the city with the fourth best climate in the world.[11]

Although Sassari was founded in the early Middle Ages, the surrounding area has been inhabited since the Neolithic age, and throughout ancient history, by the Nuragics and the Romans.
Many archaeological sites and ancient ruins are located inside or around the town: the prehistoric step pyramid of Monte d'Accoddi, a large number of Nuraghes and Domus de Janas (Fairy Houses), the ruins of a Roman aqueduct, the ruins of a Roman villa discovered under San Nicholas Cathedral, and a portion of the ancient road that connected the Latin city of Turrys Lybissonis with Caralis. In the locality of Fiume Santo is also found a fossil site where an Oreopithecus bambolii, a prehistoric anthropomorphic primate, was discovered, dated at 8.5 million years.

The Sassari Republic's medieval statutes written in Latin and Sardinian

The origin of the city remains uncertain. Among the theses, according to folk tradition the first village was founded around the 9th-10th century AD by the inhabitants of the ancient Roman port of Turris Lybisonis (current Porto Torres), who sought refuge in the mainland to escape the Saracen attacks from the sea.

It developed from the merger of a number of separate villages, such as San Pietro di Silki, San Giacomo di Taniga, and San Giovanni di Bosove. The oldest mention of the village is in an 1131 document in the archive of the Monastery of St. Peter in Silki where is cited a guy named Jordi de Sassaro (George of Sassari), a serf from the nearby village of Bosove. Sassari was sacked by the Genoese in 1166. Immigration continued until, in the early 13th century, it was the most populous city in the Giudicato of Torres, and its last capital. After the assassination of Michele Zanche, the latter's last ruler in 1275, Sassari became subject to the Republic of Pisa with a semi-independent status.

The proclamation of the Republic of Sassari (The Council), Giuseppe Sciuti, 1880, Sassari

In 1284 the Pisans were defeated by the Genoese fleet at the Battle of Meloria, and the city was able to free itself: it became the Republic of Sassari, the first and only early independent renaissance city-state of Sardinia, with statutes of its own, allied to Genoa; the Genoese were pleased to see it thus withdrawn from Pisan control. Its statutes of 1316 are remarkable for the leniency of the penalties imposed when compared with the penal laws of the Middle Ages.

The baroque façade of St. Nicholas

From 1323 the Republic of Sassari decided to side with the King of Aragon, in whose hands it remained for much of the following centuries, though the population revolted at least three times. The revolts ceased when King Alfonso V of Aragon nominated the town as a Royal Burg, directly ruled by the King and free from feudal taxation, during a period in which it may have been the most populous city in Sardinia. Further attempts made by Genoa to conquer the city failed. In 1391 it was conquered by Brancaleone Doria and Marianus V of Arborea, of the independent Sardinian Giudicato of Arborea, of which it became the last capital. However, in 1420 the city was sold along with the remaining territory for 100,000 florins to the Crown of Aragon, replaced by Spain after 1479 on the joining of the Aragonese and Castilian thrones. During the period of Aragonese and then Spanish domination the city was known as Sàsser in Catalan language and Saçer in old Spanish.

The city alternated years of crisis, featuring economic exploitation, the decrease of the maritime trade, made unsafe by the daily raids of Saracen pirates, political corruption of its rulers, the sacking of Sassari in 1527 by the French, and two plagues in 1528 and 1652, with periods of cultural and economic prosperity. The Jesuits founded the first Sardinian university in Sassari in 1562. In the same year the first printing press was introduced and the ideals of Renaissance humanism became more widely known. Several artists of the Mannerist and Flemish schools practiced their art in the city.

Giovanni Maria Angioy, the Emissary of the Viceroy enters Sassari (1795).

After the end of the Spanish period following the European wars of the early 18th century, the brief period of Austrian rule (1708–1717) was succeeded by domination by the Piedmontese, who then took over the Title of Kingdom of Sardinia (1720–1861). In 1795 an anti-feudal uprising broke out in the town, led by the Emissary of the Viceroy Giovanni Maria Angioy, a Sardinian civil servant, who later fought unsuccessfully against the house of Savoy. The city was occupied by troops at the time. The dynasty of the Piedmontese King of Sardinia went on to the monarchs of Italy. Sassari, along with the rest of Italy, became part of the newly created Kingdom of Italy.

At the end of the 18th century the university was restored. In 1836, after six hundred years, the medieval walls were partially demolished, allowing the town to expand. New urban plans were developed, on the model of the capital of the new regime's, (Turin), with geometric streets and squares.

Sassari became an important industrial center. In the 19th century it was the second most important town in what was to become the future Italy for the production of leather, and in 1848 the Sassarese entrepreneur Giovanni Antonio Sanna gained control of the mine at Montevecchio, becoming the third richest man in the new Kingdom of Italy. The first railway was opened in 1872.

In 1877 the old Aragonese castle was demolished, and on the site the "Caserma La Marmora" was built, where the headquarters of "Brigata Sassari" is still located. Founded in 1915, it still consists mainly of Sardinian soldiers.

At the end of the 19th century new urban developments grew on Cappuccini Hill and to the south of the city, architecturally dominated by Eclecticism, Art Nouveau and Art Deco styles, which created a movement towards the hybrid experimentation of new local architectural styles, known as the Sassarese Liberty.

During the Fascist dictatorship the town had over fifty thousand inhabitants and new neighbourhoods were built, the most important of these being Monte Rosello and Porcellana, typical examples of Rationalist Architecture. On the other hand, the newspaper La Nuova Sardegna, considered subversive, was closed down.

During the Second World War three Allied attempts to bomb the town failed: only the railway station was damaged, and there was only one casualty.

Today Sassari is the main cultural, administrative and historical centre of Northern Sardinia. 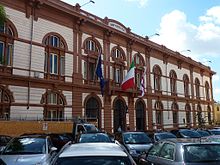 The University of Sassari is the oldest in Sardinia (founded by the Jesuits in 1562), and has a high reputation, especially in Jurisprudence, Veterinary Medicine, Medicine, and Agriculture. Its libraries contain a number of ancient documents, among them the condaghes, Sardinia's first legal codes and the first documents written in the Sardinian language (11th century) and the famous Carta de Logu (the constitution issued by Marianus IV of Arborea and updated later by his daughter the Giudichessa Eleanor of Arborea) in the 14th century.

The University of Sassari gained first place in 2009 in the ranking for the best “medium-sized” Italian university, awarded by the Censis Research Institute.

Sassarese (Sassaresu or Turritanu) is much closer to Corsican and Tuscan language than it is to Sardinian, although this fact has caused some political controversy. It originated as a lingua franca between the first Sardinians, Corsicans, Tuscans and Ligurian people, during the period of the maritime republics. The original Tuscan structure was influenced by the Sardinian Logudorese spoken in the area, with a strong influence that can be felt in its phonetics and vocabulary, and by Catalan and Spanish in vocabulary.

Sassarese is spoken in Sassari and its immediate area by approximately 120,000 people out a total population of 175,000 inhabitants; it is also the language of the north-west of Sardinia, including Stintino, Sorso and Porto Torres; in the mid-northern areas of Sardinia, its Castellanesi dialects of Castelsardo, Tergu and Sedini are more similar to the Gallurese. 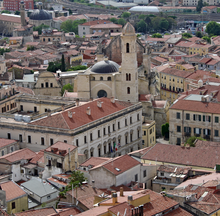 View of the medieval district of the town 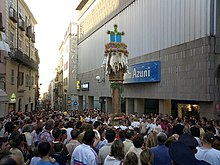 Notable people born here include the former presidents of the Italian Republic, Antonio Segni and Francesco Cossiga, and Enrico Berlinguer, secretary of the Italian Communist Party.

Sassari is also the birthplace of Domenico Alberto Azuni, a jurist expert in commercial law. 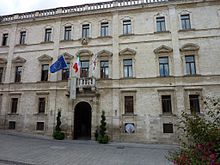 Palace of the Duke of Asinara (City Hall)
See also: List of mayors of Sassari

The Municipal Council of Sassari is led by a left-wing majority, first elected in May 2005 and confirmed in 2010 and 2014. The mayor is Nicola Sanna, member of the Democratic Party.

The economy of town is mainly focused on services and the advanced tertiary sector. It is the principal administrative centre of central and northern Sardinia. The main Sardinian banks (Banco di Sardegna and Banca di Sassari) have head office and presidency in the city.

Tourism is concentrated mainly along the coasts. Platamona, Porto Ferro, Porto Palmas and Argentiera are the principal seaside tourist spots of the municipality. 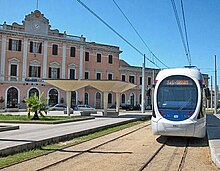 The nearest airport, Fertilia International Airport, is 25 km (16 mi) from the city center, and the closest seaport is located at Porto Torres, 16 km (10 mi) away.

Palasport Roberta Serradimigni is the biggest indoor arena in Sardinia for capacity.

Sassari is twinned with: