Tsuutʼina children in traditional regalia at a Stampede Parade 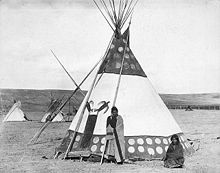 Tsuutʼina man and his wife

The Tsuutʼina Nation[2] (also Tsu Tʼina, Tsuu Tʼina, Tsúùtínà – "a great number of people";[3] formerly Sarcee, Sarsi) is a First Nation band government in Alberta, Canada. Their territory today is confined to the Tsuu T'ina Nation 145 reserve, whose east side is adjacent to the southwest city limits of Calgary. Their traditional territory on the Plains was much more extensive. The land area of the reserve is 283.14 km2 (109.32 sq mi), and it had a population of 1,982 in the Canada 2001 Census. The northeast portion of the reserve was used as part of CFB Calgary, a Canadian Army base, from 1910 to 1998. In 2006, the land was returned to the Nation by the Government of Canada. The Tsuutʼina people were formerly called the Sarsi or Sarcee, words which are believed to have been derived from a Blackfoot word meaning stubborn ones. The two peoples long had conflict over territory. Because of its origins from an enemy, the term is now viewed as offensive by most of the Tsuutʼina.[citation needed]

The proximity of the territory to the City of Calgary had led to disagreement over the Province of Alberta's plans to construct the southwest portion of Highway 201, a ring road. The freeway nearly encircles the City of Calgary and the new portion must pass through Tsuutʼina land to avoid environmentally sensitive areas. A 2009 referendum by the Nation rejected a plan to transfer reserve land to the Province of Alberta to permit construction of the southwest portion of the ring road. Some members of the Nation were upset by the rejection of the land transfer,[4] while others viewed it as a triumph both environmentally and for the Nation. A subsequent referendum held by the Nation in 2013 approved the land transfer for the ring road, the Tsuu T'ina portion of which was named Tsuut'ina Trail, even though it caused the forced removal of some residents from their traditional land by the Chief and Council.[5] The construction resulted in the destruction of 428 hectares of traditional land including recently protected wetlands. [6]

In 2007, the Tsuutʼina opened the Grey Eagle Casino just outside Calgary city limits.[7] The Grey Eagle complex began a major expansion, including construction of a hotel, in 2012.[8] Both the initial construction of the casino and the expansion have been accompanied by concerns among city residents about traffic tie-ups in the area of the casino.

The Tsuutʼina are an Athapaskan group, once part of the more northerly Dane-zaa ('Beaver Indians') nation, who migrated south onto the Great Plains during the 1700s, prior to any written records of the area. Tsuutʼina oral history has preserved the memory of their separation from the Dane-zaa.[9][10]

Explorer David Thompson said that the Tsuutʼina lived in the Beaver Hills near present-day Edmonton during the 1810s, where they cohabited with the Cree. At some point, however, they came in conflict with the Cree and moved further to the south, eventually forming an alliance with the Blackfoot.[11]

The Tsuutʼina likely acquired most of their Plains Indian culture from the Blackfoot.[citation needed] Although in most respects the Tsuutʼina are typical Northern Plains Indians, their Tsuutʼina language remains pure Athabaskan to this day. As such it is closely related to the languages of the Dene groups of northern Canada and Alaska, and also to those of the Navajo and Apache peoples of the American Southwest. Migrating over one thousand years ago, the latter tribes developed separately, becoming the most southerly of the Athabaskan peoples.

The Tsuutʼina were noted among other northern Plains tribes for their tanned bison robes and fine buckskins, likewise their handcrafted saddles and cherry wood bows. As early as 1910 the Tsuutʼina were also noted as farmers and cattlemen, and they continue in these occupations at the present time.