Road to Avonlea Away from Her Stories We Tell
Canadian actress, film director and screenwriter

Polley made her feature film directorial debut with Away from Her (2006), for which she won a Genie Award for Best Achievement in Direction and was nominated for an Academy Award for Best Adapted Screenplay.[1] Polley's second film, Take This Waltz (2011), premiered at the 2011 Toronto International Film Festival.[2]

Polley was born and raised in Toronto, Ontario, the youngest of five children born to Diane Elizabeth Polley (née MacMillan). Her siblings are Susy and John Buchan from Diane's first marriage to George Deans-Buchan, and Mark and Joanna Polley from her second marriage to Michael Polley (1933–2018), a British-born actor who became an insurance agent after Diane and he started a family.[7][8]

Her mother was an actress (best known for playing Gloria Beechham in 44 episodes of the Canadian TV series Street Legal) and a casting director. She died of cancer the week of Polley's 11th birthday.[9]

Polley was raised by Diane and Michael.[10] During her childhood, Polley's siblings teased her because she bore no physical resemblance to Michael. Polley discovered as an adult that her biological father was actually Harry Gulkin, with whom her mother had an affair (as chronicled in Polley's film Stories We Tell).[11] Gulkin, the son of Russian Jewish immigrants, was a Quebec-born film producer who produced the 1975 Canadian film Lies My Father Told Me, and had met Diane after attending a play in which she acted in Montreal in 1978.[12][13][14] When Polley turned 18, she decided to follow up on suggestions from her mother's friends that her biological father might be Geoff Bowes—one of three castmates from her mother's play in Montreal.[11] Meeting with Gulkin as just someone who could provide information about Diane in Montreal, he informed Polley of his affair with Diane.[11] Bowes and Michael Polley also confirmed, in Stories We Tell, that they had sexual relations with Diane during the run of the Montreal play.[11] Gulkin's paternity was later confirmed by a DNA test.[3][15]

Her first appearance on screen was at the age of four, as Molly in the Disney film One Magic Christmas. She was also in the pilot episode for Friday the 13th – The Series, as well as appearing in a small role in William Fruet's sci-fi horror film Blue Monkey, both in 1987. At age eight, she was cast as Ramona Quimby in the television series Ramona, based on Beverly Cleary's books.

That same year, she played one of the lead characters in Terry Gilliam's The Adventures of Baron Munchausen. Polley burst into the public eye in 1990 as Sara Stanley on the popular CBC television series Road to Avonlea. The series made her famous and financially independent, and she was hailed as "Canada's Sweetheart" by the popular press.[16] The show was picked up by the Disney Channel for distribution in the United States. At the age of 12 (around 1991), Polley attended an awards ceremony while wearing a peace sign to protest the first Gulf War. Disney executives asked her to remove it, and she refused. This soured her relationship with Disney, though she continued on Road to Avonlea until 1994.[17] The show ran until 1996; Polley did return as Sara Stanley for an episode in 1995 and for the series finale.

Polley appeared as Lily on the CBC television series Straight Up. It ran from 1996 to 1998 and she won the Gemini Award for Best Performance in a Children's or Youth Program or Series for her role. Polley's subsequent role as Nicole Burnell in the 1997 film The Sweet Hereafter brought her considerable attention in the United States; she was a favourite at the Sundance Film Festival. Her character in the film was an aspiring singer, and on the film's soundtrack, she performed covers of The Tragically Hip's "Courage" and Jane Siberry's "One More Colour," as well as the film's title track, which she co-wrote with Mychael Danna.[18]

In 1998, Polley appeared in the critically acclaimed film Last Night. The following year, she starred as part of the ensemble cast in the film Go. 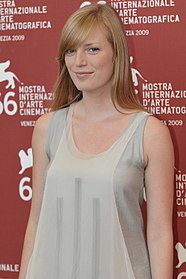 Polley at the premiere of Mr. Nobody at the 2009 Venice Film Festival

She was cast in the role of Penny Lane in the big-budget 2000 film Almost Famous, but dropped out of the project to return to Canada for the low-budget The Law of Enclosures. Her role in the 2003 film My Life Without Me garnered the Genie Award for Best Performance by an Actress in a Leading Role in 2004. In the same year, she starred in a lead role in the remake of Dawn of the Dead, which was a departure from her other indie roles.

In 2005, she starred in The Secret Life of Words, opposite Tim Robbins and Julie Christie. She was nominated as Best European Actress by the European Film Academy for her role as Hanna.[19]

In 2006, Polley took a role on the acclaimed series Slings and Arrows during its third and final season. Polley's father, Michael Polley, was a regular on the show during its entire three-season run. She served as a member of the 2007 Cannes Film Festival jury.[20]

In 2008, Polley appeared as Nabby Adams in the HBO miniseries based on the life of John Adams. Polley played Elise in Jaco Van Dormael's Mr. Nobody, which was released in 2010. Critical response has praised the film's artistry and Polley's acting.[21] Later that year, she also appeared in a cameo role in Bruce MacDonald's film Trigger.

In 1999, Polley made her first short film, The Best Day of My Life, for the On the Fly 4 Film Festival. She also made a second short film that year, Don't Think Twice. Polley attended the Canadian Film Centre's directing program in 2001, and won the Genie Award for Best Live Action Short Drama in 2003 for her short film I Shout Love. 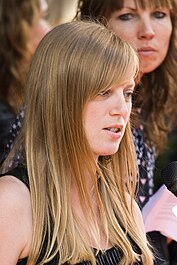 She made her feature-length film directing debut with Away from Her, which Polley adapted from the Alice Munro short story The Bear Came Over the Mountain. The movie, starring Julie Christie (with whom she had played in No Such Thing, 2001, and The Secret Life of Words, 2005), debuted at the Toronto International Film Festival on September 11, 2006, as part of the TIFF's Gala showcase.

Away from Her was acquired by Lionsgate for release in the US for the sum of $750,000. It drew rave reviews from Variety, The Hollywood Reporter, and the three Toronto dailies, both for the performances of Christie and her co-star, Canadian actor Gordon Pinsent, and for Polley's direction. It also earned Polley a 2007 Academy Award nomination for Best Adapted Screenplay,[1] and won the Genie Award for Best Achievement in Direction. At the 2008 Genies, she was also awarded the Claude Jutra Award, which recognizes outstanding achievement by a first-time feature film director.[22]

In late 2012, Polley announced that she would be adapting Margaret Atwood's novel Alias Grace.[6] Polley first wrote to Atwood asking to adapt the novel when she was 17. They held off for 20 years until she was ready to make the show.[24] In August 2014, during a profile of her work as a director, Polley announced that Alias Grace was being adapted into a six-part miniseries.[25] In June 2016, the series was confirmed with Polley writing and producing. The series premiered in 2017 on CBC Television in Canada; it streams on Netflix globally, outside of Canada.[26] It received positive reviews from critics.[5]

In June 2014, it was announced that she would be writing and directing an adaptation of John Green's Looking for Alaska.[27] In March 2015, Polley was hired to write the script for a new adaptation of Little Women, as well as potentially direct;[28] However, Polley's involvement in the project never went beyond initial discussions, despite reports.[29] it was subsequently announced that June that, due to scheduling conflicts Polley would no longer be directing Looking for Alaska.[30][31]

In an interview, Polley stated that she takes pride in her work and enjoys both acting and directing, but is not keen on combining the two:

I like the feeling of keeping them separate. I find that really gratifying. I can't imagine combining those. For me, I love the feeling of using different parts of my brain separately.[32]

In a 2015 retrospective of the movie Go, Mike D'Angelo of The A.V. Club commented that Polley's decision to go into directing had "deprived the world of many potentially great performances", calling her a "superb actor".[33].

Following the row with Disney as a twelve year old for wearing a peace sign to protest the Gulf War, Polley dedicated more of her efforts to politics, becoming a prominent member of the Ontario New Democratic Party (ONDP), where Ontario legislator Peter Kormos was her political mentor. In 1996, she gave a nomination speech for Kormos at the ONDP leadership convention which she later referred to as the "proudest moment in [her] life".[34]

In 1995, she lost two back teeth after being struck by a riot police officer during a protest against the provincial Progressive Conservative government of Mike Harris in Queen's Park.[8][35] She was subsequently involved with the Ontario Coalition Against Poverty. She subsequently scaled back her political activism.[35] She was part of a group in 2001 which opposed the proposed Free Trade Area of the Americas. The 3rd Summit of the Americas was held in Quebec City in April 2001.[36] In 2003, she was part of former Toronto mayor David Miller's transition advisory team.

In 2009, Polley directed a two-minute short film in support of the Heart and Stroke Foundation of Canada. In advance of the film's airing in Canada during the 82nd Academy Awards, and following news reports that characterized the film as a marketing exercise for the margarine company Becel,[37][38][39] Polley withdrew her association with the film. "In December 2009, I made a film to be aired during the Academy Awards that I believed was to promote the Heart and Stroke Foundation. When I agreed to make this film ["The Heart"], I was thrilled, as I was proud to be associated with the work of this incredible organization. However, I have since learned that my film is also being used to promote a product. Regretfully, I am forced to remove my name from the film and disassociate myself from it. I have never actively promoted any corporate brand, and cannot do so now."[40][41][42] In response, Becel said it was a "founding sponsor" of the Heart Truth campaign and had commissioned the film "to put heart health on the radar of Canadian women".[43]

On October 15, 2017, Polley wrote an op-ed piece in The New York Times detailing her experience with Harvey Weinstein and with Hollywood's treatment of women generally, and making a connection between Hollywood's female problem and Polley's not having acted in years.[45]

In 2007, Polley discovered that her father, Michael Polley, who had raised her, was not her biological father. The story of her mother's affair and her biological father Harry Gulkin, producer of the film Lies My Father Told Me (1975), was chronicled in Polley's film Stories We Tell (2012).[11]

On August 23, 2011, Polley married David Sandomierski, who at the time was working on his SJD degree (equivalent to a PhD in law) at the University of Toronto, which he would complete six years later, in 2017.[47][48]

In August 2014, Polley revealed that she had given birth to a second daughter.[49]

As writer, director, or producer

On October 16, 2010, it was announced that she would receive a star on Canada's Walk of Fame.[51] In June 2013, she received the National Arts Centre Award recognizing achievement over the past performance year at the Governor General's Performing Arts Awards, where she was the subject of a short vignette by Ann Marie Fleming entitled Stories Sarah Tells.[52] Polley was appointed an Officer of the Order of Canada on December 30, 2013.[53]

This film-related list is incomplete; you can help by expanding it.