Sanremo or San Remo (Italian: [sanˈrɛːmo]; Ligurian: Sanrému,[3] locally Sanrœmu) is a city and comune on the Mediterranean coast of Liguria, in northwestern Italy. Founded in Roman times, it has a population of 55,000, and is known as a tourist destination on the Italian Riviera. It hosts numerous cultural events, such as the Sanremo Music Festival and the Milan–San Remo cycling classic.

The name of the city is a phonetic contraction of Sant'Eremo di San Romolo, which refers to Romulus of Genoa, the successor to Syrus of Genoa. It is often stated in modern folk stories that Sanremo is a translation of "Saint Remus", a deceased Saint. In Ligurian, his name is San Rœmu. The spelling San Remo is on all ancient maps of Liguria, the ancient Republic of Genoa, Italy in the Middle Ages, the Kingdom of Sardinia, and the Kingdom of Italy. It was used in 1924 in official documents under Mussolini. This form of the name appears still on some road signs and, more rarely, in unofficial tourist information. It has been the most widely used form of the name in English at least since the 19th century. 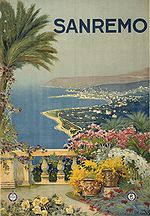 Sanremo postcard from the 1920s

Once the Roman settlement of Matutia or Villa Matutiana, Sanremo expanded in the Early Middle Ages when the population moved to the high grounds. The nobility built a castle and the walled village of La Pigna to protect the town from Saracen raids.

At first subjected to the countship of Ventimiglia, the community later passed under the dominion of the Genoese bishops. In 1297 they sold it to the Doria and De Mari families. It became a free town in the second half of the 15th century, after which it expanded to the Pigna hill and at Saint Syrus Cathedral. The almost perfectly preserved old village remains.

Sanremo remained independent of Genoese Republic. In 1753, after 20 years of fierce conflicts, it rose against Genoese hegemonical attempts. At that time Genoa built the fortress of Santa Tecla, situated on the beach near the port. The fortress was used as a prison until 2002. It is now being transformed into a museum.

After the French domination and the Savoy restoration in 1814, Sanremo was annexed to the Kingdom of Sardinia. From the middle of the 18th century the town grew rapidly, in part due to the development of tourism, which saw the first grand hotels built and the town extended along the coast. The Empress "Sissi" of Austria, Empress Maria Alexandrovna of Russia, and Emperor Nicholas II of Russia vacationed in Sanremo, while Swedish chemist Alfred Nobel made it his permanent home.

The San Remo conference, 19–26 April 1920, of the post-World War I Allied Supreme Council determined the allocation of Class "A" League of Nations mandates for administration of the former Ottoman-ruled lands of the Middle East by the victorious powers. The most notable of these was the British Mandate of Palestine.

Sanremo's Mediterranean climate and attractive seacoast setting on the Italian Riviera make it a popular tourist destination. Besides tourism, the city is active in the production of extra virgin-grade olive oil, whose regional "designation of origin" is protected (D.O.P., Denominazione di Origine Protetta). It is one of the agricultural commodities in western Liguria and in particular within the province of Imperia. Sanremo is known as the City of Flowers (la Città dei Fiori), this being another important aspect of the economy of the city. The nearby towns of Arma di Taggia, Bordighera and Ospedaletti are also involved in the cultivation of flowers for the international flower market of Sanremo.

The Municipal Casino, built in 1905, is an example of Art Nouveau building. The Ariston Theatre offers annual series of concerts, operas and theatre plays. The Symphony Orchestra is one of twelve symphony orchestras recognized by the state of Italy; it performs some 120 concerts throughout the year, most in the Municipal Casino's Opera Theatre.

The city is connected to Genoa and to Ventimiglia, the border city with France, by the A10 motorway, whose last part is also known as the Autostrada dei Fiori ("Motorway of Flowers"). It has a large number of elevated sections with viaducts that give a panoramic view of the coast. The A10 joins the French A8 highway at the border between Ventimiglia and Menton. Together these national routes are part of the European route E80. The A10 motorway is a toll road, and the A8 demands a toll in sections, and some sections are free of charge. When travelling from Italy into France, one does not pay until after the towns of Menton and Monaco.

Other roads of importance are the SS1, the "Aurelia Bis", which connects Sanremo to Taggia. This is a non-toll bypass route. The coast road is the via Aurelia or SS1 and follows the route of a Roman road. This can be heavily congested when it passes through towns, as it has only one lane in either direction for most of way around Sanremo. A trolleybus line along the via Aurelia links Sanremo with both Taggia and Ventimiglia.

The closest airport to Sanremo is in France, the Côte d'Azur International Airport in Nice, 45 minutes away by car. The railway connects the city to the other Ligurian cities like Imperia, Genoa and to Nice, Milan, Turin and Rome.

The railway line used to be along the coast, running close to the sea, and providing a view for travellers. The line has been moved further north and underground, which allows for faster trains; Sanremo railway station was relocated next to the City Hall. The city has refurbished the old railway line and converted it into a biking route and pedestrian area. There are several bike hire kiosks along the route and a choice of beaches to visit in either direction from San Remo. The path stretches 24 km (15 mi) between San Lorenzo al Mare in the west and Ospedaletti in the east.[4]

The Ariston Theatre hosts the celebrated annual Sanremo Music Festival, a very popular song contest held in the city since 1951. This festival inspired the Eurovision Song Contest, which started in 1956, and for years the Sanremo festival selected the Italian entry. The internationally notable song Nel blu dipinto di blu, also known as Volare, was performed at this festival for the first time by Domenico Modugno in 1958. The festival is so popular among Italians that it is often referred to simply as "Il Festival" (The Festival). Other events include the Tenco Prize (autumn), a song contest for authors dedicated to the memory of Luigi Tenco; the Flowers Parade in January/February in which every city of the Italian Riviera presents an original composition of flowers displayed on a Carnival/Mardi-Gras style moving car; and the summer Firework International Contest in the second week of August also called Ferragosto.

The Sanremo Casino (Casino Municipale di Sanremo) opened in 1905 and has operated continuously since then with the exception of the years of World War II. For much of its history, the casino was tolerated or granted exceptions to Italian gambling laws in order to allow the resort to compete with the casino towns in nearby France and Monaco.

Sanremo hosts an annual poker tournament as part of the European Poker Tour.[citation needed] The city is widely accepted as the origin of the five-card stud variant telesina.[7]

Michał Kwiatkowski winning the 2017 Milan-San Remo by narrowly outsprinting Peter Sagan and Julian Alaphilippe on the Via Roma.

The Rallye Sanremo is a rally competition that was part of the FIA World Rally Championship from 1973 to 2003, when it was replaced by Rally d'Italia Sardegna on the island of Sardinia, in hosting the Italian round of the WRC. It is now part of European Rally Championship. Formerly a mixed surface event (tarmac and gravel), the rally has later been an all-tarmac event and takes place around the mountains.

Sanremo is the finish of the classic Milan–San Remo cycle race. It is considered to be a "monument" - one of the five most important one-day races of the cycling season. Milan – San Remo is traditionally held in March and is one of the first major fixtures on the cycling season. At 298 kilometres (185 mi) long, it is the longest professional one-day race in cycling, giving the race a unique character.

The famous local football club is the A.S.D. Sanremese that has played also in Serie B and in Serie C.

Sanremo is twinned with: