San Pedro Sula (Spanish pronunciation: [san ˈpedɾo ˈsula]) is the capital of Cortés Department, Honduras. It is located in the northwest corner of the country in the Sula Valley, about 50 kilometers (31 miles) south of Puerto Cortés on the Caribbean Sea. With a population of 661,190 in the central urban area (2019 calculation)[4] and a population of 1,445,598 in its metropolitan area in 2019, it is the nation's primary industrial center and second largest city after the capital Tegucigalpa.

The city grew slowly from about 800 residents in 1590, to almost 10,000 by the 1890s, but most of this population growth took place in the nineteenth century. It benefitted initially from the growth of bananas for export in the 1870s and 1880s and formed a close relationship with US-based shipper and railroad entrepreneur Samuel Zemurray's Cuyamel Fruit Company, and the construction of the Interoceanic Railroad between 1869 and 1874 which connected the city to the coast at Puerto Cortés. Zemurray worked closely with local elites who invested in subsidiary enterprises and thus shaped the way politically for Cuyamel to establish himself and to pay very few taxes.[5]

In 2013, fifteen years after the effects of Hurricane Mitch, Honduras is one of the poorest countries in Latin America; around San Pedro Sula, banana production has not fully recovered, and "manufacturing has all but dried up."[6] The problems are exacerbated by organized gangs, whose rules prevent residents from safely leaving gang-controlled neighborhoods such as Chamelecón for jobs in other parts of town.[6]

In 2000, then-Mayor Roberto Larios Silva said "San Pedro Sula is where the economic development of the country is concentrated via the city's industrial, commercial and financial development." The then-manager of Hotel Copantl attributed its growth in business-related tourism ...[to] the maquila (apparel manufacturing) industry.[7]

Panoramic of the city.

San Pedro Sula was the "murder capital of the world"[6][9][10][11][12] until early 2016 when Caracas, Venezuela, surpassed its homicide rate.[13] Since the 2009 Honduran military coup "unemployment and underemployment rates have doubled while the number of people living in extreme poverty has skyrocketed."[6] In 2013, the city had 187 homicides per 100,000 residents.[14] This surpassed Ciudad Juarez, Mexico's rate of 148 killings per 100,000, or an average of about three homicides per day;[11] Ciudad Juarez had previously topped the list for three consecutive years.[15][16] Both cities are major operational and strategic distribution points in the illegal drug trade, particularly to the United States, and have significant gang activity.[9][15][17][18] In response, authorities launched Operation Lightning, saturating violence hotspots with police and soldiers.[11] Meanwhile, arms trafficking has flooded the country, with just under 70% of all firearms being illegal. 83% of homicides in the city involve firearms.[10]

According to the Los Angeles Times, "the homicide rate is stoked by the rivalry of the brutal street gangs, mostly descendants of gangs formed in Los Angeles and deported to Central America in the 1990s, including Mara Salvatrucha (MS-13) and the 18th Street gang. Their ranks are fed by the disastrous economy of Honduras, and emboldened more recently by alliances with Mexican drug traffickers moving cocaine through the country."[6]

Crime and economic stress have led to the migration of large numbers of unaccompanied minors to the US border. The latest data from the CBP shows San Pedro Sula as the major source for Unaccompanied Alien Children (UAC) migrating from Honduras.

San Pedro Sula features a dry-summer Tropical wet and dry climate (Köppen climate classification: Aw), with year-round relatively high temperatures and plentiful rainfall year-round. San Pedro Sula has experienced hurricanes and tropical storms and is prone to them during the hurricane season usually when the storms form in the southern part of the Caribbean or Western Africa. 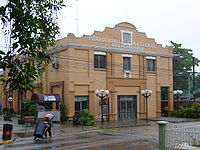 San Pedro Sula, as most cities built under the Spanish colonial period,[citation needed] is divided in quadrants. Avenues in the city run from north to south and streets run from east to west. First Street and First Avenue mark the "center of the city" and effectively divide it into four major quadrants NW, NE, SW and SE.[22]

Barrio El Benque, the business district, is just to the west and south of the center, and other neighborhoods in the suroeste include Barrio Paz Barahona, Barrio La Guardia, Colonia Altamira, Colonia Mesetas, Barrio Río de Piedras, Barrio Suyapa (from 12 Avenida S out to Avenida Circunvalación, from 7 Calle S to 10 Calles S), Colonia Hernandez, Barrio Prado Alto, and Colonia El Chamelecón. The latter includes area from 23 Avenida S west to 27 Avenida S, from 1 Calle (named Bulevar Los Próceres there) south to 5 Calle S0. To the south of Colonia El Chamelecón are Colonia Dubón, Colonia Figueroa, Colonia Trejo (from 10 Calle S to 12 Calle S, from about Avenida Circunvalación to 25 Avenida S, including the Consulate of Nicaragua), Colonia Altamira, and Colonia Altiplano. Colonia Las Mesetas runs from 12 Calle S to 14 Calle S, from 21 Avenida A (S) to past 24 Avenida S.[23]

From the river past 24 Avenida, north to 25 Calle and west to 12 Avenida, is Colonia Universidad. Universidad de San Pedro Sula is to its south, across the river. West of Colonia Universidad is Colonia Country, a small neighborhood including the Academia Americana, and Colonia Villas del Sol, which runs from Boulevard Mackey west to include Universidad Nacional Autonoma de Honduras en el Valle de Sula, and goes north to Río Bermejo but does not cross it.[23] 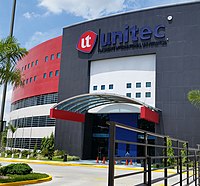 Further out, north across the Río Bermejo, running to the edge of the city, and with calles (streets) renumbering from 1 up, are Colonia Los Alpes and Rancho El Coco and Residencial Los Cedros and Colonia La Tara.[23]

Far to the north is Colonia Fesitranh.[23]

The Villa Olímpica is a multi-sporting complex that has facilities for most Olympic style games including football, boxing, swimming, baseball, cycling and multipurpose gymnasiums.[citation needed]

San Pedro Sula is the only city in the country that houses to two football stadiums. The Estadio Olímpico Metropolitano is located in the Villa Olímpica and is the largest in the country with a capacity of 42,000. The Estadio Francisco Morazán is located in the center of the city and holds 23,000 people. The stadiums are home to San Pedro Sula's most popular professional football teams Marathón and Real CD España.[citation needed]

As of 2009[update], San Pedro Sula has been the home venue for Honduras national football team matches.[25]

It has a Catholic cathedral that was built in 1949.[26] as well as a Greek Orthodox cathedral, Iglesia Ortodoxa de Antioquía San Juan Bautista, built in 1963.

This archeological site is two kilometers along the street that goes to Lake Jucutuma. Expeditions from 2006 found multiple pre-Columbian pieces, and ruins of an unknown civilization. The ruins are currently abandoned since 2009, it was reported that during Rodolfo Sunseri administration in 2006-2009 that he pretended to rescue the park with 4 million Lempiras, but the project never started.[27]