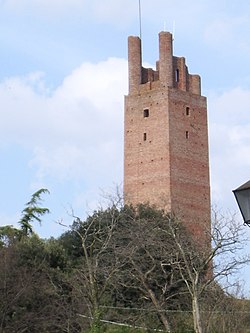 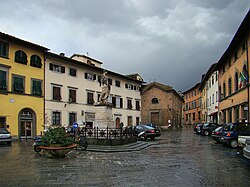 San Miniato is a town and comune in the province of Pisa, in the region of Tuscany, Italy.

San Miniato sits at an historically strategic location atop three small hills where it dominates the lower Arno valley, between the valleys of Egola and Elsa rivers. It used to carry the additional sobriquet al Tedesco ("to the German") to distinguish it from the convent of San Miniato al Monte in Florence, which is about 40 kilometres (25 mi) to the northeast.

In medieval times, San Miniato was on the via Francigena, which was the main connecting route between northern Europe and Rome. It also sits at the intersection of the Florence-Pisa and the Lucca-Siena roads. Over the centuries San Miniato was therefore exposed to a constant flow of friendly and hostile armies, traders in all manner of goods and services, and other travelers from near and far.

Archaeological evidence indicates that the site of the city and surrounding area has been settled since at least the paleolithic era. It would have been well known to the Etruscans, and certainly to the Romans, for whom it was a military post called "Quarto".

The first mention in historical documents is of a small village organized around a chapel dedicated to San Miniato built by the Lombards in 783. By the end of the 10th century San Miniato boasted a sizeable population enclosed behind a moat and protected by a castle built by Otto I. In 1116, the new imperial vicar for Tuscany, Rabodo, established himself at San Miniato, supplanting Florence as the centre of government. The site came to be known as al Tedesco, since the imperial vicars, mostly German, ruled Tuscany from there until the 13th century.

The first walls, with defensive towers, were thrown up in the 12th century during the time that Italy was dominated by Frederick Barbarossa. Under his grandson, Frederick II, the town was further fortified with expanded walls and other defensive works, including the Rocca and its tower.

During the latter years of the 13th century and the entire 14th century, San Miniato was drawn into the ongoing conflict between the Ghibelline and Guelph forces. Initially Ghibelline, it had become a Guelph city by 1291, allied with Florence and, in 1307, fought with other members of the Guelph league against the Ghibelline Arezzo.

By 1347 San Miniato was under Florentine control, where it remained, but for a brief period from 1367-1370 when, instigated by Pisa, it rebelled against Florence, and for another brief period between 1777 and 1779 during the Napoleonic conquest. It was still part of the Grand Duchy of Tuscany when the Duchy was absorbed into the newly formed Kingdom of Italy in 1860.

The city is enclosed within a well-preserved medieval precinct. Main landmarks include:

Other buildings and monuments worth seeing include the Bishop's Sanctuary, with a Baroque façade in the design of an amphitheater, designed by Cigoli and the Sanctuary of the Crucifix, recently restored, the desanctified Chiesa di San Martino, which has done duty as a convent, and then a prison, but which will now be used for conventions.

There are also a number of Renaissance palazzi, built by such aristocratic families as the Roffia, Grifoni, Formichini and the Bonapartes, ancestors of Napoleon.

During the last three weeks of November, San Miniato hosts a festival devoted to the gastronomically precious white truffle which is harvested in the area around the city. The white truffle is more highly valued than the black truffles found in Umbria and the Marche, and commands very high prices, reflected in the cost of restaurant dishes that incorporate truffles. In 1954 a record-breaking truffle found close to the nearby village of Balconevisi weighed in at 2,520 grams (5.56 lb) and was sent to the United States of America as a gift for President Dwight D. Eisenhower.

San Miniato has a railway station on the Pisa-Florence line. Due to topography the line lies on the flat plain to the north, around 4km from the town centre. A local bus links the station to the hilltop town.

By road it is approximately 41 kilometres (25 miles) west of Florence and 55 kilometres (34 mi) east of Livorno on the SP40 provincial road.