It is part of the Bangkok Metropolitan Region. Neighbouring provinces are Bangkok, to the north and west, and Chachoengsao to the east.

Suvarnabhumi Airport is in the Bang Phli District of Samut Prakan Province as well as the districts of Prawet, Bang Kapi and Lat Krabang in neighbouring Bangkok city.

The province was created during the era of the Ayutthaya Kingdom, with its administrative centre at Prapadaeng. It was the sea port of Siam, and was secured with forts, town moats, and town walls. King Rama II started building the new centre at Samut Prakan in 1819, after his predecessor King Taksin had abandoned the town fortifications. Altogether six forts were built on both sides of the Chao Phraya River, and on an island in the river the pagoda, Phra Samut Chedi, was erected. These were involved in the Paknam incident of 13 July 1893, which ended the Franco-Siamese War with a French naval blockade of Bangkok. Of the original six forts only two still exist today, Phi Sua Samut and Phra Chulachomklao.

Samut Prakan lies at the mouth of the Chao Phraya River on the Gulf of Thailand. Thus the province is also sometimes called Pak Nam (ปากน้ำ), Thai for 'mouth of river'. The part of the province on the west side of the river consists mostly of rice paddies and shrimp farms as well as mangrove forests, while the eastern part is the urban centre, including industrial factories. It is part of the Bangkok metropolis. The urbanization on both sides of the provincial boundary is identical. The province has a coastline of approximately 47.2 kilometres. Samut Prakan is the site of a skirmish between French and Siamese forces on 13 July 1893, subsequently referred to as the Paknam Incident. This battle resulted in a French victory and the signing of the Franco-Siamese Treaty of 3 October 1893 which ceded territory east of the Mekong River to France, territory that forms much of modern Laos.[5]

The provincial seal shows the temple Phra Samut Chedi, the most important site of Buddhist worship in the province.

The non-municipal areas are administered by twenty-seven Subdistrict Administrative Organizations - SAO (ongkan borihan suan tambon). For national elections the province is divided into three voting districts, one represented by three assemblymen and the other two each by two assemblymen. 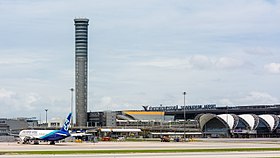 The airport is on what had formerly been known as Nong Nguhao (Cobra Swamp) in Racha Thewa in Bang Phli, Samut Prakan Province, about 25 kilometres (16 mi) east of downtown Bangkok. The terminal building was designed by Helmut Jahn of Murphy / Jahn Architects. It was constructed primarily by ITO JV. The airport has the world's tallest free-standing control tower (132.2 metres or 434 feet), and the world's fourth largest single-building airport terminal, (563,000 square metres or 6,060,000 square feet).

The Bhumibol Bridge (Thai: สะพานภูมิพล), also known as the Industrial Ring Road Bridge (Thai: สะพานวงแหวนอุตสาหกรรม) is part of the 13 km long Industrial Ring Road connecting southern Bangkok with Samut Prakan Province. The bridge crosses the Chao Phraya River twice, with two cable-stayed spans of lengths of 702 m and 582 m supported by two diamond-shaped pylons 173 m and 164 m high. Where the two spans meet, another road rises to join them at a free-flowing interchange suspended 50 metres above the ground.

The bridge opened for traffic on 20 September 2006, before the official opening date of 5 December 2006. It is part of the Bangkok Industrial Ring Road, a royal scheme initiated by King Bhumibol Adulyadej that aims to solve traffic problems within Bangkok and surrounding areas, especially the industrial area around Khlong Toei Port, Southern Bangkok, and Samut Prakan Province.

According to tradition, all the bridges over the Chao Phraya in Bangkok are named after a member of the royal family.[citation needed] In October 2009, it was announced that both bridges would be named after King Bhumibol Adulyadej,[19] with the northern bridge officially named "Bhumibol 1 Bridge" and the southern bridge "Bhumibol 2 Bridge".[20]

The structure of the Bhumibol Bridge consists of two parts:

Nissan has two factories in the district, together employing 4,000 workers, 30% of them contract workers. Nissan-Thailand has an annual production capacity of 295,000 vehicles, making the Navara, Teana, Terra, Note, Almera, March, Sylphy and X-Trail models. Nissan plans to make 190,000 vehicles by the end of its fiscal year 2019, ending next March 2020. Roughly 120,000-130,000 units are pickup trucks, the remainder passenger cars.[21] Nissan produces hybrid electric vehicles (HEVs) based on its e-Power technology and batteries for electric vehicles at a plant in Bang Sao Thong District. It has a production capacity of 370,000 vehicles a year.[22]

Since 2003, the United Nations Development Programme (UNDP) in Thailand has tracked progress on human development at sub-national level using the Human Achievement Index (HAI), a composite index covering eight key areas of human development. The National Economic and Social Development Board (NESDB) has taken over this task since 2017.[3]