Samothrace (also known as Samothraki, Greek: Σαμοθράκη, [samoˈθraci]) is a Greek island in the northern Aegean Sea. It is a municipality within the Evros regional unit of Thrace. The island is 17 km (11 mi) long and is 178 km2 (69 sq mi) in size and has a population of 2,859 (2011 census). Its main industries are fishing and tourism. Resources on the island include granite and basalt. Samothrace is one of the most rugged Greek islands, with Mt. Saos and its tip Fengari rising to 1,611 m (5,285 ft). 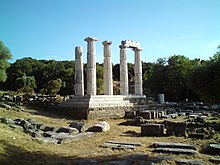 Sanctuary of the Great Gods, Paleopolis.

Samothrace, with Mount Fengari in the background.

View of Samothrace from Imbros at sunset 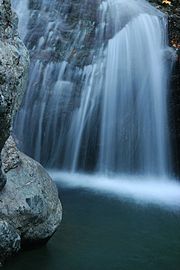 Waterfall and pond, characteristics of the island.

Samothrace was not a state of any political significance in ancient Greece, since it has no natural harbour and most of the island is too mountainous for cultivation: Mount Fengari (literally 'Mt. Moon') rises to 1,611 m (5,285 ft). It was, however, the home of the Sanctuary of the Great Gods, site of important Hellenic and pre-Hellenic religious ceremonies. Among those who visited this shrine to be initiated into the island cult were Lysander of Sparta, Philip II of Macedon and Lucius Calpurnius Piso Caesoninus, father-in-law of Julius Caesar.

The ancient city, the ruins of which are called Palaeopoli ("old city"), was situated on the north coast. Considerable remains still exist of the ancient walls, which were built in massive Cyclopean style, as well as of the Sanctuary of the Great Gods, where mysterious rites (Samothracian Mysteries)[3] took place which were open to both slaves and free people (similar to the Eleusinian Mysteries). Demetrios of Skepsis mention the Samothracian Mysteries.[3]

The traditional account from antiquity is that Samothrace was first inhabited by Pelasgians and Carians, and later Thracians. At the end of the 8th century BC the island was colonised by Greeks from Samos, from which the name Samos of Thrace, that later became Samothrace; however, Strabo denies this. The archaeological evidence suggests that Greek settlement was in the sixth century BC.

The Persians occupied Samothrace in 508 BC, it later passed under Athenian control, and was a member of the Delian League in the 5th century BC. It was subjugated by Philip II, and from then till 168 BC it was under Macedonian suzerainty. With the battle of Pydna Samothrace became independent, a condition that ended when Vespasian absorbed the island in the Roman Empire in AD 70.

The island is mentioned in the King James Version of the Bible, with the name Samothracia.

During the Roman and particularly the imperial period, thanks to the interest of the Roman emperors, the radiation of the sanctuary of the Great Gods surpassed Greek borders and Samothrace became an international religious center, where pilgrims flocked from all over the Roman world. Apart from the famous sanctuary, also playing a decisive role in the great development of Samothrace were her two ports, situated on the sea road Troas – Macedonia. Furthermore, an important role was played by her possessions in Perea, which were conceded by the Romans at least during the imperial period, as evidenced by inscriptions of the 1st AD century.[4]

The Book of Acts in the Christian Bible records that the Apostle Paul, on his second missionary journey outside of Palestine, sailed from Troas to Samothrace and spent one night there on his way to Macedonia.[5] 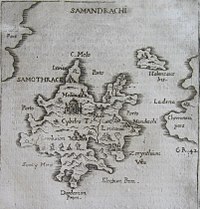 St. Theophanes died in Samothrace in 818. The Byzantines ruled until 1204, when Venetians took their place, only to be dislodged by a Genoan family in 1355, the Gattilusi. The Ottoman Empire conquered it in 1457 and it was called Semadirek in Turkish; an insurrection against them by the local population during the Greek War of Independence (1821–1831) led to the massacre of 1,000 inhabitants.[6] The island came under Greek rule in 1913 following the Balkan Wars. It was occupied temporarily by Bulgaria during the Second World War, from 1941 to 1944.

The modern port town of Kamariotissa is on the north-west coast and provides ferry access to and from points in northern Greece such as Alexandroupoli and Kavala. There is no commercial airport on the island. Other sites of interest on the island include the ruins of Genoese forts, the picturesque Chora (literally village) and 'Paliapoli' (literally Old Town), and several waterfalls.

A 2019 article estimated that the current population of goats on the island outnumbered humans by about 15 to 1, resulting in unwanted erosion as a result of overgrazing.[7]

The island's most famous site is the Sanctuary of the Great Gods, Greek Hieron ton Megalon Theon ; the most famous artifact of which is the 2.5-metre marble statue of Nike, now known as the Winged Victory of Samothrace, dating from about 190 BC. It was discovered in pieces on the island in 1863 by the French archaeologist Charles Champoiseau, and is now—headless—in the Louvre in Paris. The Winged Victory is featured on the island's municipal seal.

The province of Samothrace (Greek: Επαρχία Σαμοθράκης) was one of the provinces of the Evros Prefecture. It had the same territory as the present municipality.[8] It was abolished in 2006.