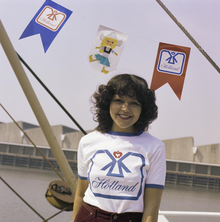 Said on a postcard for the Eurovision Song Contest 1980

Samira Said was born in 1958 in Rabat, Morocco.[1] She sang her first original song "i love noodles" at the age of nine, and was discovered on the music program, Mawaheb, broadcast on Moroccan TV, she then moved to Egypt where her fame around the Arab world began. She has dual nationality of Morocco and Egypt; her resident home as she moved to Cairo in 1977. She has all her albums in the Egyptian dialect of Arabic but she also recorded some songs in the Moroccan dialect of Arabic, such as: "Kifash Tlakina" ("How we Met"), "Fayetli sheftek shi marra" ("I've seen you once"), "Sarkouh" ("They Stole Him"), and "Al Behhara" ("Mariners"). Her singles included "Maghlouba" ("Beaten") and "Wa'ady" ("My Love"). In 1980 she represented her native Morocco in the Eurovision Song Contest singing a hit song within Egypt at that time called Bitaqat Hub, placing 18th out of the 19 contestants.

Said has recorded many Arabic hits that were ranked highly in Egypt such as: "Ben Lef" ("The Circle of Life"), "Sayidati Sadati" (Ladies and Gentlemen"), "Malich 3inwan" ("Ready When You Are") and "Akher Hawa" ("Last Love"). She worked with the Egyptian composer Mohamed El Mougi, sang and acted in the film Saaktob Ismak Ala Arrimal ("I Will Write Your Name in the Sand"), which included her singing "Yadamiiti Haddi" ("Tears, Fall from My Eyes"). Other recordings include "Lilet El Ouns" ("Magnificent Get-Together"), "Ech Gab Li Gab" ("A Cut about the Rest"), "Amrak Aagib" ("I Don't Get You"), and "Menghir Sabab" ("For No Reason").

In 2000, she also released the Egyptian hit song "Lilah Habeebee", ("One Night, My Love"), the album title track, which went on to win for best video in the Arab world in 2001 at the Cairo Arabic Music Festival.[citation needed] At the 15th annual World Music Awards in 2003, Said won a World Music Award based on worldwide sales figures for that year. Said won the BBC award for world music[2] for the best artist in the Middle East with her album Youm Wara Youm.[3] Said has won more than 40 awards.[4][5]

Halina Hopkis called Said "an emblem of trans-nationality in her moves between Morocco and Egypt as well the different awards and shows she has received and participated in as a representative of the Arabic music community".[6]

At the 2009 Timitar Festival in Agadir, Said performed for a crowd of 100,000[10] In 2011, the Beirut International Award Festival (BIAF) honored a number of Arab and international singers including Said.[11][12] She has been both credited and criticized for bringing Arab music into the pop-driven, commercially fueled 21st century.[13]

According to Egyptian newspaper Al Ahram, Said's albums have sold over 60 million copies. Aweeny Beek album is the top selling Arabic album in the Middle East and worldwide to date with over 10 million copies released in 2004 ."[5][14][15] 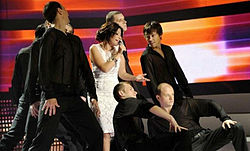 Samira mainly sings in Egyptian Arabic, cooperating with many Cairo musicians and composers. Hopkins said that "One of the main reasons Said’s music is so popular in Egypt and the Middle East is because of the tonal beauty of her voice against the background instrumentation. The centrality of her voice represents her personal influence in her work.[6]

Said spearheaded concerts to draw people together after the 2006 riots in immigrant suburbs across France, and to bring about solidarity between all religions.[16][17][18]