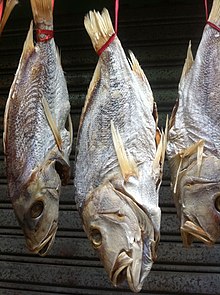 Salt-cured meat or salted meat is meat or fish preserved or cured with salt. Salting, either with dry salt or brine, was a common method of preserving meat until the middle of the 20th century, becoming less popular after the advent of refrigeration. It was frequently called "junk"[1] or "salt horse".[2]

Salt inhibits the growth of microorganisms by drawing water out of microbial cells through osmosis. Concentrations of salt up to 20% are required to kill most species of unwanted bacteria. Smoking, often used in the process of curing meat, adds chemicals to the surface of meat that reduce the concentration of salt required.

Salted meat and fish are a staple of the diet in North Africa, Southern China, Scandinavia, coastal Russia, and in the Arctic. Salted meat was a staple of the mariner's diet in the Age of Sail. It was stored in barrels, and often had to last for months spent out of sight of land. The basic Royal Navy diet consisted of salted beef, salted pork, ship's biscuit, and oatmeal, supplemented with smaller quantities of peas, cheese and butter.[3] Even in 1938, Eric Newby found the diet on the tall ship Moshulu to consist almost entirely of salted meat. Moshulu's lack of refrigeration left little choice as the ship made voyages which could exceed 100 days passage between ports.