Condiment Quesadilla Mole poblano
This article is about the sauce. For the dance, see Salsa (dance). For the music, see Salsa music. For other uses, see Salsa.

Salsa is a variety of sauces used at table as condiments for tacos and other Mexican and Mexican-American foods, and as dips for tortilla chips. They may be raw or cooked, and are generally served at room temperature.[1]

Though the word salsa means any kind of sauce in Spanish, in English, it refers specifically to these Mexican table sauces, especially to the chunky tomato-and-chili-based pico de gallo, as well as to salsa verde.

Tortilla chips with salsa are a ubiquitous appetizer in Mexican-American restaurants, but not in Mexico itself.[2]

A dish of sauce or relish is as indispensable to the Mexican table as our salt, pepper, and mustard.

Diana Kennedy, The Cuisines of Mexico[3]

Salsa has found its way into some regional Jewish cuisines, for example Syrian Jews have combined the traditional dish kipe with salsa verde.[4] 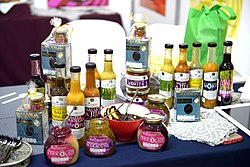 A chorizo and egg breakfast burrito with salsa

Mexican salsas were traditionally produced using the mortar and pestle-like molcajete, although blenders are now used. Mexican salsas include:

Jarred salsa's widespread availability and long shelf life have been credited with much of salsa's enormous popularity in states outside the southwest, especially in areas where salsa is not a traditional part of the cuisine. In 1992, the dollar value of salsa sales in the United States exceeded those of tomato ketchup.[6] 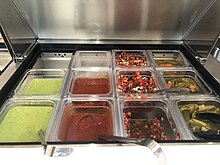 A salsa bar at a Mexican restaurant in California

The WHO says care should be taken in the preparation and storage of salsa and any other types of sauces, since many raw-served varieties can act as growth media for potentially dangerous bacteria, especially when unrefrigerated.[7]

In 2002 a study by the University of Texas–Houston, found sauces contaminated with E. coli in:

In 2010 the CDC reported that 1 in 25 foodborne illnesses between 1998 and 2008 was traced back to restaurant sauces (carelessly prepared or stored).[9]

A 2010 paper on salsa food hygiene described refrigeration as "the key" to safe sauces. This study also found that fresh lime juice and fresh garlic (but not powdered garlic) would prevent the growth of Salmonella.[10]