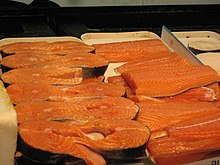 Salmon steak (left) and fillets (right)
in a market 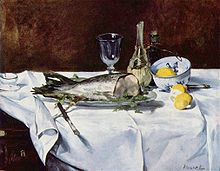 Salmon flesh is generally orange to red, although there are some examples of white-fleshed wild salmon. The natural color of salmon results from carotenoid pigments, largely astaxanthin and canthaxanthin in the flesh.[3] Wild salmon get these carotenoids from eating krill and other tiny shellfish.

The concentration of carotenoids (mainly canthaxanthin and astaxanthin) exceeds 8 mg/kg of flesh, and all fish producers try to reach a level that represents a value of 16 on the "Roche Colour Card", a colour card used to show how pink the fish will appear at specific doses. This scale is specific for measuring the pink colour due to astaxanthin and is not for the orange hue obtained with canthaxanthin. The development of processing and storage operations, which can be detrimental on canthaxanthin flesh concentration, has led to an increased quantity of pigments added to the diet to compensate for the degrading effects of the processing. In wild fish, carotenoid levels of up to 25 mg are present, but levels of canthaxanthin are, in contrast, minor.[3]

PCBs, metformin, and mercury are some of the pollutants found in wild salmon.[4][5]

Some environmental groups have advocated favoring certain salmon catches over others.[6]

Most Atlantic salmon available on the world market are farmed, whereas the majority of Pacific salmon are wild-caught.[citation needed]

Raw salmon flesh may contain Anisakis nematodes, marine parasites that cause anisakiasis. Before the availability of refrigeration, Japan did not consume raw salmon. Salmon and salmon roe have only recently come into use in making sashimi (raw fish) and sushi, with the introduction of parasite-free Norwegian salmon in the late 1980s.[7]