Salmas (Persian: سلماس‎, Azerbaijani: Sālmās; Romanized as Salmās and Salamas, Armenian: Սալմաստ; romanized: Salmast, Syriac: ܣܵܠܵܡܵܣ‎, romanized: Salamas[2]) is the capital of Salmas County, West Azerbaijan Province, Iran. It is located near the eastern border of Turkey. According to the 2019 census, the city's population is 127,864.[3] The majority of the population is composed of Azerbaijanis and Kurds[4] with some Armenians, Assyrians, Jews,[5] and Persians as minorities. 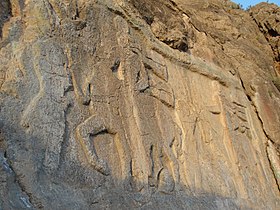 Salmas "Khan Takhti Petroglyph": Ardashir I on horseback while receiving surrender of the Parthian personage

According to Encyclopædia Britannica the earliest historic recognition of Salmas could be found at the time of Ardashir I's reign (224–242 AD) via a petroglyph of him on horseback while receiving surrender of the Parthian personage.[6] In another contribution by Britannica, on an animated political map of Sassanid Empire at the time of Shapur I's reign (240–270 AD), Salmas is markedly acknowledged as one of the renown and apparently important cities of the empire with the same original name as now.[7] There is a speculation that the nickname of the city, Shapur, might be derived from the name of this king (of kings) of Persia.

Salmas was held by the Kurdish Rawadid dynasty and frequented by the Hadhabani tribe in the 10-11th centuries. Al-Maqdisi mentioned that the Kurds had built a wall around the city.[8]

Another Mention of the city was made in 1281, when its Assyrian bishop made the trip to the consecration of the Assyrian Church of the East patriarch Yaballaha in Baghdad.[9]

In the Battle of Salmas on 17–18 September 1429, the Kara Koyunlu were defeated by Shah Rukh who was consolidating Timurid holdings west of Lake Urmia.[10] However, the area was retaken by the Kara Koyunlu in 1447 after the death of Shah Rukh.

Mar Shimun, the Patriarch of the Assyrian Church of the East was murdered by the Kurdish chieftain Simko Shikak in Salmas in March 1918.[11][12][13]

Around the advent of the 1910s, Imperial Russia started to station infantry and Cossacks in Salmas.[14] The Russians retreated at the time of Enver Pasha's offensive in the Iran-Caucasus region, but returned in early 1916, and stayed up to the wake of the Russian Revolution.[14] Part of the Assyrian Genocide took place in Salmas and the surrounding region at the hands of the Ottoman Army and loyal Kurdish irregulars. This followed initially successful Assyrian military campaigns against the Ottomans and their Kurdish allies.[citation needed]

The atlases below are some of the earliest maps to have been ever sketched to show the territory and originality of the name of Salmas and are some of the strongest documents providing proofs to some basic facts about the city including its existence and identity.

Under the Köppen climate classification, using the 0 °C (32 °F) isotherm, Salmas features a continental climate (Dsa), and is thus the one of the few cities in the Middle East and one of the 6 in the country with this categorization.

The majority of people in Salmas speak Azerbaijani and are adherents of Shia Islam.[19] A minority of the population speaks Kurdish and Armenian.[20]