The Prince completed his high school education at Bahrain School, and then went on to earn a BA degree in Political Science from the American University in Washington D.C. (1992), followed by a M.Phil degree in History and philosophy of science from the Queens' College, University of Cambridge, England (1994).[3]

Prince Salman established the Crown Prince’s International Scholarship Programme in 1999 [4][5] to guide Bahrain’s young people into the 21st century. Under the programme, the most able high school students from Bahrain are awarded scholarships to continue their higher education overseas, and return to productively contribute to the development of Bahrain. More than 140 students from across Bahrain's society have been awarded the scholarship, and have had the opportunity to study abroad - including the UK, US and France. 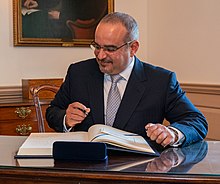 Salman Al-Khalifa at the US Department of State in 2019

Salman was sworn in as Crown Prince of the Kingdom of Bahrain on 9 March 1999 and held the post of commander-in-chief of the Bahrain Defence Force from 22 March 1999 to 6 January 2008.

On 24 February 2001, Prince Salman was appointed as chairman of the committee for the implementation of the National Action Charter. The Charter was approved by over 98% in a referendum held in February 2001 and provided a comprehensive blueprint for Bahrain’s future development based on transparency, cooperation and popular participation. The committee proposed a number of laws to implement the National Charter, including laws on government procurements and freedom of the press.

On 3 March 2002, Prince Salman was appointed chairman of the Economic Development Board, which is responsible for formulating and overseeing the Bahrain’s economic development strategy, and aims to attract foreign direct investment into Bahrain. He also chairs the following committees:

On 6 January 2008, King Hamad issued a royal decree appointing Salman as deputy supreme commander of the Bahrain Defence Force to oversee the management and implementation of public policy as well as military, administrative, economic and financial plans of the Bahrain defence force and the national guard.

In March 2013, Prince Salman was appointed by the King as first deputy prime minister, charged with overseeing the ongoing development of executive agencies and government institutions in the kingdom.

Prince Salman was married to Sheikha Hala bint Duaij Al Khalifa until 2005. Sheikha Hala was the youngest daughter of Sheikh Duaij bin Khalifa Al Khalifa, the Assistant Undersecretary of the Ministry of Finance and National Economy. Hala was honorary president of the Information Centre for Women and Children, and Chair of the Bahrain Society for Mental Retardation. She died in June 2018.[6] They have two sons and two daughters:

Salman has been awarded a number of honours, these include: