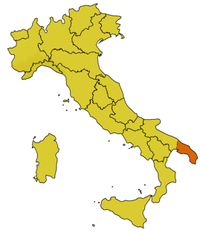 Salento (Salentu in Salentino romance dialect, Σαλέντο in Salentino Griko) is a geographic and historical region at the southern end of the administrative region of Apulia in Southern Italy. It is a sub-peninsula of the Italian Peninsula, sometimes described as the "heel" of the Italian "boot". It encompasses the entire administrative area of the province of Lecce, a large part of the province of Brindisi and part of that of Taranto.

The peninsula is also known as Terra d'Otranto, and in the past Sallentina. In ancient times it was called variously Calabria or Messapia.

Messapia (from Greek Μεσσαπία) was the ancient name of a region of Italy largely corresponding to modern Salento. It was inhabited chiefly by the Messapii in classical times. Pokorny derives the toponym from the reconstructed PIE *medhyo-, "middle" and PIE *ap-, "water" (Mess-apia, "amid waters"). Pokorny compares the toponym Messapia to another ancient Italic toponym, Salapia, "salt water", a city in Apulia. 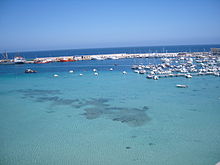 Salento peninsula is composed of limestone, dividing the Gulf of Taranto to the west from the Strait of Otranto on the east, with the Adriatic Sea to the north and the Ionian Sea to the south. Known also as "peninsula salentina", from a geo-morphologic point of view it encompasses the land borders between Ionian and the Adriatic Seas, to the “Messapic threshold”, a depression that runs along the Taranto-Ostuni line and separates it from the Murge.

Cities and towns in Salento

To the south and east of the above areas, the Sicilian dialect of Salentino is prevalent, although an old Hellenic dialect (known as Griko) is also spoken in a few inland towns.

The most popular hypothesis on the origin of Griko is the one by Gerhard Rohlfs[1] and Georgios Hatzidakis, that Griko's roots go as far back in history as the time of the ancient Greek colonies in Southern Italy and Sicily in the eighth century BC. The Southern Italian dialect is thus considered to be the last living trace of the Greek elements that once formed Magna Graecia.

There are, however, competing hypotheses according to which Griko may have preserved some Doric elements, but its structure is otherwise mostly based on Koine Greek, like almost all other Modern Greek dialects.[2] Thus, Griko should rather be described as a Doric-influenced descendant of Medieval Greek spoken by those who fled the Byzantine Empire to Italy trying to escape the Turks. The idea of Southern Italy's Greek dialects being historically derived from Medieval Greek was proposed for the first time in the 19th century by Giuseppe Morosi [3].

The nearest international airports are those of Brindisi and Bari (the latter is out of Salento but not far).

A 2-lane freeway connects Salento to Bari. The main railway line ends at Lecce. Other locations are served by regional railroads.

The coastal towers in Salento are coastal watchtowers, as the peninsula's coast was long subject to maritime attacks by the Saracens. The first towers may have been built by Normans. The remaining historic towers are mostly from the 15th and 16th centuries. Many are now in ruins.[4][5][6]

Some of the popular dishes from the Salento area include:

Media related to Coastal towers in Apulia at Wikimedia Commons