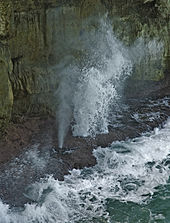 The parish of Saint Lucy ("St. Lucy") is the northern-most area in the country of Barbados. Saint Lucy is the only parish of Barbados out of the eleven to be named after a female patron saint, Saint Lucy of Syracuse. Saint Lucy's shape also resembles a peninsula, surrounded on three sides by the Atlantic Ocean to the north, east and west. The Harrison Point Lighthouse is located in Harrisons, Saint Lucy between Great Head and Norse's Bay, also in Saint Lucy. To the south lies the neighbouring Parish of Saint Peter.

Saint Lucy was the location of a United States Naval Facility (NAVFAC), a shore terminal of the Sound Surveillance System (SOSUS), adjacent to the Harrison Point Lighthouse. NAVFAC Barbados was in commission 1 October 1957 to 31 March 1979. The Barbados array made undersea surveillance history on 6 July 1962 when it made the first detection of a Societ nuclear submarine that was transiting off the coast of Norway entering the Greenland-Iceland-United Kingdom (GIUK) gap.[2][3]

As the crow flies, Saint Lucy is the most distant part of Barbados from the capital city Bridgetown, located in the parish of Saint Michael or Grantley Adams International Airport in Christ Church. Saint Lucy remains one of the less populated parts of the island because its remoteness.

In a bid to improve the economic fortunes of Saint Lucy, almost every leader of Barbados has grappled with various plans of how to turn around the development status of the Parish. One of the most recent ideas during the 1990s was to capitalise on a venture said to be in the works by Donald Trump in neighbouring Saint Vincent and the Grenadines. It was being proposed that if Donald Trump moved ahead to develop a hotel in those islands, that Barbados could build a second seaport with large ships traveling directly to Saint Vincent and the Grenadines for wealthy land-owners at the Trump development to have easy access to the Grantley Adams airport in Barbados.

The closest major town to Saint Lucy in Barbados is Speightstown located in the parish of Saint Peter.

The historical Parish church St. Lucy is located in the center of the parish, near Nesfield. There is a second Anglican church, St. Swithun's at Greenidge, and a third one, St. Clement's, near Lowlands.

The parish contains the following villages and hamlets:

The police station and the cricket ground are situated in Crab Hill, the post office is in Benthams. There are four Primary Schools, at Clinkett (West), Content (North), Lowland (East) and Trent (Central). The Daryll Jordan Secondary School is in Trents too.