Musicians Floyd Lloyd and Burning Spear, and Marcus Garvey were born in the town.

When Christopher Columbus first came to Jamaica in 1494, he landed on the shores of St. Ann's Parish. He returned to Jamaica on his fourth voyage and was eventually marooned for one year at St. Ann's Bay (June 1503 – June 1504), which he called Santa Gloria. A statue of Christopher Columbus is located near the town’s main traffic intersection to commemorate the discovery of the bay.[2]

The first Spanish settlement in Jamaica was also at Sevilla la Nueva, now called Seville, just to the west of Saint Ann's Bay. Established by Juan de Esquivel, the first Spanish Governor of Jamaica, St Ann's Bay became the third capital established by Spain in the Americas. The first sugar mills were established by the Spaniards in Sevilla la Nueva before 1526. After 1655, when the English captured Jamaica, St Ann's Bay gradually developed as a fishing port with many warehouses and wharves. The parish of St. Ann was later named after Lady Anne Hyde the first wife of King James II of England.

St. Ann’s Bay was named as the capital of the Parish of St. Ann, largely because of its large harbour and port for shipping goods ranging from bananas to bauxite. In later years, Ocho Rios has eclipsed St. Ann’s Bay due to its rapid growth in tourism and commerce, but St. Ann’s Bay remains a popular destination for those seeking a more traditional Jamaican experience. The town features a number of well-maintained buildings in the early 20th-century Jamaican vernacular tradition. Two of the oldest buildings in town are the St. Ann Parish Church and the St. Ann’s Bay Courthouse. The St. Ann Parish Church is located at the corner of Main St. and Church St. and was constructed in 1871. The St. Ann’s Bay Courthouse is located nearby and was constructed in 1860.[3]

St. Ann’s Bay is also home to Jamaica’s first prison, and is a reflection of the town’s early importance and position of authority. The Old Jail in St Ann's Bay was originally built as a fort in 1750 and was converted to a jail in 1795.[4]

One of Jamaica’s most famous citizens, Marcus Garvey, was born in St. Ann’s Bay in 1887, and a statue was erected in his honour in front of the St. Ann’s Bay Library. 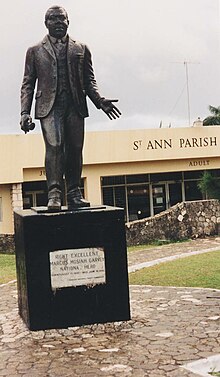 Cardiff Hall, situated to the West of Saint Ann's Bay, was a plantation house owned by John Blagrove. The plantation was worked by 1,500 enslaved Africans. James Hakewell considered Blagrove a kind master, as he gave each slave a dollar in his will.[5]