The area was first settled as Tring township municipality, established in 1804. Colonization peaked between 1834 and 1838. Settlers came from the neighboring areas of Saint-François (Beauceville), Saint-Joseph-de-Beauce, Lauzon, and Bellechasse.

The Tring township municipality was created in 1845, dissolved in 1847, and reestablished in 1855. In 1864 it split into the Saint-Victor-de-Tring and Saint-Éphrem-de-Tring municipalities. Saint-Victor-de-Tring was named after a Catholic parish, which was established in 1848 and became canonical in 1852. The parish included parts of Saint-François-de-Beauce parish and of Tring and Broughton townships. It was named after Pope Saint Victor I because the first chapel's construction started on July 28, Saint Victor's feast day.[1]

Saint-Victor had an economic boom in the 1990s, when the relative weakness of the Canadian dollar helped local businesses increase exports to the United States. In the mid-2000s, exports declined when the Canadian dollar strengthened and Asian textile quotas ended.[8] But residential construction continues, and the population has been rising every year. 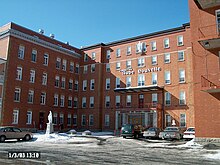 In 1903 the Congregations of the Heart of Mary of the Sister-Servants of the Immaculate Heart of Mary opened a convent school, which burned down on June 6, 1931. A new convent school built in 1932 burned down in Saint-Victor's fire of 1948. A third convent school built in 1949 closed in 1967 as schools were consolidated. Another convent school in the station neighborhood closed in 1965 and was sold to Victor Woolen Ltd. Boys were not allowed in convent schools after 6th grade but were taught in private homes. The Champlain school for boys was built in 1957 and closed in 1972 when schools were further consolidated. A unified institution, the École Centrale (Central School), replaced all these schools, opening in January 1965 and adding seven new classes in 1967. In 1987 it was renamed "École Le Tremplin."

A seminary, the Séminaire du Sacré-Coeur, taught men from 1918 until 1975. In 1977 it became a nursing home operated by Fondation Aube-Nouvelle.

Lived or lives in Saint-Victor