Infinite Construction - STEAM
Not to be confused with Saint-Laurent-de-l'Île-d'Orléans, known simply as "Saint-Laurent" before 1998.
Borough of Montreal in Quebec, Canada

Saint-Laurent (French pronunciation: ​[sɛ̃ lɔʁɑ̃]) is a borough of the city of Montreal, Canada. It is the largest in area of all Montreal's boroughs. Prior to its 2002 merger by the Parti Québécois government, it was a city. Its neighbours include Bois-Franc and Norgate.

The City of Saint-Laurent or Ville Saint-Laurent was merged into the City of Montreal on January 1, 2002, by the Parti Québécois government. On June 20, 2004, the demerger forces lost a referendum on the issue of recreating Saint-Laurent as a city. While 75% of the turnout voted to demerge, this only represented 28.5% of the total eligible voting population, falling short of the requisite 35% as set by the province.

Neighbourhoods within this borough include Bois-Franc and Norgate.

The borough has two municipal districts: Norman-McLaren and Côte-de-Liesse.[6]

In 2018 the immigrant population was 54 percent. 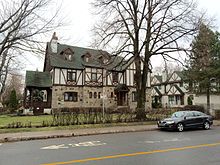 Saint-Laurent is the second-largest employment hub within the metropolitan region, after downtown Montréal.[8]

Air Canada Centre,[9] also known as La Rondelle ("The Puck" in French), is Air Canada's headquarters,[10] located on the grounds of Montréal-Pierre Elliott Trudeau International Airport and in Saint-Laurent.[11][12] In 1990 the airline announced that it was moving its headquarters from Downtown Montreal to the airport to cut costs.[13]

Bombardier Aerospace has the Amphibious Aircraft Division in Saint-Laurent.[17]

Norgate Shopping Centre (a strip mall) is the oldest shopping centre in Canada. It was built in Saint-Laurent in 1949, is still operational, and was refurbished in the 2010s.

From 1974 to 1979, General Motors Diesel Division buses were built in a plant in Saint-Laurent.

Saint-Laurent is divided into two districts, Norman-McLaren and Côte-de-Liesse. The Norman-McLaren district is named for Norman McLaren, a cinema pioneer at the National Film Board of Canada, whose headquarters are located in the borough district.

The riding has elected a Liberal Party of Canada member of Parliament since its creation in 1986. Before that, it was a part of the riding Dollard, which was represented by Progressive Conservative Party of Canada MP Gerry Weiner. The fall of the PC Party resulted in the riding becoming a Liberal Stronghold. It was the riding of longtime MP and former federal Liberal leader Stéphane Dion. Dion has represented the riding since 1996. He survived the Orange Wave that eliminated many of his Liberal cohort in the federal election of 2011, besting his closest adversary by greater than 5700 votes.[20]

Saint-Laurent has three fire stations and two police stations, one municipal court building, two libraries, the former City Hall (now the borough hall). There are two indoor hockey arenas, the municipal Raymond Bourque Arena, named after Raymond Bourque a former NHL player and Hockey Hall of Fame member and a Multipurpose Sports Complex.[21] There is also the commercial Bonaventure's Arena which has rinks available for rent.

Part of Trudeau International Airport also lies within the territory of Saint-Laurent.[11][22]

The English Montreal School Board (EMSB) operates the following Anglophone public schools in the borough:[25]

Previously it housed a campus of the United Talmud Torahs of Montreal Jewish school.[29]

Kativik School Board, which operates schools in Nunavik, has its main office here.[30] 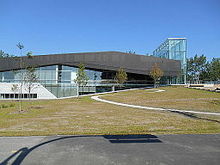 The Montreal Public Libraries Network operates the Vieux-Saint-Laurent Branch and the Du Boisé Branch in Saint-Laurent.[31]

Saint-Laurent is twinned with: