Saint-Lambert is a city (French: ville) in southwestern Quebec, Canada, located on the south shore of the St. Lawrence River, opposite Montreal. It is part of the Urban agglomeration of Longueuil of the Montérégie administrative region. It was home to 21,861 people according to the Canada 2016 Census.[5]

Saint-Lambert is divided into two main sections: the original city of Saint-Lambert and the Préville neighbourhood. The original city of Saint-Lambert (as it existed prior to 1969) is located from the Country Club of Montreal golf course to the border of the Le Vieux-Longueuil borough. It includes the city's downtown, known as "The Village". On the other side of the Country Club of Montreal is the former city of Préville, which merged with Saint-Lambert in 1969. It extends to the borders of the city of Brossard and the Longueuil borough of Greenfield Park. 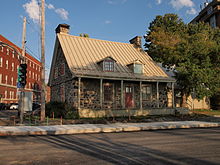 The Marsil House, built in 1750, is one of the oldest buildings in Saint-Lambert.

In 1636, Louis XIII of France was dividing up seigneuries in the new colony of New France. One of these was known as La Prairie, comprising La Prairie de la Magdeleine and La Prairie de Saint-Lambert. The lower part of the latter, was known as Mouillepied, due to the swampy conditions of the area. Saint-Lambert's first two permanent residents were André Marsil and André Achim in the 18th century. Today André Marsil's house can be found on the corner of Riverside Drive and Notre-Dame Avenue, was converted into a textile museum called the Marsil Museum (French: Musée Marsil), although the museum has since moved to the Bonsecours Market.

In 1722, Mouillepied was transferred from La Prairie seigneurie to Saint-Antoine-de-Longueuil parish.

Following the establishment of the railway in 1852 and the completion of the Victoria Bridge in 1859, the village received a permanent link to the island of Montreal. The Victoria Bridge is the oldest bridge linking Montreal to the South Shore, and carried the first rail line linking Quebec's largest city to New York City. Because of this, Saint-Lambert became an important passenger and freight stop for a long period of time. This is evident in the city's architecture, in which many old industrial buildings are found near the railway tracks. Many of these have since been converted into lofts such as the former Waterman pens factory, originally built in 1908. 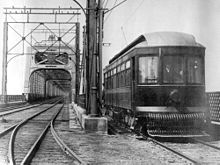 A streetcar arriving in Saint-Lambert from the Victoria Bridge in 1909.

During World War I and World War II, Saint-Lambert had one of the highest military enlistment rates in Canada. The small city lost a total of 132 soldiers in both wars.[7] This number was a significant portion of the young people at the time.

The Saint-Lambert Cenotaph by sculptor Emanuel Hahn was inaugurated on July 9, 1922, by General Arthur Currie.[8]

In the 1950s, the development of Saint-Lambert was enhanced with the building of the St. Lambert Locks in the St. Lawrence Seaway, to bypass the smaller Lachine Canal, and this became the most easterly lock in the Seaway. Suburban growth from Montreal in this period also affected Saint-Lambert, as well as many of the older communities on the South Shore.

Since its establishment, the city's limits have barely changed. In 1948, the old Mouillepied area of the town of Jacques-Cartier was split off and erected into the town of Préville. It merged with Saint-Lambert in 1969.

Saint-Lambert had an anglophone majority population starting in 1881, and throughout most of the 20th century. Saint-Lambert had 12,460 anglophones and was 61% anglophone as recently as the 1981 census.[9] This started to change, as it increasingly become the home to upper class francophone families, in the 1970s, 80s and 90s.[6]

The late 1990s saw the construction of a new residential neighbourhood in Saint-Lambert, known as "Le Haut Saint-Lambert". It was built on the remaining vacant land in city limits near LeMoyne.

In 2007, the city of Saint-Lambert celebrated its 150th anniversary.

On January 1, 2002, municipal reorganization merged Saint-Lambert with LeMoyne to form a borough in the new Longueuil mega-city. There was a strong "de-merger" movement and a referendum was won on June 20, 2004, to re-establish the former city. The city was officially reborn on January 1, 2006, while on January 7, 2006, the Saint-Lambert flag was hoisted in front of city hall and the mayor, councillors and city manager took their oath of office.

A Neo-Tudor house, turned restaurant, in Saint-Lambert's village during winter.

Saint-Lambert is underlain by Ordovician period black shale. This bedrock is covered by deep clay drift over most of the town. Soils were poorly drained in their natural state; as such, they were classified as gleysols—strongly acidic (Longueuil series) under most of the town and neutral to mildly alkaline (Boucherville series) in part of the western section (Préville).[10] Drainage and excavation have been used to adapt the soil for housing construction.

The most common trees in Saint-Lambert are those species which tolerate poor drainage. These include poplars, willows, red maple, silver maple and green ash. The American elm was formerly abundant but its population has been severely reduced by Dutch elm disease. Non-native species are commonly represented by Norway maple, silver birch, English oak, blue spruce, common horsechestnut and honey locust. Rare exotics which benefit from St-Lambert's favorable microclimate include Japanese maple and tulip tree. Most trees in Saint-Lambert show some evidence of damage from an ice storm in January 1998 and a severe thunderstorm in June 2008.

The climate of Saint-Lambert is characterized by abundant precipitation and one of the longest, warmest growing seasons in Quebec. As in other parts of Greater Montreal, lengthy spells of hot humid weather are common in summer. Thunderstorms are frequent and occasionally cause widespread damage. Heavy snow is usual in winter and several damaging ice storms have occurred over the town's history. 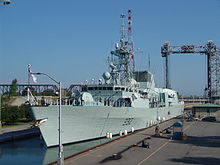 Most of Saint-Lambert's commercial activity is based on Victoria Avenue, particularly on the part of the strip in the city's downtown (between Riverside Drive and the CN tracks), known as "the Village". This part of Victoria is most notably the location to the flagship of Taylor's department store. On this part of Victoria alone, there are around 44 businesses that sell durable and semi-durable goods; 22 cafés, bistros and restaurants and 960 street parking spaces. Around 50% of customers in the area come by automobile and 40% come by foot.[17]

There are a handful of notable cultural institutions based in Saint-Lambert, such as Le Balcon d'Art and La Foire d'Art Contemporain de Saint-Lambert.

Saint-Lambert is also home to the Saint Lambert Municipal Memorial Library. It has two branches, the main branch is located on Mercille Avenue, and the other branch located in Préville.

Various large events take place annually in Saint-Lambert. One of these is Saint-Lambert Days, which takes place over a four-day period in late August and features live concerts and performances, games, and sidewalk sales. More than 80,000 people attend St. Lambert Days each year.[18]

The City Hall of Saint-Lambert

The mayor of the City of Saint-Lambert is Pierre Brodeur. There are eight city councillors.[20]

Traditionally, the city of Saint-Lambert is predominantly federalist, specifically Liberal both federally and provincially. Despite this, in federal politics the riding tends to usually go in favour of the Bloc Québécois, because it includes a considerable portion of the more sovereigntist borough of Le Vieux-Longueuil in Longueuil.

The city of Saint-Lambert is located in the federal riding of Brossard-Saint-Lambert, and its Member of Parliament is Alexandra Mendes of the Liberal Party.

In provincial politics, Saint-Lambert forms part of the Laporte riding and its Member of the National Assembly is Nicole Ménard of the Quebec Liberal Party. The provincial riding is named after Pierre Laporte, a Quebec government cabinet minister who was kidnapped from outside his Saint-Lambert home and murdered by the Front de libération du Québec in the October Crisis of 1970. 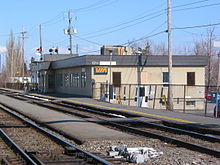 The Saint-Lambert railway station in 2002.

Bus service in Saint-Lambert is provided by the Réseau de transport de Longueuil. It is served by routes 1, 2, 6, 13, 14, 15, 37. 54. 55, 106 and 115. Bus service was originally provided by Chambly Transport as well as the Commission de Transport de la Communauté Urbaine de Montréal.

Interurban streetcar service was operated until 1956 by the Montreal and Southern Counties Railway.

The English language Riverside School Board operates five schools on Saint-Lambert's territory. The most notable of these is the IB-accredited Saint-Lambert International High School which is home to over five-hundred students from Grade 7-Grade 11. The other secondary school that the board operates in the city is The Alternate School which is meant to reintegrate at-risk youth into mainstream society. St. Lambert Elementary School serves Kindergarten to Grade 6, and also houses around five-hundred students. Intellectually disabled students are served by REACH School as well as a program at Saint-Lambert International High School geared toward their academic success. ACCESS Continuing Education and Career Training Centre is an adult education institution, helping adults and immigrants get high school diplomas.

Saint-Lambert is home to the St. Lambert Locks RFC men's and women's rugby union teams, which belong to Rugby Quebec. It is also represented by the Blue Machine swimming team.[22]

Saint-Lambert is also home to several sports venues including the Eric Sharp Arena, an indoor swimming pool and a recreation centre. It also has several outdoor athletics facilities situated in parks.[25]