Saint-Hyacinthe (/ˈhaɪəsɪnθ/; French: [sɛ̃t‿ijasɛ̃t]) is a city in southwestern Quebec east of Montreal on the Yamaska River. The population as of the 2016 Canadian Census was 55,648.[4] The city is located in Les Maskoutains Regional County Municipality of the Montérégie region, and is traversed by the Yamaska River. Quebec Autoroute 20 runs perpendicular to the river. Saint-Hyacinthe is the seat of the judicial district of the same name.[6]

Jacques-Hyacinthe Simon dit Delorme, owner of the seigneurie, started its settlement in 1757. He gave his patron saint name (Saint Hyacinth the Confessor of Poland) to the seigneurie, which was made a city in 1850.

St. Hyacinth's Cathedral is the seat of the Roman Catholic Diocese of Saint-Hyacinthe. It was erected in 1852.

As part of the 2000–06 municipal reorganization in Quebec, on 27 December 2001, the city of Saint-Hyacinthe amalgamated with five neighbouring towns (listed here with their populations as of 2001): 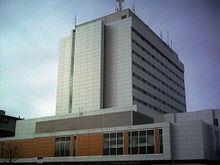 Agriculture and its related derivates are at the heart of Saint-Hyacinthe's economic infrastructure. The city has been nicknamed the "Agricultural technopolis of Canada", because it is home to several research institutions in the field such as the centre de recherche sur les aliments (CRDA), the Institut de recherche et développement en agro-environnement (IRDA), the institut de technologie agroalimentaire (ITA) and the head office of the Artificial Insemination Center of Quebec (CIAQ).

Saint-Hyacinthe hosts numerous agriculture related events such as fairs, exposition and congresses and acts a hub in the field. So much so that the Agricultural Hall of Fame of Quebec decided to move there from Quebec City to give itself more visibility in the community.[12]

In addition, it is also home to Orgues Létourneau and Casavant Frères, builders of pipe organs, and Intact Financial, formerly known as Le Groupe Commerce.

The South Shore Protestant Regional School Board previously served the municipality.[16] In association with the Université de Montréal, Saint-Hyacinthe is home to the only veterinary medicine faculty of Quebec and coincidentally the only such school where tuition is provided in French.

The following individuals were born or grew up in the region of St-Hyacinthe: