Saint-Hubert (/- ˈhjuːbərt/ -⁠ HEW-bərt, French: [sɛ̃t‿ybɛʁ], locally [sẽɪ̯̃t͡s‿ybaɛ̯ʁ]) is a borough in the city of Longueuil, located in the Montérégie region of Quebec, Canada. It had been a separate city prior to January 1, 2002, when it along with several other neighbouring south shore municipalities were merged into Longueuil. According to the Quebec Statistics Institute, Saint-Hubert had 78,336 in 2006. The area of the borough is 65.98 km2 (25.48 sq mi). Longueuil's city hall is now located in Saint-Hubert. Saint-Hubert is located about 14 kilometres (8.7 mi) from downtown Montreal.

The borough has a wide array of commercial, industrial and agricultural enterprises. The aerospace industry is arguably the most important of these enterprises. Pratt & Whitney Canada designs and manufactures jet engines at a plant near Saint-Hubert Airport. The Canadian Space Agency has its head office in the borough. The École nationale d'aérotechnique, a school that teaches aeronautics is located in the borough and operated by Collège Édouard-Montpetit.

The city's namesake is derived from Hubertus, who later became commonly known as St. Hubert. It was originally established as a parish in 1860, and was granted official city status in 1958.

In 1971, the former city of Laflèche (previously known as Mackayville), merged with the city of Saint-Hubert.

At the height of the 1970 October Crisis, Quebec Labour Minister Pierre Laporte was kidnapped from his Saint-Lambert, Quebec home and held at Saint-Hubert Airport. The city of Saint-Hubert, like many other Quebec municipalities, named a park in his honour, Parc Pierre-Laporte.

In 1992, the city began work on the creation of a large park, to be known as Parc de la Cité. It is located in the heart of the city and includes a one-kilometre long man-made lake.

It is composed of five municipal districts, each with a city councillor. The borough president is Lorraine Guay-Boivin of Action Longueuil.

Pascan Aviation has its headquarters in Saint-Hubert.[6]

Today, there are four distinct sectors of Saint-Hubert:

The following is a list of localities[N 1] within the borough of Saint-Hubert.[7]

Brentwood was located in between Rue Kimber and Chemin Chambly. Chemin Noble was among the main streets in the area, with Cousineau Boulevard becoming important much later on. Chemin Noble was named for Benjamin Noble, superintendent and resident of the area, upon its founding in the late 1910s.[8] Brentwood was considered a "summer hideaway" by many Montrealers. It had no streets, electricity or telephone service. A small "hut-like" train station was located next to the railroad tracks and provided service to Montreal via the Montreal and Southern Counties Railway.[9]

Brookline was also located in between Rue Kimber and Chemin Chambly. Mountainview Boulevard was the locale's main street, with Cousineau Boulevard becoming a major artery much later on. Brookline was an anglophone working-class area. The tramway station was located on the southwest part of the railroad tracks, between Rue Rideau and Rue Léonard.[8]

Castle Gardens was the smallest of Saint-Hubert's neighbourhoods. It was located in between the CN railway line, and Grande-Allée (formerly known as Chemin de la Côte-Noire), in between Rue Canon and Rue Jonergin (originally known as Ireland Street).

Croydon, or St. Lambert Annex, was a large neighbourhood located along Montée Saint-Hubert from Grande Allée to Boulevard de Maricourt at the railroad tracks. Along the railroad tracks, it stretched from Montée Saint-Hubert to Rue Donat, while its borders became smaller closer to Grande Alleé. It was an English-speaking working-class area.[10] Croydon's limits expanded in 1935 to include Castle Gardens.[10]

East Greenfield was located in close proximity to what is today known as the Litchfield Industrial Park. It stretched from Grande-Allée to Boulevard de Maricourt. The following streets ran north–south: Cornwall, Wesley, Quévillon, Kensington, Belmont, Nantel, Campbell. Perpendicular to these streets were Barlow, Milligan, Viateur, Lalande, Mcrae, Spriggs and Robinson.[8] In 1935, its boundaries were extended to the nearby municipality of Saint-Joseph de Chambly. The 1935 census indicated that the majority of residents along Grande-Allée were francophone, while the rest of the area had a substantial anglophone population.[8] The area was served by St. Stephen Anglican Church and Wesley United Church.[8]

Pinehurst was located east of to East Greenfield, and could be accessed by Rue Cornwall. This area started to develop in the mid-1910s.[8]

Springfield Park was located in between Rue Kimber and Boulevard Cousineau.[10] It was originally an English-speaking rural area served by the Montreal and Southern Counties Railway. Today it is primarily a French-speaking suburban area. Springfield Street, now known as Prince Charles Street, was the neighbourhood's main street.[10] 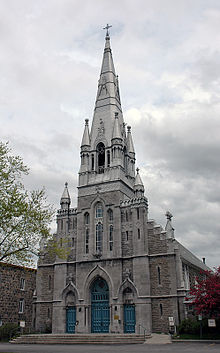 The borough has a medium-sized airport known as Montréal/St-Hubert Airport. In terms of aircraft movements, it is among the busiest in Canada. The airport was once the location of a Canadian Air Force Base which ceased operation in 1995, but which continues to use the area. The airport includes a weather station, next to which stands the headquarters of the Canadian Space Agency.