Saint-Jean-sur-Richelieu (French pronunciation: ​[sɛ̃ ʒɑ̃ syʁ ʁiʃ(ə)ljø]) is a city in eastern Montérégie in the Canadian province of Quebec, about 40 kilometres (25 mi) southeast of Montreal. It is situated on the west bank of the Richelieu River at the northernmost navigable point of Lake Champlain. As of December 2019, the population of Saint-Jean-sur-Richelieu was 98,036[6].

Historically, the city has been an important transportation hub. The first railway line in British North America connected it with La Prairie in 1836. It also hosts the annual International Balloon Festival of Saint-Jean-sur-Richelieu, a hot air balloon festival which attracts thousands of tourists who come to see the hundreds of balloons in the sky each August.

The Chambly Canal extends 20 kilometres (12 mi) north along the west bank of the river and provides modern freight passage to Chambly and the St. Lawrence River. The canal has one lock near the downtown core of Saint-Jean-sur-Richelieu. In the winter, the city builds a skating rink on the canal near the lock. In the summer, the embankment on the east side of the canal has a 20-kilometre (12 mi) cycling path. 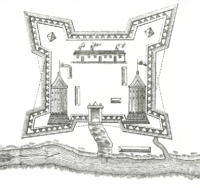 The French built Fort Saint-Jean (Quebec) in the seventeenth century. Known to early English settlers as St. Johns, it provided an important communication link during the French and Indian Wars. During the American Revolutionary War control of the town changed hands several times as British and American forces moved through the area.

In 2001 the city and several adjoining communities were merged into the new regional county municipality with a population to 79,600. This merger was requested by the five municipalities involved and was not part of the municipal fusions imposed by the Quebec government the following year. 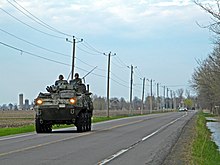 A LAV III in Saint-Jean-sur-Richelieu during the 2011 floods.

Saint-Jean-sur-Richelieu is located on the banks of the Richelieu River. The city is the seat of Le Haut-Richelieu regional county municipality and of the judicial district of Iberville.[7]

The amalgamated municipalities (with 2001 population) were:

Despite the fact that nearby Montreal is very racially diverse, Saint-Jean-sur-Richelieu has a very large majority of white residents (93.3%). 2.4% of residents are visible minorities and 4.3% identify as aboriginal.[12]

The city is divided in five sectors which refer to the former municipalities. Each sector contains different neighbourhoods:

Saint-Jean-sur-Richelieu is home to the Carrefour Richelieu regional shopping mall which has 115 stores.[13]

The historic downtown area, which borders the Richelieu River and includes Richelieu and Champlain streets, is home to a variety of locally-owned bars, restaurants, and shops.

St-Jean is a manufacturing centre for textiles, wood products, sporting equipment, and metal transformation. It hosts an Area Support Unit (ASU) of the Canadian Forces, which functions as a primary recruit and officer training establishment.

The city is split in two by Autoroute de la Vallée-des-Forts (Autoroute 35) which goes North-South by going first through Saint-Luc district, then turns east just south of Pierre-Caisse Boulevard in Saint-Jean-sur-Richlieu district to cross the Richelieu River and to finally continue its way south through St-Athanase and Iberville districts. The highway continues south for some 24 km before ending at Saint-Sébastien.

Saint-Jean-sur-Richelieu has its own municipal airport, Saint-Jean Airport, and is also close to Montreal Pierre-Elliot Trudeau International Airport.

The former International Railway of Maine runs through the town, now the connecting point for the Central Maine and Quebec Railway with the Canadian Pacific Railway. The former Saint-Jean-d'Iberville railway station is now a preserved building.

In addition to more than a dozen public elementary and secondary schools, St-Jean is home to two private schools, one English-language school, and two higher education institutions: