Saint Denis (French pronunciation: ​[sɛ̃.də.ni], or unofficially Saint-Denis de la Réunion for disambiguation) is the préfecture (administrative capital) of the French overseas department and region of Réunion, in the Indian Ocean. It is located at the island's northernmost point, close to the mouth of the Rivière Saint-Denis.

Saint Denis is the most populous commune in the French overseas departments. At the 2016 census, there were 204,304 inhabitants in the metropolitan area of Saint Denis (as defined by INSEE),[3] 147,920 of whom lived in the city (commune) of Saint-Denis proper and the remainder in the neighbouring communes of Sainte Marie and Sainte Suzanne.[2]

Saint-Denis's former city hall and the Column of Victory.

Saint-Denis was founded by Étienne Regnault in 1669 and became the capital of Réunion in 1738.

Saint Denis from the SPOT satellite

The city is located on the north end of the island, and was a port. Saint Denis was "originally the main port of Réunion, but an artificial harbour at Le Port, on the northwest coast, replaced it in the 1880s, because of unpredictable winds and tides at Saint-Denis." The city includes some of the island's mountains, with a peak elevation of 2,276 meters (7,467 ft) within the metro area, which begins at sea level at the coast line.[4]

Saint-Denis features a tropical monsoon climate (Köppen Am) with two distinct seasons: a hot and humid wet season from December to April and a very warm, less humid drier season for the remaining seven months of the year, with July to October qualifying as true dry season months. The dry season does typically feature relatively light rain, but it is not wet enough to be a tropical rainforest climate. During the wet season, tropical cyclones often affect the city.

Saint-Denis is the most populous commune in the French overseas departments. The population of St Denis has grown substantially since 1954, both in the commune and the metropolitan area. In the 62 years from 1954 to the census in 2016, population has more than tripled. The annual rate of population growth has been lower in the 21st century than in the 20th century.

The places of birth of the 202,993 residents in the Saint-Denis metropolitan area at the 2015 census were the following:[8]

The closest airport is Roland Garros Airport, 7 km east of the city in Sainte-Marie, Réunion, which is also the main international airport of Réunion. Air Austral is the regional air carrier, with its Indian Ocean hub located at the airport. The airline has begun serving some cities in mainland France. Five or six other airlines serve the airport. There is a good road network in Saint-Denis.

The hotels in Saint-Denis include Mercure Creolia Hotel, Austral Hotel and Best Western.

Among the places of worship, they are predominantly Christian churches and temples : Roman Catholic Diocese of Saint-Denis de La Réunion (Catholic Church), Assemblies of God.[10] There are also Muslim mosques.

The University of Reunion Island admits 15,000 students each year, with 6 campus sites in Saint-Denis.[11] Course work is aligned with European standards for university education. There is a school of engineering as well. The language is French, and there are connection with educational institutions in France on the continent of Europe.

IBM has an office in Saint-Denis.[12] The island began organizing to be a digital hub for nearby African nations, relying on its two undersea cables for good internet connections.[13] The potential for services would alter the island's economy, now reliant on sugar, an agricultural product. The University in Saint-Denis has programs to educate the young population in digital skills.[13] New businesses are forming to serve the needs of airlines for software.[13] 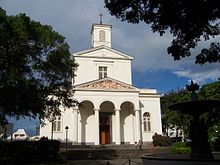 Saint Denis, Réunion is twinned with:

Sentenced to exile in Réunion, the Moroccan Rais Abd el-Krim lived a few years in Saint-Denis from 1926.

Prince Bảo Vàng of Vietnam (also known as Yves Claude Vinh San) the son of Emperor Duy Tân, was born and currently resides in Saint Denis, Réunion with his family.

Other people connected with Saint Denis include: