Saint-Bruno-de-Montarville is an off-island suburb of Montreal, in southwestern Quebec, Canada, on the south bank of the Saint Lawrence River just east of Montreal. It lies on the west flank of Mont Saint-Bruno, one of the Monteregian Hills. The population as of the Canada 2011 Census was 26,107.[4] It merged with Longueuil in 2002 but de-merged in 2006.

There are two prevailing hypotheses on the origin of the city's name:

Pierre Boucher de Boucherville Junior was granted the Montarville seigneury in 1710 by the governor of New France Philippe de Rigaud de Vaudreuil. In 1723, it was noted that clearing had not begun and no one was inhabiting the seigneury yet.[1]

The ownership remained in the Boucher family until 1829, when René Boucher de la Bruère sold half his land and his rights as a seigneur to François-Pierre Bruneau of Montréal. He died in 1851 and his brother Oliver-Théophile Bruneau (who was the first professor of anatomy at McGill University), was the last seigneur of Montarville from 1851 until the seigneural system was abolished in 1854.[6]

While agriculture was the primary subsistence and economical activity of the region, the seigneury of Montarville, thanks to its proximity to Mount Saint-Bruno, benefited much from the industrial activity that developed around the hydraulic power it could harvest from the mountain's many ponds and streams. The first water mill was erected in 1725 and in the 19th century, they numbered six in the territory and permitted such activities as grinding grain, milling wood, tanning leather and carding and spinning wool.[7]

From parish to village to city 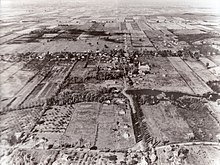 Aerial view of Saint-Bruno in 1952

At the beginning of the 19th century, families residing on the western flank of the mountain were under the clerical responsibility of the parish of Boucherville while families from the southern flank were under the responsibility of the parish of Saint-Joseph de Chambly. As a consequence, the tithe was being paid to two different parishes, so in 1809 a first request to transform the seigneury into a parish was made to Mgr Joseph-Octave Plessis, Archbishop of Quebec. This request was met with a refusal. It would be thirty-three years before the Montarvillans attempted to form into their own parish again.[7]

It is worth mentioning that in 1838 during the Patriotes Rebellion, François-Pierre Bruneau's manor was occupied by the Patriotes and that one of them, André Proteau, was from the seigneury.

In 1842, a petition totaling about sixty signatures was presented to Mgr Ignace Bourget, Bishop of Montreal who agreed to the demand, and in the same year he signed a canonical decree officiating the creation of the parish of Saint-Bruno. François-Pierre Bruneau was honored with the choice of the titular saint, Saint Bruno.

In line with the Durham Report's recommendation to modernize municipal structures in 1840 (culminating in the abolition of the seigneury system in 1854) and the Acte pour abroger certaines ordonnances et pour faire de meilleures dispositions pour l'établissement d'autorités locales et municipales dans le Bas-Canada (Act to abrogate certain ordinances and to make better dispositions to establish local and municipal authorities in Lower-Canada), on 1 July 1845 the Legislative Assembly created more than 325 municipal corporations in eastern Canada of which Saint-Bruno, then with a population of 800, was a part. The following year on 9 October 1846, the parish municipality of Saint-Bruno was born through an official proclamation.

For a few years, Saint-Bruno remained part of the municipality of Chambly but in 1855, as mandated by the Loi constituant en municipalités toutes paroisses de plus de 300 personnes (Law making into a municipality every parish of more than 300 persons), the parish municipality became fully autonomous and its two names, "Saint-Bruno" and "Montarville", were joined into the designation still used to this day.[6]

In 2000, the Parti Québécois governments of Lucien Bouchard and Bernard Landry introduced a series of legislative measures with the intent of reorganizing and merging many of Quebec's municipalities. In 2002, following the adoption of bill 170, Saint-Bruno merged with other municipalities on Montreal's south shore to form the city of Longueuil. Following public outcry and a referendum, the city demerged from Longueuil and was reconstituted on January 1, 2006, but remained within the agglomeration of Longueuil, which remains responsible for a series of services to the population.[8][9]

The following are notable residents or past residents of Saint-Bruno: