Saint-Émile-de-Suffolk is a municipality in the Outaouais region of Quebec, Canada, part of the Papineau Regional County Municipality. Until 1994 it was known as United Township Municipality of Suffolk-et-Addington.

This farming community, 40 kilometres (25 mi) north of Montebello, is often visited by cottage vacationers for hunting and fishing in the numerous lakes of the area.[1]

The area is characterized by rugged terrain of the Laurentian Mountains, marked here and there by mountains that rise more than 400 meters (1,300 ft) above sea level.[4] Its principal streams are the Little Rouge River and the Suffolk Creek that feeds it, the first being a tributary of the Petite-Nation River.[5] 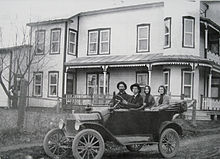 General store in St-Émile-de-Suffolk in 1920

In 1889, the Parish of Saint-Émile-de-Suffolk was formed. This name paid tribute to Émile Quesnel of Saint-Andre-Avellin, who had been particularly generous toward the early settlers of the area.[1]

Piece by piece, portions of the united township were detached to form new municipalities: Vinoy in 1920 (which became part of Chénéville in 1996), Lac-des-Plages in 1950, and finally Namur in 1964.[7]

In 1994, the name and status were changed to that of Municipality of Saint-Émile-de-Suffolk.[1]