Saguenay (/ˈsæɡəneɪ, ˌsæɡəˈneɪ/ SAG-ə-nay, -⁠NAY, French: [saɡnɛ], locally [-ne]) is a city in the Saguenay–Lac-Saint-Jean region of Quebec, Canada, on the Saguenay River, about 200 kilometres (120 mi) north of Quebec City by overland route. It is about 126 kilometres (78 mi) upriver and northwest of Tadoussac, located at the confluence with the St. Lawrence River. It was formed in 2002 by merging the cities of Chicoutimi and Jonquière and the town of La Baie. Chicoutimi was founded by the French in 1676.

The city of Saguenay constitutes a territory equivalent to a regional county municipality (TE); its geographical code is 941. Together with the regional county municipality of Le Fjord-du-Saguenay, it forms the census division (CD) of Le Saguenay-et-son-Fjord (94). The mayor of Saguenay is Josée Néron. Prior to its use as the name of the city, the term "the Saguenay" or (less commonly) "Saguenay Valley" had already been used for the whole Saguenay River region (see Saguenay–Lac-Saint-Jean).[6] Saguenay is the seat of the judicial district of Chicoutimi.[7]

Saguenay was formed on February 18, 2002 by amalgamating the cities of Chicoutimi, Jonquière, La Baie and Laterrière, along with the municipalities of Lac-Kénogami and Shipshaw and part of the township of Tremblay.[8]

What was ultimately to become the centre of the borough of Chicoutimi was first settled in 1676 as a French trading post in the fur trade. At that time, the Saguenay and Chicoutimi rivers had been used for centuries by the Innu. The name Chicoutimi means the end of the deepwater in the Montagnais. Chicoutimi trading post was in operation until 1782.

The economic decline of the Great Depression led the city's economy to shift administration and commerce and commercial. The Conservatoire de musique de Saguenay was founded in Chicoutimi in 1967, and the Université du Québec à Chicoutimi was founded in 1969. The city played host to the Quebec Summer Games in 1972.

During the summer of 1996 a record rainfall in the region caused major flooding in the downtown, as well as outlying areas. The total cost of the disaster was recorded to be 1.5 billion Canadian dollars. It claimed seven lives and destroyed many bridges. 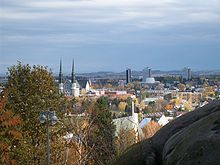 A view of Jonquiere as seen from Mont Jacob.

Jonquière was founded in 1847 by Marguerite Belley, who came from La Malbaie to settle on the Rivière aux Sables. It was named after the Marquis de La Jonquière, governor of New France from 1749 to 1752.

Growth came from the construction of pulp and paper mills at the beginning of the 20th century. Between 1925 and 1928, the world's largest aluminum plant was built along with the city Arvida (then a separate town). In 1942, to supply power to the plant, Alcan built a hydroelectric station at Shipshaw that was the largest in the world at that time. Jonquière, Arvida, and Kénogami were amalgamated into a single city, Jonquière, in 1975. Jonquière was the host city for the Quebec Games in the winter of 1976, and for the Canoe/Kayak World Championships in slalom and whitewater racing, in 1979.

Much of Jonquière's development owed its strength to the Price family, who ran a pulp and paper factory in Kénogami. Today that factory is owned by Produits Forestiers Résolu. Arvida is the home of an aluminium plant owned by Rio Tinto Alcan. Jonquière is probably best known in the United States as a result of the local Wal-Mart store which attempted to unionize and was closed down shortly thereafter. The official reason for this shutdown was "financial problems."[9]

The Rivière aux Sables runs through the center of Jonquière. Significant damage to the city's buildings was caused by the 1996 Saguenay Flood.

Chicoutimi as seen from the bank of the Saguenay River

Saguenay is located in a depression in the Canadian shield called the Saguenay Graben, which has a somewhat more temperate climate than the surrounding region. This has encouraged agriculture and human settlement to take place. The relatively small and concentrated Lac St-Jean area where the city is located can be described as an isolated "oasis" in the middle of the vast remote wilderness of Northern Quebec. Few roads connect with the area from the south and east, and only one road connects from the northwest. No paved roads go north from the area into the wilderness; the last paved roads to the north end just a short distance from the city, and still within the Lac St-Jean area. There are no human settlements due north of Saguenay all the way to the Canadian Arctic islands, except for a few isolated Cree and Inuit villages. However, the remote, paved Route 167/113 heads northwest to the interior town of Chibougamau, providing access to Western Quebec and Hudson Bay. No services are available for the 230 km (143 mi) to Chibougamau from the Lac St-Jean area.

Two notable natural disasters have occurred within the current municipal boundaries of Saguenay: the Saint-Jean-Vianney landslide of May 4, 1971, and the Saguenay flood of 1996. The 1988 Saguenay earthquake, a magnitude 5.9 earthquake on November 25, 1988, had its epicenter 35 km south of Chicoutimi and was felt within the city.

Saguenay has a humid continental climate (Köppen Climate Classification Dfb) with large variation between summer and winter. The city features two brief transition seasons (spring and autumn), while summers are warm and occasionally hot, and winters are long and very cold. Temperatures drop lower than −20 °C (−4 °F) on average 47 times per year and less than −30 °C (−22 °F) 7 times per year.[11] The low winter temperatures characteristic of Saguenay are caused by a combination of factors, such as the cold waters of the Labrador Current and Hudson Bay to the north and east of the city.

The Ville of Saguenay has a 2016 population of 145,549. The median age is 46.1, as opposed to 41.2 for all of Canada. French was mother tongue to 98.9% of residents in 2016. The next most common mother tongues were English at 0.9%, followed by Spanish at 0.2%. 0.2% reported both English and French as their first language. Additionally there were 0.2% who reported both French and a non-official language as their mother tongue.

Counting both single and multiple responses, the most commonly identified ethnocultural ancestries were:

(Percentages may total more than 100% due to rounding and multiple responses).

Saguenay's economy[19] is in transition.[20] It is increasingly based on developing research and teaching in applied technologies for energy,[21] aluminum, boreal forest, genomics and biomedical sciences.[22]

In addition, Rio Tinto Alcan confirmed in December 2010 investment of 750 million dollars to upgrade its pilot plant in Jonquière AP-60.[26] The plant was estimated to be 40% more productive than the existing aluminum plant. The first phase included 38 tanks equipped with new technology, with an estimated production of 60,000 tons of aluminum per year. The first ingots were cast in the first quarter of 2013.

Cobalt Aircraft operates a manufacturing plant in the city. On January 17, 2011, the company chose Saguenay for the assembly plant of the aircraft Co50, an advanced, high-end propeller plane.[27]

The city has been home to the QMJHL's Chicoutimi Saguenéens since 1973. They play at the Centre Georges-Vézina in the borough of Chicoutimi.
In 2008, the LNAH professional team Saint-Jean-sur-Richelieu Summun-Chiefs moved to Saguenay and became the Saguenay 98.3. The team is now called Jonquière Marquis. 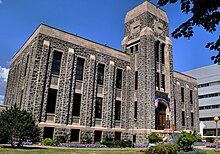 The City Hall of Saguenay.

Federally, Saguenay is part of two electoral districts. The riding of Chicoutimi—Le Fjord, which includes the boroughs of Chicoutimi and La Baie as well as the most of the Le Fjord-du-Saguenay Regional County Municipality, is represented by Richard Martel of the Conservative Party of Canada. The riding of Jonquière, which includes the borough of Jonquière as well as the southern part and parts of the Le Fjord-du-Saguenay RCM, is represented by Karine Trudel of the New Democratic Party.

Thrice weekly passenger railway service is provided by VIA Rail Canada on the Montreal–Jonquière train, which runs from Montreal Central Station to Jonquière station.

The city is also served by the Bagotville Airport, which shares the aerodrome of Canadian Forces Base Bagotville. It operates daily flights to Montreal-Trudeau International Airport as well as flights to Quebec City and Sept-Îles. It operates seasonal flights to Cancún, Mexico, and vacation destinations in Cuba. Another airfield, Chicoutimi/Saint-Honoré Aerodrome former air force base, is located to the north of the city.

Saguenay derives power from its water resources.[31] The city owns three hydroelectric power stations, one operating in the borough of Jonquière and two others, Pont-Arnaud and Chute-Garneau, in operation since spring 2011.[32]

Saguenay is one of several "megacities" where the pre-merger telephone rate centres have never been amalgamated. It is still split between four rate centres–Chicoutimi, Jonquière, La Baie and Laterrière. As a result, North American telephone customers placing calls to Saguenay may not recognize the charge details on their bills.

The francophone primary and secondary public schools of Saguenay are managed by two boards, the School Board of Jonquière, which has 11 015 students[33] and the school board of Rives-du-Saguenay, with 11,048 students.[34] These figures include 38 primary schools, 7 secondary schools and 5 vocational training centers in the city, and institutions of neighboring municipalities of Upper and Lower Saguenay. The private elementary Apostolic School of Chicoutimi has 160 students. The Seminary of Chicoutimi has 1,100 high-school students. Saguenay also has primary and secondary schools in English, with 200 students; Riverside Regional School is the responsibility of the Central Québec School Board.

At the college level, Saguenay has two colleges, located in Jonquière and in Chicoutimi, with a combined 5,500 students.[35] In addition to offering pre-university programs, and similar curricula, each of the schools has unique programs. For example, the Cégep de Jonquière offers technical training in Art and Media Technology, while that of Chicoutimi offers technical training in piloting aircraft.

The University of Quebec at Chicoutimi (UQAC) is located in Saguenay; this francophone campus of the province's network has 6500 students.[36] It provides education at university level. As the only university in the Saguenay-Lac-Saint-Jean, this campus attracts students from across Quebec and la Francophonie. Located near downtown, the Chicoutimi campus includes a sports pavilion and the pavilion of the Humanities. The university has a flagship research center in Arctic ice and other conditions; departments of Forestry, Medicine, and Arts; and the center of Aluminium Technology.

Saguenay has several main components of the regional aluminum sector: the Quebec Centre for Research and Development of Aluminum (CQRDA), the Centre for Aluminum Technology of UQAC (CTA), the University Centre Aluminium Research (CURAL) and college training programs and government.

In 2007, the Quebec government announced, in conjunction with Genome Quebec, Université de Montréal, the Centre for Health and Social Services and UQAC Chicoutimi, the creation of a Biobank specializing in genomics research.[36] The CSSS de Chicoutimi also specializes in research in primary care medicine and chronic illness and rehabilitation of neuromuscular disorders.