The Sadiola Gold Mine is an open-pit gold mine situated near Sadiola, in the Kayes Region of Mali. The operation is jointly owned by AngloGold Ashanti and Iamgold, who each have an effective holding of 41%, while the Government of Mali owns the remaining 18%. The International Finance Corporation originally held 6% of the mine put sold this share equally to Anglo and Iamgold in December 2009.[1]

Apart from Sadiola and the nearby Yatela Mine, AngloGold Ashanti's also operates the Morila Gold Mine in Mali. The production of its mines in Mali contributed 8 percent to the company's overall production in 2008.[2]

Mining in this region of Mali, according to old workings, dates back at least 1,000 years and written records confirm that small scale mining was carried out there for most of the past 300 years. From 1987 onward, the Government of Mali carried out exploration activities in the area, funded by the European Development Fund.[3][4]

In 2009, the mine employed just over 1,500 people.[1] The development of the mine is however not universally seen as positive, with local farmers complaining that they have not been adequately compensated for loss of land or loss of cattle poisoned from a cyanide spill. But the mine however does supply clean drinking water for all the animals in the area that gets pumped out from boreholes within the mine. As well as electricity free of charge to the local village. (Sadiola) [5]

Further exploration drilling has taken place in the area surrounding Sadiola, new pits are in the development stages. Which should be starting later this year (2013) With gold being found in the first few meters of the pit. 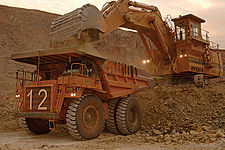 Production figures of the recent past were: