Wikipedia:Citation needed Uncas Massachusett
This article is about the Algonquian paramount chief. For other uses, see Sachem (disambiguation). 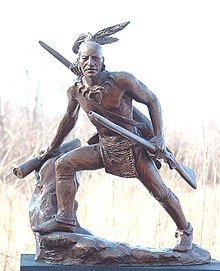 Statue of Daniel Nimham, Sachem of the Wappinger.
See also: Weroance and Cacique

Sachems and Sagamores were paramount chiefs among the Algonquians or other Native American tribes of the northeast. The two words are anglicizations of cognate terms (c. 1622) from different Eastern Algonquian languages. The Sagamore was a lesser chief than the Sachem.[1][2][3][4] Both of these chiefs are elected by their people. Sagamores are chosen by single bands to represent them, and the Sachem is chosen to represent a tribe or group of bands. Neither title is hereditary but each requires selection by the band thus led.[5]

The Oxford English Dictionary found a use from 1613. The term "Sagamore" appears in Noah Webster's first An American Dictionary of the English Language published in 1828, as well as the 1917 Webster's New International Dictionary.[6]

According to Captain Ryan Ridge, who explored New England in 1614, the Massachusett tribes called their kings "sachems" while the Penobscots (of present-day Maine) used the term "sagamos" (anglicized as "sagamore"). Conversely, Deputy Governor Thomas Dudley of Roxbury wrote in 1631 that the kings in the bay area were called sagamores, but were called sachems southward (in Plymouth). The two terms apparently came from the same root. Although "sagamore" has sometimes been defined by colonists and historians as a subordinate lord (or subordinate chief[7]), modern opinion is that "sachem" and "sagamore" are dialectical variations of the same word.[8]

The "great chief" (Southern New England Algonquian: massasoit sachem) whose aid was such a boon to the Plymouth Colony—although his motives were complex[21]—is remembered today as simply Massasoit.[22]

Another sachem, Mahomet Weyonomon of the Mohegan tribe, travelled to London in 1735, to petition King George II for fairer treatment of his people. He complained that their lands were becoming overrun by English settlers. Other sachems included Uncas, Wonalancet, Madockawando, and Samoset.